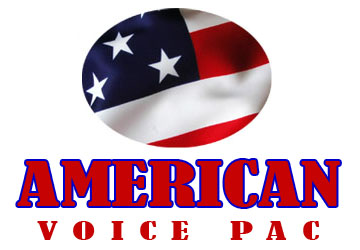 I’m excited to announce that this fall, I’m involved in a project which could have some far-reaching consequences both here in Louisiana and nationally. The project is a political action committee called American Voice PAC, and it’s something a bit different than other PAC’s you might see.

American Voice PAC is more than an operation that raises money and buys ads promoting candidates. We will be actively educating the public in conservative principles and ideas, and turning those principles into concrete results – not just on Election Day, but within our political culture!

Most of you know that I’m committed to changing the political culture to better reflect the values our society was founded by getting solid conservatives elected to office. American Voice PAC shares that mission.

My partner in American Voice PAC is the Rev. C.L. Bryant, who most of you know from his national media appearances and outstanding documentary film Runaway Slave. C.L. isn’t just a major player on the national conservative scene due to his speaking appearances and filmmaking exploits, though – this fall he’s debuting a syndicated talk radio show to increase his ability to educate the public on conservative ideas and values.

In his capacity as a radio show host, C.L. will work with American Voice PAC in the same vein as I will through the Hayride. The PAC will translate the message of both the radio show and the conservative political site into political action.

We will get involved in races in the 2014 election cycle. There are Democrats in office, like Mary Landrieu, Kay Hagans and Mark Pryor, who shouldn’t be. With your help we’ll introduce some creative and spirited messaging into the races we can make a real difference in.

But we’ll do more. Much more.

American Voice PAC is devoted to reaching into underserved local communities. We will develop leaders and activists in those communities, and we will push messaging to create conservatives where few currently exist. “How?” you ask. By exposing the failures of the Left to serve those communities as constituents. There are multitudes of examples of such failures, especially in the black community, among Hispanics, among single women, among gays, and in the working class.

American Voice PAC will pick up the standard of the @large Conference, which generated a newsmaking success earlier this year when Louisiana state Sen. Elbert Guillory made national headlines by switching from the Democrat Party to the GOP. @large is destined to become a bigger, better and more significant event on the national conservative scene, and American Voice PAC will provide the institutional infrastructure to create that growth.

American Voice PAC will promote conservative activism and apply constant pressure on the Left to account for their poor performance. We’ll never let up. We’ll be on offense, not defense. We’ll work to change the political landscape.

But to make these things happen requires a start. And that’s where you come in.

We’re in contact with several potential large donors, and we’re currently building a Board of Directors for American Voice PAC. But in advance of that, your participation can speed our development and build our infrastructure.

We’re working on planning @large for 2014 and lining up speakers and dates right now. We’re building a web site And we’re working on building a network of activists who can help us move the culture in the directions America requires.

At the link below, you’ll see several levels of contribution. Each carries a commensurate level of benefit.

The top contribution level, and the one which brings with it the maximum level of benefits, is our $1000 Inner Circle level. American Voice PAC Inner Circle members are invited to our periodic Inner Circle Summit functions, which will be informal-but-exclusive events at which members will interact with invited political figures and other dignitaries over dinner and drinks. They’ll be a way to meet and evaluate candidates American Voice PAC is considering support for, network with like-minded professionals and share fellowship with patriots like yourself. As a member of our Inner Circle, you’ll also receive two VIP passes to next year’s @large conference.

If you’re able, I challenge you become a Founding Member of American Voice PAC for $500. By joining us at that level, you’ll receive two VIP passes to next year’s @large Conference, which will enable you to meet and interact with some of our well-known speakers and participants at next year’s conference, plus we’ll throw in a personalized DVD of C.L.’s film Runaway Slave.

If you’re not able to join us as a Founding Member, we’ve also created a $100 @large Committee level. By supporting American Voice PAC at that level, you’ll receive an advance ticket to next year’s @large conference and a personalized DVD of Runaway Slave.

Please join us on this journey to save this country. With your help, we’ll accomplish great things!

Interested in more national news? We've got you covered! See More National News
Previous Article Certain People Should Not Opine About Politics…
Next Article Caleb The Camel Is Back – And You’ll See Him At The Picture-Show