At a meeting of the Baton Rouge Rotary Club today, Portland-based city planner John Fregonese – who has been paid some $200,000 so far by the East Baton Rouge Parish government for his work on something called the FutureBR project – trashed the proposal to incorporate the city of St. George as a “calamity.”

“It’s going to cause a major catastrophe for the finances of this parish,” said Fregonese, a consultant who served as the master planner for the parish’s FuturEBR plan.

Fregonese described the proposed incorporation of the new city as a “grenade” that would destroy the progress Baton Rouge has made in recent years. The “financial calamity” could prevent the parish from moving forward with plans ranging from the redevelopment of the Nicholson corridor, to the creation of the South Medical District.

Naturally, of course, Fregonese offered no basis for the figure he offered as to the impact St. George would have on the EBR budget. He said it would pull $90 million out of the parish’s coffers.

So – a wild, unsupported allegation by someone with a contract with the current mayor-president.

We’re not even going to get into de-bunking Fregonese’s numbers, because without anyone coming forward to support them there is nothing to examine. At least we can say with some confidence that they’re not based on a dynamic analysis of the economic effects of St. George – what happens if St. George actually becomes an economic growth engine for East Baton Rouge Parish and arrests the stagnation of the parish’s tax base while Ascension and Livingston Parishes reap the benefits?

Interestingly enough, no sooner could the status quo crowd crack a big smile from their outside spokesman’s big swing than something else surfaced which restated the entire point behind why there’s a movement to incorporate St. George in the first place. 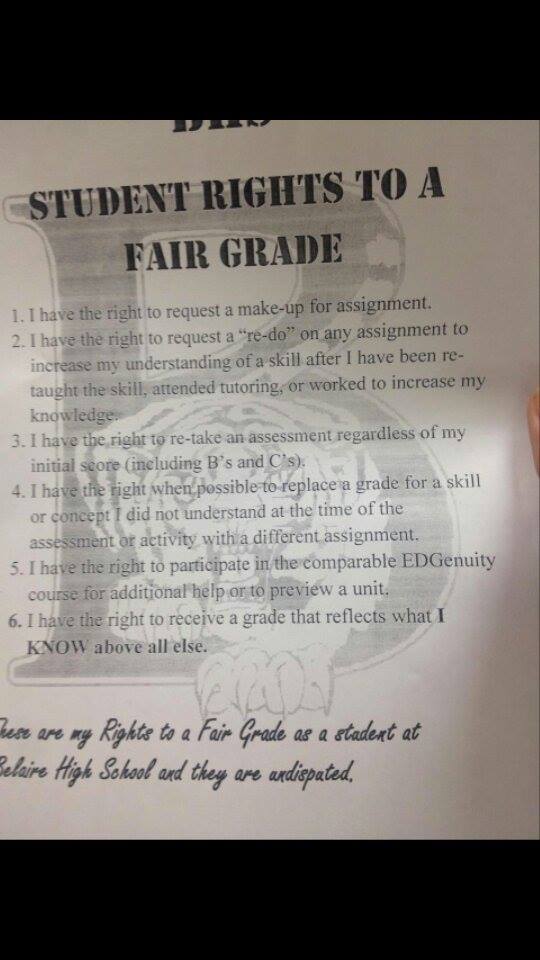 Channel 2 in Baton Rouge had a report on the Students’ Rights to a Fair Grade at Belaire and Tara High Schools in today’s 6:00 newscast. It was a bit of a bombshell.

The long and short of this idiocy is that some administrators at Belaire and Tara decided to promulgate it, with the blessing of the district superintendent Bernard Taylor. By “blessing,” we mean that Taylor sent his underlings out to train teachers and principals from across the district in the new policy…

Some students questioned if this new policy is fair for those already applying themselves and making good grades.

“If you don’t do it the first time and you have no intentions of doing it, why get a second chance,” asked Ekeidra Lanehart, a Belaire senior.

Other schools in East Baton Rouge Parish plan to roll out similar policies.

And while Louisiana Education Secretary John White had no comment to Channel 2, we’re told that behind the scenes White is absolutely nuclear about the idea that kids who screw around and make lousy grades would essentially have the right to do-overs until they can earn the same grades as kids who actually do their work the first time.

And you’ll notice the “rights” include re-taking assessments – which isn’t so much a right of students as it is a right for teachers and the school to avoid accountability for the state’s performance metrics.

That’s the East Baton Rouge Parish school system for you. It’s why the people in St. George are signing that petition.

And it’s why the folks at City Hall are bringing Fregonese in from Portland to scare people about calamities and hand grenades.