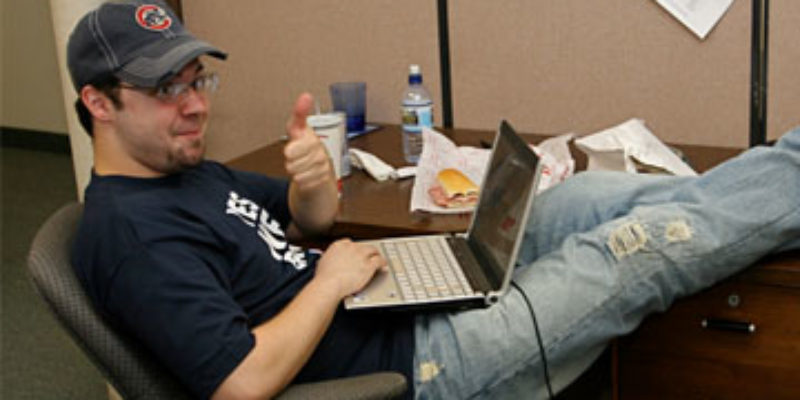 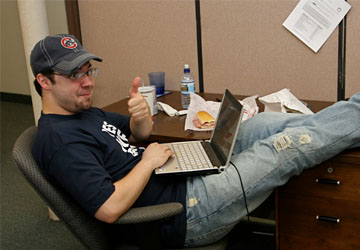 We first introduced our readers to Andrew Zucker a couple of weeks back when he launched a Twitter project attempting to troll conservatives and Rob Maness supporters into hammering Bill Cassidy. Zucker, who is working for the state Democrat party under the guise of something called Campaign For Louisiana, is a leftist political operative who cut his teeth working for unions in Ohio and arrived on the scene after working for Ed Markey’s Senate campaign.

Ed Markey being perhaps the single most unhinged opponent of the domestic oil and gas industry in American politics, and Andrew Zucker is fresh from helping to put him in the Senate. Now he’s here in Louisiana, carpet-bag in hand, in an effort to save Mary Landrieu’s career.

When we got hold of Zucker’s attempts a couple of weeks ago to set fires in the conservative camp to sabotage Cassidy and publicized what he was doing, he shut down the @libbillcassidy Twitter account within hours.

What do New Jersey Gov. Chris Christie, Virginia Gov.-elect Terry McAuliffe and Louisiana Congressman-elect Vance McAllister all have in common? Each opposed shutting down the government. Each campaigned on expanding Medicaid for tens of thousands in their states or districts. And each were winners at the ballot box in recent weeks.

In the Louisiana fifth-district congressional special election, Vance McAllister embraced expanding Medicaid and “said the move is necessary because it would provide coverage” to hundreds of thousands of Louisianians. McAllister didn’t just endorse expanding insurance for hundreds of thousands of Louisianians; he used the issue as the main point of contrast between him and his opponent over the final weeks of the election.

Support for Medicaid expansion was Vance McAllister’s closer. And he won by 20 percentage points – a landslide win.

His overwhelming victory supports what polls have indicated for months: voters don’t want to repeal Obamacare, like Sen. Mary Landrieu they want to fix it so that it works for as many Louisianians as possible, and they support expanding insurance through Medicaid at virtually no cost to taxpayers. In fact one such poll by the Joint Center for Political and Economic Studies showed that Louisianians support Medicaid expansion by a staggering 55 to 23 percent margin.

Not only is support for Medicaid expansion a political winner, it’s also the right thing to do.

While states that did expand Medicaid report huge numbers of new enrollees in the program – nearly 40,000 in Kentucky and almost 65,000 in Arkansas – Cassidy’s opposition to the program is well documented, and his incendiary comments about it are out of touch with Louisiana families.

Cassidy isn’t just opposed to expanding Medicaid today; he’s vehemently against it. As other Republicans are breaking party lines to expand Medicaid for tens of thousands of their constituents, Bill Cassidy is putting politics first and opposing expanding insurance for Louisianians without offering any sort of solution beyond boilerplate talking points.

Between Bill Cassidy’s inexplicable 180 when it comes to health care reform, opposition to expanding health insurance for nearly 250 thousand Louisianians and refusal to offer a substantive solution that would insure those who otherwise can’t afford health insurance, Cassidy has latched onto an issue that is a clear political loser, and also reinforces his growing reputation as a politician who can’t be trusted to fight for Louisiana.

So that’s Andrew Zucker’s opinion. He obviously thinks it’s good policy and good politics to put as many people as possible on government health care in Louisiana – despite the fact that Medicaid reimbursement rates to doctors (as Cassidy knows well, seeing as though his medical practice has for several decades been based on Medicaid patients) are onerously minimal and despite the estimate by the state Department of Health and Hospitals that the Obamacare Medicaid expansion will cost Louisiana some $1.7 billion over the next 10 years.

And he’d have people believe that the reason Vance McAllister beat Neil Riser by 20 points was the Medicaid expansion – which is as typical as it is easily debunkable.

One wonders whether this genius thinks some of these polls can withstand a public information campaign aimed at making the public understand the actual effects of a Medicaid expansion on access to health care, the medical profession and the state budget – something that is probably overdue and certain to occur in the event he and his friends on the Left attempt to make such an expansion the basis of their defense of Mary Landrieu.

As for Zucker, we’re not the only ones scoffing at his antics. Three weeks ago, when he was flogging a different communique aimed at calling Cassidy a weak candidate, Roll Call’s Stu Rothenberg blew him up as offering “unconvincing partisan spin…”

If you were a Democrat who thought the GOP was heading toward selecting a weak nominee incapable of beating Sen. Mary L. Landrieu, D-La., next year, would you tear down that damaged candidate, knowing that it might bring stronger hopefuls into the race? Or would you keep your mouth shut, so Republicans would nominate the sure loser?

The answer is obvious, which is why all the huffing and puffing by the Campaign for Louisiana, a project of the Louisiana Democratic Party, about how terrible Republican Rep. Bill Cassidy’s Senate campaign is doesn’t make much sense.

It doesn’t make sense, unless, of course, the folks at the Campaign for Louisiana are worried about Cassidy and are simply using every opportunity to try to discredit him. Now that would be shocking, wouldn’t it?

In its Oct. 25 press release, the Campaign for Louisiana described Cassidy’s campaign as “listless” and “in serious trouble,” and the group’s recently appointed communications director, Andrew Zucker, called the three-term congressman from Baton Rouge “a weak and seriously flawed candidate whose campaign is on the ropes.”

If Zucker really believes that, he ought to be praying that Cassidy will be the Republican nominee in 2014 rather than belittle him.

This latest bit won’t be the last we see out of Zucker. His M.O. seems to be to fling fecal matter at the wall until something sticks.

Medicaid expansion as a policy defense of Mary Landrieu’s Obamacare vote, with Vance McAllister as the poster boy for it, hardly looks like the sticky version, though.

Interested in more national news? We've got you covered! See More National News
Previous Article JINDAL: Forget About 2016; The Battle Is In 2014
Next Article Krauthammer: Hillary Is A Paper Tiger, And Any Of The 2016 GOP Hopefuls Can Beat Her