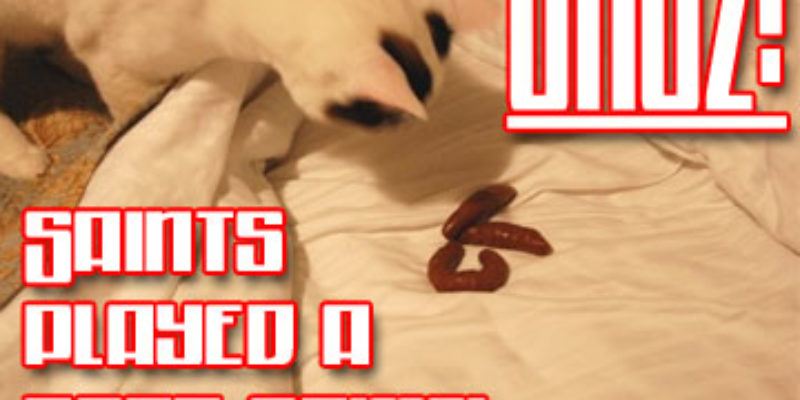 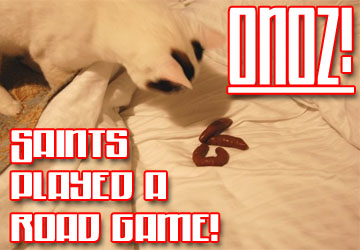 A friend of mine from high school has an interesting theory about the Saints’ road woes.

Before I share his take, allow me to present his credentials: he is a highly educated graduate of one of the most prestigious universities in the south and possesses a medical degree.
His diagnosis?

This sports/politics blogger just so happened to be present at each of the Saints’ four losses this season, thus making me culpable for the defeats, logic is akin to the since exorcised belief that the Saints were a cursed team because the Superdome was built over a graveyard.

This accused albatross takes issue with the accusation as I was safely in the nosebleed section on each occasion and not on the Saints’ offensive line, the true culprits.

While St. Louis has been mathematically eliminated from the playoffs, the franchise has historically given the Black and Gold fits regardless of which time zone they call home or their slim chances of going to the postseason.

Going into the game, Saints head coach Sean Payton was 2-2 against the Rams, with both of those defeats ending eight (2007) and six (2011) losing streaks by St. Louis.

But there may have been more than just a “dignity win” at stake for the home team.

Prior to becoming the toast of the Crescent City, Saints defensive coordinator Rob Ryan had served in that position with the Rams.

For all four days before abruptly tossing his keys on Rams’ head coach Jeff Fisher’s desk and, according to NFL Media columnist Michael Silver, strolled over to a nearby McDonald’s to order a Big Mac. Less than ten days later Ryan was ordering his Number One large sized combo from a New Orleans area Mickey D’s.

Therein lies the most probable reason why Coach Fisher would serve up the “ice cold” dish of an onside kick in the first half of what was for his team a “meaningless game.”

The Saints’ offensive line gave way to the St. Louis Rams defense throughout the game, facilitating the turnovers that made the game far less competitive than the final score implies. The Saints defense had barely caught their breath before having to trot back out on to the field, though they didn’t do much to distinguish themselves either.

However the heart of the Saints’ problems rest with an unreliable offensive line that does not provide quarterback Drew Brees the protection he needs.

So long as Charles Brown remains in the starting lineup, the Saints will not accomplish much in the postseason, no matter which area code they play in. Apparently Payton feels the same way, pulling the hapless tackle after the head coach could no longer stomach the burns and penalties by the 2010 second round draft pick.

The Saints can’t blame the crowd noise that wasn’t there, the chilly weather conditions they were insulated from in the Edward Jones Dome or the jetleg from the 90 minute flight north of New Orleans for the embarrassment they suffered before the thousands of Who Dats who made the trek upriver to take advantage of $20 game tickets.

And until I sign with the team as an offensive tackle, they can’t blame me either.

Though the Saints’ record has been muddied up, the team’s potential post-season paths are relatively clear.

If the Saints defeat the Carolina Panthers in Charlotte on Sunday, they will have won the NFC South division and secured the second seed in the playoffs, assuring the Black and Gold of hosting at least one playoff game (the divisional round).

If the Saints lose to the Panthers, there is an outside chance they could win the division by defeating the Tampa Bay Buccaneers in the season finale in the Mercedes-Benz Superdome and if the Atlanta Falcons beat Carolina in the Georgia Dome. Though both New Orleans and Carolina would finish with the same won-loss record, the Saints would possess the tie-breaker over the Panthers via the conference record.

I wouldn’t hold my breath on getting an assist from the Falcons even if they wanted to help their rival by finishing their dumpster fire season with a win.

The Saints would qualify for a wild card spot (i.e, road game) if the Saints were to beat the Buccaneers or tumble into the postseason if the Arizona Cardinals lose just one of their remaining games, at Seattle next week or at home against San Francisco.