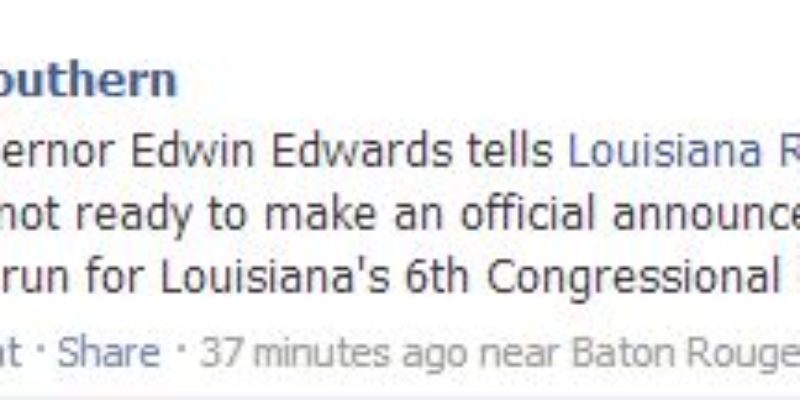 We broke the story about this six weeks ago, but we’ve been struggling to really take it seriously. Nevertheless, Edwin Edwards hasn’t made a shameless plea for attention yet this month and he was therefore overdue to have someone give him some press.

Enter Bloomberg’s Al Hunt – who used to be on Crossfire, dontcha know…

You’re wrong if you think politics couldn’t get saucier in Louisiana, where the ex-Democratic mayor of New Orleans was justconvicted for bribery and the religious-right-supporting senator who got caught with hookers is a favorite to win the governorship: Edwin Edwards, the most colorful Louisiana politician since Huey Long, is running for Congress.

“I’m just figuring out all the legalities and how to set up a super PAC, and then I’m going,” Edwards said in a telephone interview today. He is running in Louisiana’s 6th Congressional District, where the Republican incumbent, Representative Bill Cassidy, is vacating his seat to run for the U.S. Senate.

Here’s where it gets funny…

Edwards acknowledged he faces obstacles — he is 86 and spent eight years in a federal penitentiary after a conviction for racketeering.

But Edwards insisted, “I’m the only hope the Democrats have here.” Voters who wouldn’t support him because of his criminal background, he added, “wouldn’t have voted for me anyway.”

As for the age issue, Edwards said: “I hope that’s all they talk about.” There are currently 11 members of Congress who are 80 or older.

It’s funny because it’s true. The Democrats won’t get Richard Lieberman or Quentin Anderson into the runoff in the 6th District race, and nobody with any actual political chops has gotten in so far – though as we wrote six weeks ago it wouldn’t be a bad idea if somebody paid another Democrat to dilute his vote and insure he doesn’t make it past November.

As we also said, if there is any sense of decency, propriety or integrity in the Louisiana Democrat Party these days, they would immediately repudiate an Edwards candidacy. The state’s Republican establishment repudiated David Duke with vigor back in 1991 and allowed Edwards to get elected governor that year, and that was the right thing to do even though Edwards promptly returned to his usual ways of using the governor’s mansion as a base for extortion and racketeering and ultimately put himself in federal prison for eight years.

We anxiously await a response from Karen Carter Peterson, Stephen Handwerk and the gang about Edwards as their standard bearer, but we’re not optimistic about what they’ll say.

Meanwhile, the other candidates in the race are beginning to sound off. Here’s Craig McCulloch, the businessman from Baker who just got in this week…

“Edwin Edwards is part of Louisiana’s distant and dark past that was full of corruption and misplaced priorities. We’ve come a long way and shouldn’t look back now. We need fresh faces in Washington that can get to work fixing the problems that plague our nation, not career politicians.

“That’s why I’m running for Congress. The real question though is whether or not Louisiana voters want to send a convicted felon to congress or a small business owner who has history of fixing things?”

Edwards would be the 10th candidate in the race. When Garret Graves gets in, which we’re told will come soon, there will be 11 candidates in it. Welcome to the brawl.

UPDATE: Now we’ll find out who wears the pants in that family…

“I was there when he was on that call and he did not say that (he had decided to run),” said Edwards’ wife Trina. “He only said he was considering running…He had definitely said he had not decided.”

UPDATE #2: The Louisiana Radio Network’s Michelle Southern, whose initial report about the phone call with Edwards is above, filed this just now…

“Never-the-less that is not going to deter me with proceeding with the decision I’ve made,” Edwards said in a phone interview.

The seat Edwards seeks is being left open by the Republican incumbent Bill Cassidy who is running for US Senate.

Edwards, an ex-con who will be 87 in August, says he realizes his age is something voters would need to consider.

“But I hope that people would have the opportunity to view me as a man who is still able to move around fine, I don’t have any disabilities and my mind is clear,” said Edwards. “To me 80 is the new 60.”

Edwards spent eight years in federal prison after being convicted of corrupting the state’s gaming license process. His youngest son to wife Trina Scott Edwards is 6-months old, 20 pounds and Edwards says is as precious as can be.

Edwards says he is very disappointed about the lack of action currently coming out of Washington D.C.

“And I feel that now is an appropriate time for someone who has some experience in legislative matters to try to help make things work up there,” Edwards said. “One thing is certain, I can’t make it any worse.”