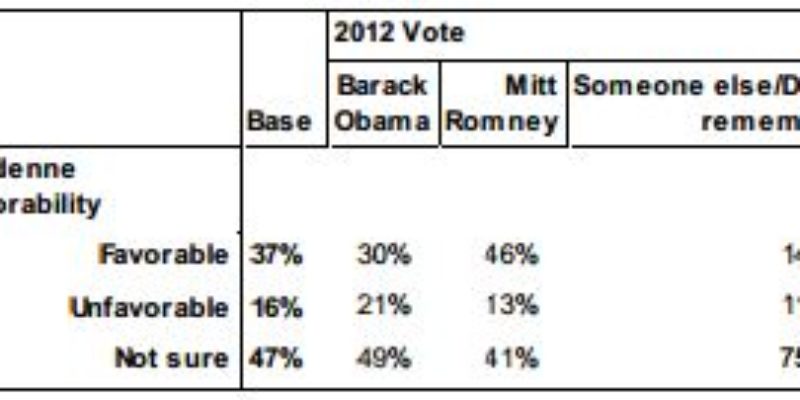 UPDATE: The Dardenne camp has gone somewhat ballistic about the PPP poll, which is understandable. They’re primarily upset about this…

The gripe here is that the error identifying him as such means that the numbers are skewed in Vitter’s direction, since he gets Democrat votes he wouldn’t otherwise get against Dardenne – or at least perhaps moves people who would vote for Dardenne into the undecided category.

As you’ll see below, we’re not completely convinced by that – it doesn’t appear too many Obama voters were fooled into saying they’re for Vitter. There aren’t many likely voters for the 2015 election who actually think Vitter is a Democrat.

Anyway, that’s the complaint from the Dardenne camp.

ORIGINAL: Our readers know we have little use for Public Policy Polling, whose surveys at the state level – and particularly in red states like Louisiana – are skewed egregiously in favor of Democrats and essentially serve as fundraising tools for desperate candidates with “D” next to their names. “Look how close we are in the latest poll! With your $25 we can win!”

We also have little use for PPP because of the idiotic questions they ask respondents in their red-state polls. They’ve done this twice in Louisiana of recent vintage; there was the poll last year in which PPP asked Republicans in the Bayou State whether George W. Bush or Barack Obama was more at fault for the problems in the Katrina response, and then there was this month’s poll question pitting Phil Robertson against Mary Landrieu for the U.S. Senate. Both of those questions are more or less designed to paint people in Louisiana, and Republicans in Louisiana more specifically, as a bunch of unenlightened rubes out looking for gays to roll or black people’s yards to burn crosses on.

But we’re going to mention PPP’s latest survey results, because they offer some data on a subject there isn’t much information about; namely, the 2015 governor’s race. That, plus the throwaway question found that Louisianans prefer Coke to Pepsi by a 59-15 margin; that spares us a further presentation as hayseeds and dupes.

In any event, PPP says Bobby Jindal is played out as a political force…

Bobby Jindal continues to be one of the most unpopular Governors in the country, with only 35% of voters approving of him to 53% who disapprove. Even among Republican primary voters in his home state only 37% want him to run for President, compared to 51%  who think he should sit it out. Mike Huckabee is the top choice of GOP primary voters in the state at 20% to 13% for Jindal, 12% for Ted Cruz, 10% for Rand Paul, 9% for Jeb Bush, 8% each for Chris Christie and Paul Ryan, 7% for Marco Rubio, and 2% for Scott Walker.

Jindal’s chief of staff Paul Rainwater abruptly quit yesterday, and there are rumors Rainwater is going back to work for Mary Landrieu to serve on her re-election team. He was her legislative director before Jindal hired him in 2008 to run the Louisiana Recovery Authority. If that were to happen, lots of folks in Louisiana would interpret that in a way not beneficial to Jindal’s approval; it would be better if the other rumors which say Rainwater is going into the private sector to make some money turn out to be true.

Jindal can’t really afford PPP’s numbers putting him at 35 percent. He’s going to need to make some hay in this legislative session to boost that score if he’s going to begin running for president, but there doesn’t appear to be a slam-dunk initiative available to him on the horizon.

And essentially, PPP says David Vitter is your next Louisiana governor.

If the candidates for Governor in 2015 were Republican Jay Dardenne and Democrat David Vitter, who would you vote for?
Jay Dardenne 29%
David Vitter 41%
Not sure 30%

Vitter is at 50 or above against the two current or potential Democrat candidates, and he’s got a 12-point lead on Dardenne.

How much ground can Dardenne make up on Vitter with the uncommitted voters? He’d need 21 percent of the 30 to get the race to even money.

The narrative we’ve all been selling is that Dardenne might be a favorite over Vitter in a runoff, because he could get Republicans who are put off by Vitter, plus centrist voters, plus Democrats to all turn out for him and that’s more than Vitter’s large base vote.

Which might still be true. But if we’re going to ascribe credibility to PPP’s numbers, and we’re doing this solely as an academic exercise here, the narrative takes a bit of a pounding.

The crosstabs on the PPP poll are based on whether respondents went for Obama, Romney or Don’t Know in 2012, which is a relatively decent proxy for Democrat, Republican or Independent. Bear in mind that the PPP sample went 53-39 for Romney, which is a bit friendlier to Democrats than the actual 58-41 number was back in 2012. But given that, here’s how well Dardenne pulls the Obama vote and here’s his growth potential.

He’s overwhelmingly liked by Republicans. The Democrats like him too, but 30-21 doesn’t exactly scream “We love this guy.” And the Independents only like him by a 14-11 count, which is strange for somebody who’s supposed to be a centrist and a technocrat.

Yes, 62 percent of the Democrats hate him. But with only 17 percent not sure, it can’t get any worse. But while Dardenne has a 46 percent approval among the Republicans, Vitter is at 77 percent. That’s an amazing number, and it indicates the number of folks on the conservative side who don’t like Vitter due to his personal baggage or whatever other reasons is a lot smaller than people think.

These are some great numbers for Vitter and perhaps disconcerting ones for Dardenne. Because while it’s true that Dardenne beats Vitter 3-1 with Democrats, Vitter beats Dardenne by about the same ratio among Republicans – and in an R-vs-R runoff, there is going to be a lot higher turnout among Republican voters than Democrats.

And the real eye-opener is the 24-14 spread Vitter has over Dardenne among the Independents and lo-fo voters.

Yes, there is a lot of growth potential for Dardenne in the 44 percent of undecided Obama voters and 62 percent undecided among the I’s. But can he get better than 70 percent of those people? That’s a tough hill to climb.

Particularly when it’s understood that this is a 53-39 Romney sample and the 2012 electorate was actually 58-41. Which means you can probably add three points to Vitter’s 41 percent and only one to Dardenne’s 29 if you’re going to adjust the sample to the electorate. Even that is generous considering that you’re asking Obama voters to care about an R-vs.-R gubernatorial runoff.

Again, it’s an academic exercise, and if you hang your hat on PPP’s numbers you’re probably wasting your time. Plus, we’re talking about a race that won’t even heat up for a year and a half. But the general direction of this would indicate Dardenne might be in for a tougher fight than even he thought if he wants to be governor.

There was a rumor circulating last week to the effect that Dardenne might be running for re-election as Lt. Governor after all rather than grabbing for the brass ring. We have nothing to offer on that other than that this poll would explain that decision should he make it.