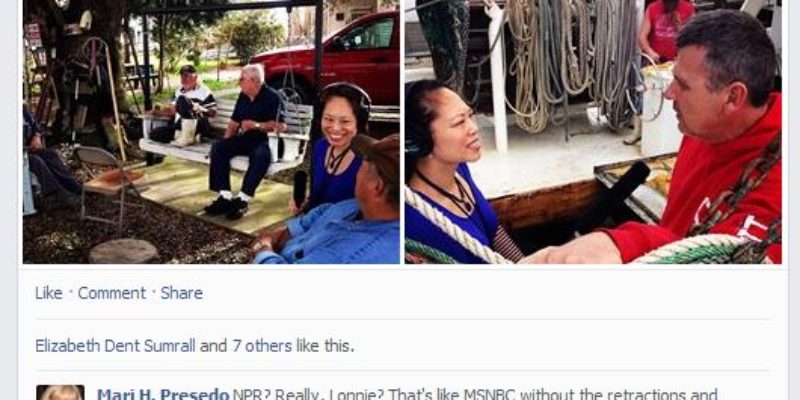 You might have seen the piece yesterday by Ailsa Chang of NPR on Mary Landrieu’s attempt to hold on to her Senate seat, but you probably haven’t seen the backstory behind it.

First, an excerpt from the beginning of Chang’s story – which is slanted exactly as you would expect an NPR story on a Democrat senator running for re-election in a conservative state to look…

There’s a sprawling, twisty live oak in Galliano, La. It’s right across the street from Bayou LaFourche in Lafourche Parish.

The Cajuns in the neighborhood call the old tree “Chene au Cowan,” and nearly every day, from sun-up to sundown, a group of retired Cajun men sit on swings beneath the branches, talking about life and politics. They say they’ve been gathering there about 50 years.

One of the men sitting under the tree one particular afternoon is Beau Broussard. He’s not Cajun, but they let him hang out here anyway. Broussard says for years, people running for political office have visited this oak tree.

Old campaign signs are still hanging all over the tree trunk. Broussard fondly remembers the last candidate who stopped by.

“He brought some white bean,” he says. “They were delicious. Ooooo! I’d vote for him just for them white bean.”

It will take a lot more than a pot of white beans to get Broussard to vote for one particular candidate this November: Democratic Sen. Mary Landrieu. The dealbreaker for him was when she voted for the Affordable Care Act.

Broussard has all kinds of problems with the law itself — that it’s wrong to force people to buy insurance, that it will make businesses hire less. But there’s something else that bothers him: The law is the signature achievement of a man Broussard never wanted to see become president.

Broussard says Landrieu votes too much in line with the president’s agenda -– he calls her “Obama Lady.” But he insists that he might still have voted for her this November if she hadn’t supported the Affordable Care Act, because he acknowledges Landrieu has helped the people of her state tremendously since she became a senator in 1997.

It gets a little better than that, but not much. Basically, Chang went down to Lafourche Parish and wrote up a piece about all the morons who either hate Landrieu because they also hate Obama, or who’ll vote for her because she helps the oil industry trash the environment.

Or something. If I said “NPR is going to do a story on Landrieu’s re-election chances in Louisiana,” you could probably speculate on what that story would look like and come pretty close to what Chang delivered.

Naturally, there’s a backstory which might even be more interesting than the piece itself (not that we’re talking about a very high bar to clear). Namely, that the guy who drove Chang around and introduced her to the people she portrayed as mouth-breathing rubes in her piece is furious about it…

I am filled with disappointment over the way in which we as Louisianans were portrayed in a story covered by NPR’s Ailsa Chang, however I will not be regretful of this circumstance.

My intentions were genuine; I wanted Ailsa to get a raw, unfiltered story about Mary Landrieu’s electability in Lafourche Parish and I guess that’s what she got. We talked to dozens of folks in south Lafourche, all of whom had different ideologies, and it is unfortunate that out of over six hours of material gathered she chose to headline the story with the single most race-driven, uninformed statement that was gathered that day.

To clarify our relationship, Ailsa Chang called me a week before traveling down to LA because she was told by several people in leadership positions that I could take her to parts of Lafourche Parish that she otherwise would not be aware to venture to; I did not know Ailsa before she called me. Therefore, I believe it is unfortunate that media in this circumstance, as in many circumstances, has twisted the information in a way that does not equate to the love shown by the pure-hearted people I have always known.

That’s from Lonnie Granier, a recent LSU graduate who’s done some work for Republican candidates in Baton Rouge and Lafourche Parish and who’s grooming himself to get into the political game at some point in the future. 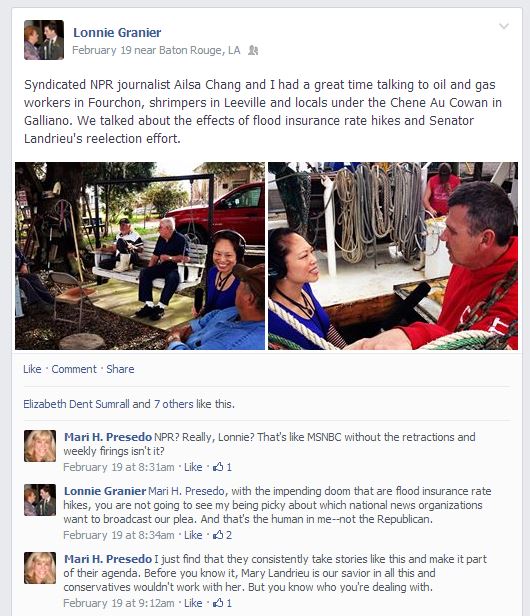 And this was Granier on Facebook a little later that day… 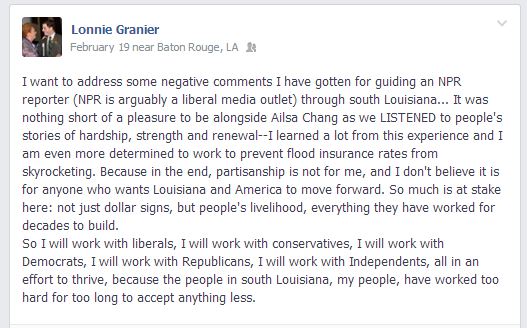 Well, you live and learn.

Is it a big surprise that a reporter from NPR wouldn’t care about flood insurance and whether it’s a big deal in Lafourche Parish? Not really. People from Lafourche are understandably desperate to make the rest of the country understand what having flood insurance rates go through the roof will do to them, but nobody in Washington cares about that.

I had a similar learning moment back in 2010 when I was invited to Washington on an advocacy trip an energy-industry group had put together in order to get some attention for ending the Obama administration’s drilling moratorium. And I was absolutely shocked at the indifference and ignorance shown on the issue even by conservatives on Capitol Hill and in the conservative media and think tank circuit. It was eye-opening to see people who generally speaking are pretty good on most issues shrug their shoulders over the question of oil and gas and how the state’s economy was taking a beating from that moratorium.

And oil and gas actually matters to people in DC, regardless of how much they actually appreciate that fact up there. Flood insurance? Nobody cares.

Besides, flood insurance is something that cuts across party lines and isn’t really explainable within the left-right construct. You can’t fit flood insurance into a political narrative, so a reporter from NPR isn’t going to do anything on the issue. She might have told Lonnie that “oh, yes, that’s a big part of my story,” but she’s never going to see him again so who cares if she lies to him?

What does fit into a political narrative? Toothless coonasses who refuse to vote for black people and who oppose Mary Landrieu. Oh, and if that’s who doesn’t like Obamacare, it’s like hitting an exacta at the track. Welcome to Ailsa Chang’s lede.

Should Lonnie have seen that coming? Maybe not. He’s young yet. He’ll see it from now on.

There’s nothing like a little personal experience to let you see the world more clearly.