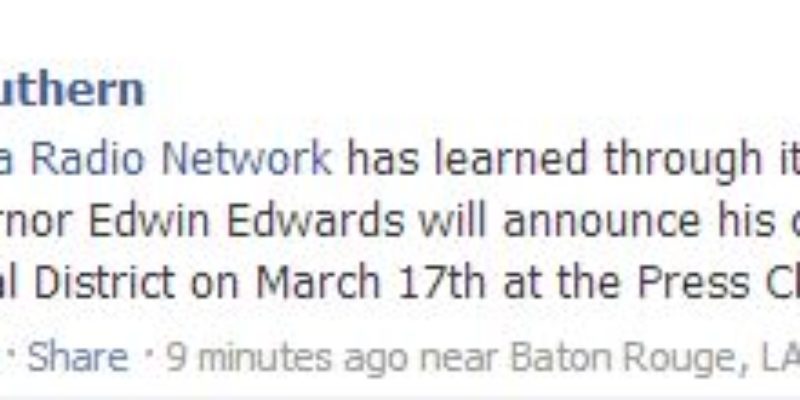 A report coming across the social-media wires this afternoon…

Hardly a surprise, as we’ve been batting the prospect of Edwards running for Congress around for two months.

This is what you get when the Louisiana Democrat Party completely runs out of gas and can no longer recruit competitive candidates for major races in the state. Edwards running is a disaster for that party, though nobody in its leadership seems to recognize that fact.

Yesterday I was interviewed by a writer who’s working on a book about congressional elections and wanted to pick my brain on the 6th District race. I mentioned Edwards as a potential candidate and before the conversation could go much further he blurted out, almost without really thinking, “He’s just a distraction. Nobody will vote for him.”

I explained that without another Democrat candidate in the race and such a jam-packed field it’s not at all unreasonable that Edwards could make the runoff simply off his name recognition and the D next to his name. I said I didn’t believe, and I definitely don’t, that he has much of a chance to win the race, but if there are a dozen candidates running it’s probably enough to make the runoff if you can reel in 20 percent or so, and Edwards is quite likely to pull that number if the Louisiana Democrat Party doesn’t recruit someone else to carry its standard.

The responsible thing would be for the Democrats to find such a candidate and/or repudiate Edwards. Having an 86-year old felon convicted of public corruption and a failed reality TV star as the face of your effort to recapture Republican congressional seats is a fairly recognizable badge of shame.

Meanwhile, if Edwards follows through on this candidacy the multitude of Republicans will be competing for the title of Best Purveyor Of Ridicule Upon The Crook’s Head, and that will be entertaining. And as he files his campaign finance reports that information will be public for all to see – and we pledge to insure that our readers see it.