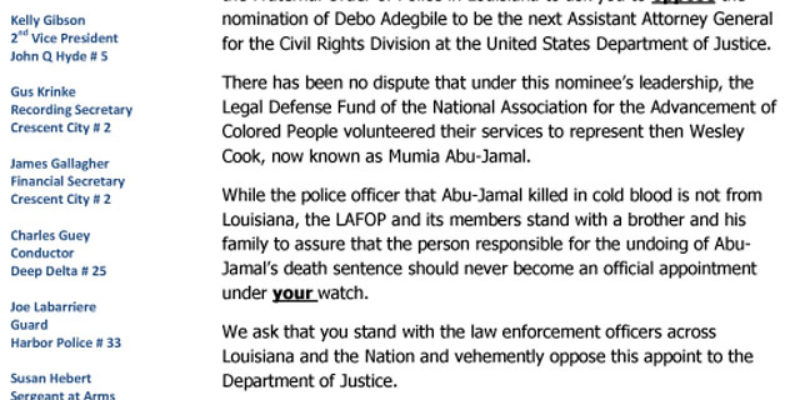 In the aftermath of the Senate’s defeating the nomination of Debo Adegbile to head the Department of Justice’s Civil Rights Division, some interesting reactions.

First, the outrage from the White House…

The Senate’s failure to confirm Debo Adegbile to lead the Civil Rights Division at the Department of Justice is a travesty based on wildly unfair character attacks against a good and qualified public servant.  Mr. Adegbile’s qualifications are impeccable.  He represents the best of the legal profession, with wide-ranging experience, and the deep respect of those with whom he has worked.  His unwavering dedication to protecting every American’s civil and Constitutional rights under the law – including voting rights – could not be more important right now.  And Mr. Adegbile’s personal story – rising from adversity to become someone who President Bush’s Solicitor General referred to as one of the nation’s most capable litigators – is a story that proves what America has been and can be for people who work hard and play by the rules.  As a lawyer, Mr. Adegbile has played by the rules.  And now, Washington politics have used the rules against him.  The fact that his nomination was defeated solely based on his legal representation of a defendant runs contrary to a fundamental principle of our system of justice – and those who voted against his nomination denied the American people an outstanding public servant.

The Obama administration has to be especially furious given that they had their man in the Senate Harry Reid destroy the filibuster for presidential appointments specifically for the purpose of nominating radicals like Adegbile, who became famous for his over-the-top attempts to free cop killer Mumia Abu Jamal as president of the NAACP Legal Defense Fund.

But reaction more local to here in Louisiana was of a different character. Rep. Bill Cassidy, who’s running for the Senate against one of the 47 votes in favor of Adegbile’s nomination (that would be Mary Landrieu)…

“We know Senator Landrieu votes with President Obama 97 percent of the time. We didn’t know that even applies when it means voting for a nominee who supported a convicted and unrepentant cop-killer. Even Senator Harry Reid voted against this radical nominee. Our law enforcement officers put their lives on the line everyday to protect us; we need to stand up for them.”

There’s a bit of gamesmanship at work in Cassidy’s statement, of course, because Reid’s vote against Adegbile’s nomination was procedural in nature – by voting against Adegbile Reid reserves the right to bring his nomination back up for another vote in the future.

But you use what you have. And if you can paint Landrieu as further to the left of Reid, which with respect to the Adegbile vote you can do, then few will fault you as a politician for taking that shot.

For an even more red-hot reaction, we bring you another Landrieu opponent in the upcoming Louisiana Senate race, Rob Maness…

“The only thing more shocking than the president’s nomination of Mr. Adegbile is the support he received from 47 senators, including Sen. Landrieu,” Maness said.  “Working with the NAACP’s Legal Defense Fund, Mr. Adegbile was instrumental in having Mr. Abu-Jamal’s death sentence commuted.  How can anyone who labored for such leniency be a part of anything our nation calls ‘justice’?”

“Those who stand on the front lines of civil defense each and every day deserve our utmost respect, and those who dare injure them or take their lives deserve nothing but scorn, prison, and the death penalty,” Maness said.  “Anyone who thinks – and votes – otherwise is unfit for public office.”

The Louisiana Fraternal Order of Police wasn’t all that happy about Landrieu’s vote, either…

During this crucial vote Senator Mary Landrieu, who is shortly coming up for reelection, voted in favor of the confirmation of Adegbile, while Senator Vitter voted in opposition.

The LAFOP sent a letter to Senator Landrieu asking her to vote NO and oppose this appointee.  Undoubtedly she would rather be a party person than listen to police officers that she “represents” across the State of Louisiana.

Thirty years ago, Philadelphia Police Officer Daniel Faulkner was violently murdered by Mumia Abu-Jamal, a member of a racist group that advocated violence against police.  A jury convicted him and sentenced him to death for the brutal crime.

As you know Adegbile was instrumental in having convicted cop killer, Mumia Abu-Jamal, sentence of death commuted to a prison term.  Mr. Adegbile previously led the Legal Defense Fund at the NAACP.  In that position, Mr. Adegbile chose to throw the weight and resources of his organization behind Abu-Jamal. 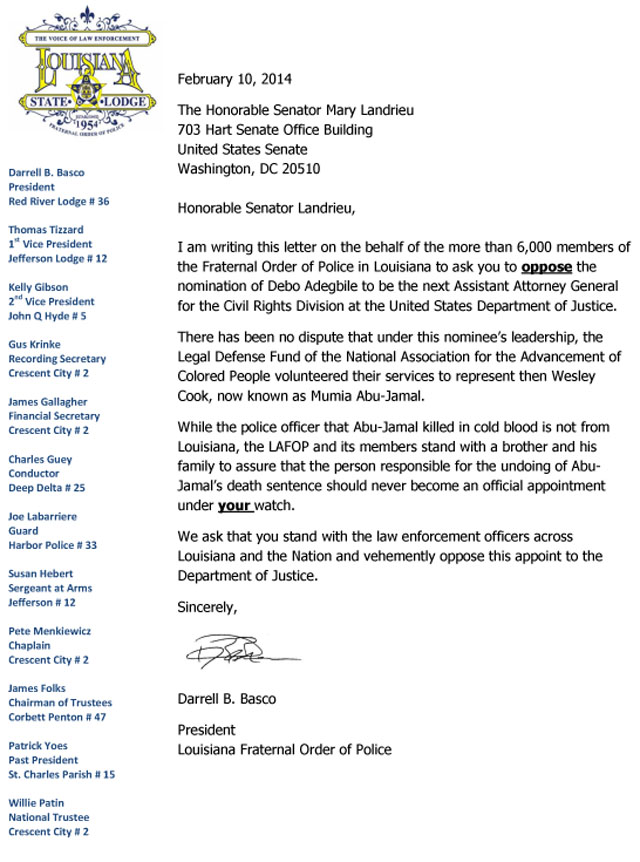 We asked the Louisiana Sheriff’s Association, which endorsed Landrieu in 2008, for comment on her Adegbile vote. If we get something we’ll pass it along.

Interested in more national news? We've got you covered! See More National News
Previous Article The Senate Killed The Adegbile Nomination, No Thanks To Mary
Next Article Y’all Do Know Mary Landrieu Has Taken Big Cash From The Kochs, Right?