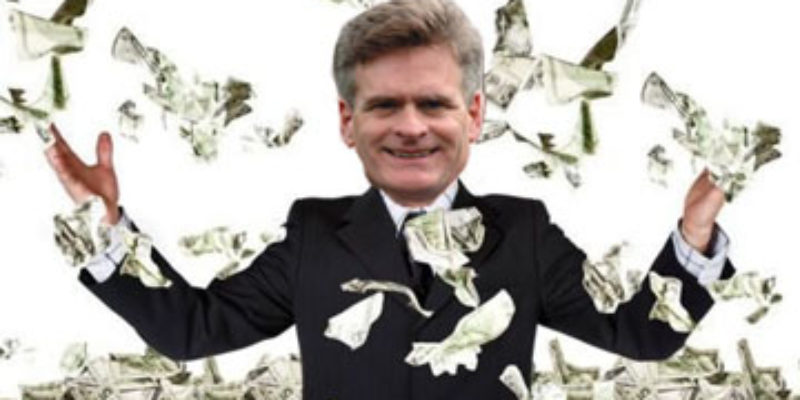 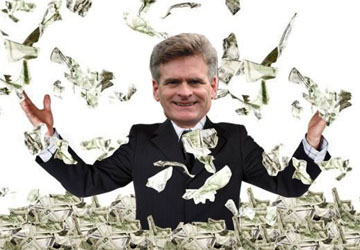 The Bill Cassidy camp has been saying for a couple of weeks that its 1st quarter campaign disclosures would show significant momentum in the candidate’s favor, and while they may or may not end up closing the gap against Mary Landrieu in advance of this fall’s U.S. Senate race their 1st quarter numbers would definitely show their ability to go toe-to-toe with her money-wise as the campaign heats up.

And as it turns out, they weren’t lying. Cassidy’s figure is his best one yet…

U.S. Rep. Bill Cassidy, M.D.’s U.S. Senate Campaign today posted its best fundraising quarter to date, reporting it raised more than $1.2 million in the first quarter of 2014.  He currently has more than $5 million cash on hand.

Dr. Cassidy has received strong support from Louisiana residents during his campaign.  He is proud to have received contributions from more than 6,000 individual Louisiana donors.  He released the following statement:

“We have received incredible support from people throughout Louisiana.  This support reflects a strong desire to change the direction in Washington.  Louisiana wants a Senator that stands for job creation, domestic energy development and repealing Obamacare and replacing it with patient-centered solutions.  Louisiana wants a Senator that believes in the abilities of its citizens – not a rubber stamp for the President and the expanding bureaucracy and regulations that are interfering with job growth and intimate aspects of their lives.” – Congressman Bill Cassidy, M.D.

For historical comparison, Cassidy raised more than incumbent David Vitter’s campaign in the first quarter of 2010.  In 2010, the incumbent Vitter raised approximately $1.1 million and reported $5 million cash on hand.  Dr. Cassidy has raised more money to date than 2008 Republican challenger State Treasurer John Kennedy did during his entire campaign.

There is no doubt that $5 million in cash on hand is a good number, particularly for a Louisiana race and particularly when there will be so much 3rd-party money in the race (Americans For Prosperity has already spent some $3 million or thereabouts, for example.

It shouldn’t be a major surprise if Landrieu’s first-quarter numbers look better than Cassidy’s when she releases them. After all, she’s the incumbent. She has access to more money than he does. And she’s going to need more money than he will – she’s got name recognition from virtually everybody in the electorate and she’s still at 40 or below in the polls, which presents a colossal messaging challenge.

But what we do know is this will be the most expensive race in Louisiana history, and Landrieu won’t be able to outspend her opponent two- or three-to-one like she’s been able to do in the past.

UPDATE: Landrieu is reporting a 1st quarter figure of $1.8 million and $7.5 million in cash on hand, which is a good quarter for her. But a $7.5 million-to-$5 million advantage is a stark difference from previous campaigns. To wit, via OpenSecrets.org, here’s the raised-and-spent figure for the entire 2008 campaign… 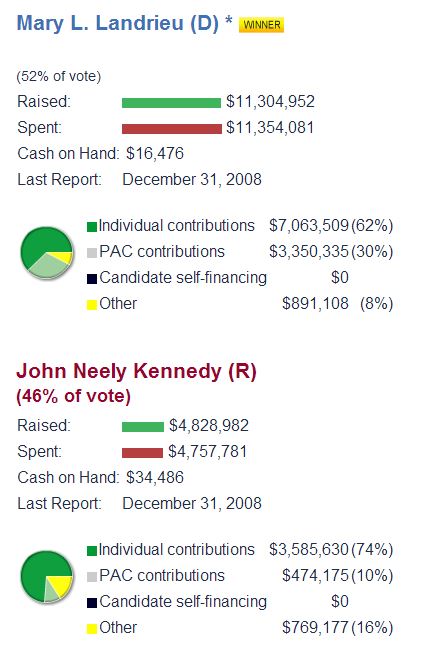 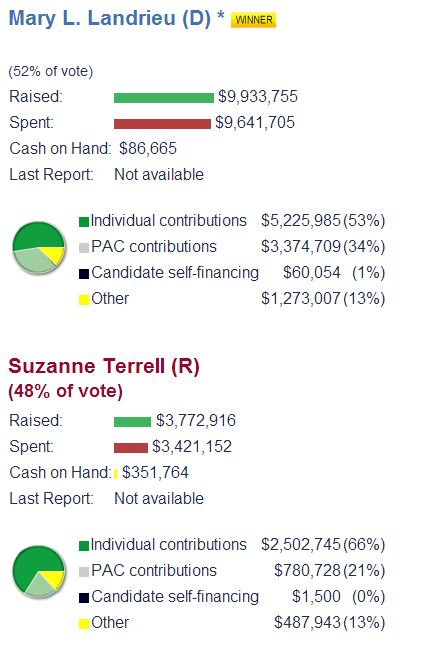