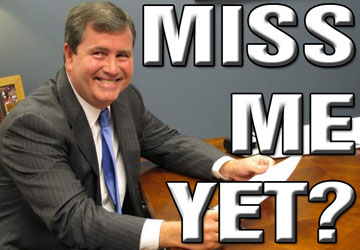 Like a Christmas bonfire on a levee, Rep. Vance McAllister’s political career burned quickly and then flamed out, fortune not favoring the foolish and setting up for a successor more like a tortoise than a hare.

Yesterday, McAllister announced he would not run for reelection to an office he won less than half a year ago being a political unknown nine months ago, undone by as about an unforced error as can be imaginable. Common sense tells you that you keep your tongue in your mouth even if beguiled by a staffer married to one of your best friends, which he almost inexplicably ignored.

But, in a sense, it all came too easily to McAllister for him not to apply caution. Everything fell in place for him to win to make him seem to himself invulnerable – a desultory field save one Republican, that Republican not entirely fairly said part of a cabal to grease the skids for his own election that served to discourage support for him, a fortuitous network of friendships useful to maximize McAllister’s chances in a low-turnout electoral environment, and a canny ability to position himself as both anti-politician to appeal to conservatives and as anti-partisan to appeal to liberals.

His very inexperience did him in, for a veteran politician would have realized he had caught lightning in a bottle and that he needed to build a solid base around the fortuitous strewing of foundational stones that could have kept him in office as long as he liked. And would not have risked it all with behavior that, when discovered, invalidated the narrative that he was Jonah sent to Nineveh at least to provide a counterpoint to the wickedness of Washington, if not to preach for its inhabitants to repent from their free-spending, partisan-bickering, insulated ways.

In the final analysis, a natural politician in communicative skills to voters, he undid it all because the lark that provided an ego boost which turned into a victory meant he had to act as more than a candidate finding affection from voters into channeling that towards serious purpose in office, not in living la vida loca. He apparently desperately lacked someone, anyone, whispering “sic transit gloria mundi” in his ear. And he has concluded that his campaign narrative of the unsoiled going off to clean up Washington after this simply cannot be reconstructed well enough to win, in addition to whatever personal and family issues now begging for his attention.

Interestingly, this dénouement cancels the ability of anybody to repeat his playbook for the near future. Instead, a once-bitten, twice-shy electorate will gravitate towards people with records of stability in office. That another major effort must be launched so soon also favors someone who can get resources quickly and a lot of them and in a value-laden way.

That does not mean the likes of previous candidates Public Service Commissioner Clyde Holloway, state Rep. Jay Morris, or state Rep.Robert Johnson. They mainly self-financed without a lot of outside support, and Johnson, as is any white Democrat who runs, also is penalized in that state Democrats will wish a viable black Democrat to run in order to follow the juicing strategy to have warm bodies to show up to vote to reelect Sen. Mary Landrieu. While a white Democrat would be more likely than a black Democrat to win the seat, he still would not be favored and the latter would be more able to drive voters into the general election where Landrieu must win outright or she’s history in a runoff.

Democrats will see that as the better value play, and suggests that they will wish to coalesce around a black candidate not already wanting to stay in an office where the election occurs simultaneously. Monroe Mayor Jamie Mayo making a repeat run becomes the obvious choice, as he does not face reelection until 2016, but it’s possible a state legislator such as another former candidate state Rep. Marcus Hunteror maybe someone like state Rep. Katrina Jackson could take one for the team.

Yet the clear favorite going in would be the guy McAllister vanquished in the special election runoff, state Sen. Neil Riser, who started as the favorite last year. Even after plunking down $1 million in a losing effort, he has personal wealth that can help (which he didn’t even touch last year), he gained considerable assistance from donors (who gave him that $1 million in a few months), and with that he already built a good base from which to start, having pulled 40 percent of the vote in his losing effort. And if he was damaged by accusations of a (as some of his opponents liked to term it) “rigged” election, that charge has lost a lot of its power, for this will be no snap election and he had no ability to influence its timing.

And so this sordid situation will stumble to a close, with the only people associated with the district really happy about it being whoever wins the seat this fall, the area’s Democrat Public Service CommissionerFoster Campbell (because had McAllister run again, it would have been difficult to find a viable black candidate to run, so in order to pursue the Landrieu juicing strategy area Democrats may have turned to outgoing Shreveport Mayor Cedric Glover to run against Campbell as the district spans the entire northern part of the state), and political consultants doing business there with bigger paydays coming their way with a competitive contest. Meanwhile, there goes on much shaking of heads over how McAllister threw it all away so quickly.