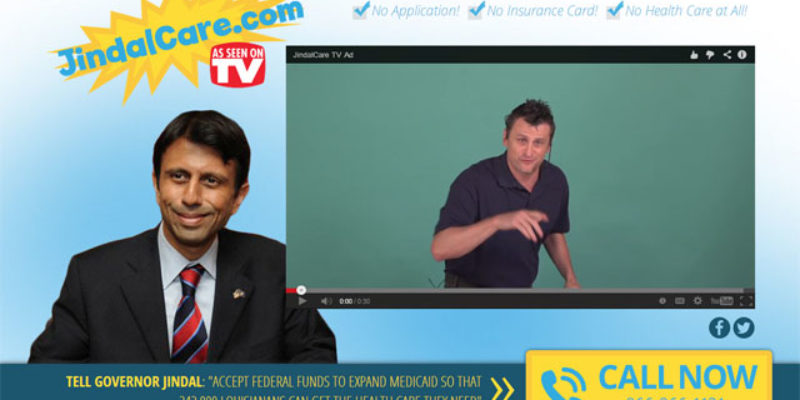 Last week, Louisiana Gov. Bobby Jindal put out a 26-page proposal to repeal and replace Obamacare with a more patient-centered, market-oriented set of reforms. The plan Jindal circulated through his new policy think-tank America Next is a good one, though much of it is an amalgamation of Republican policy ideas that should have been implemented a long time ago.

This post isn’t about the Jindal plan, though we will have a review of it later this week (probably for the American Spectator). Because unfortunately, the governor allowed the Left to steal the narrative from him by leaving his online door wide open.

How do you release a major health-care proposal and not insure you own the domain name for Jindalcare.com?

The failure to do that leads to an easy win for your political enemies. In this case, the Soros-funded thugs at MoveOn.org, who are actively advertising a site which looks like this… 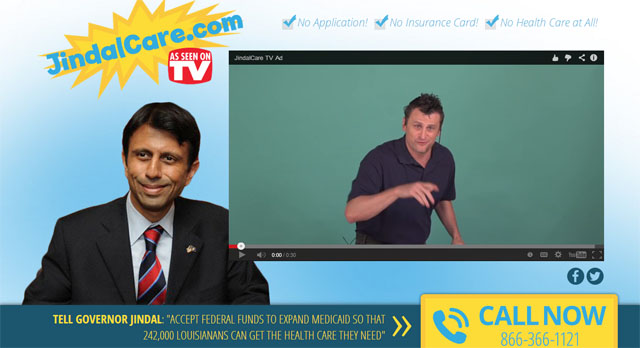 And the TV commercial is cringe-inducing, though the Vince Offer-style greaseball pitchman is funny…

The Left hasn’t shut up about Jindal’s refusal to expand Medicaid since he issued that refusal, and if he’s going to run for president he an his people had to know they were going to try to smear him with it.

And even though Jindal is entirely right about the Medicaid expansion, the case against it involves facts, analysis and explanation – whereas the case for it is very simple: the government’s got free money and you oughta get you some. That means you’ve got to make it as difficult as possible for your enemies to press that case against you.

It means that before you go national with attention-grabbing health-care proposals, you need to go to GoDaddy and snap up every domain name somebody could use to satirize or ridicule you which is easily searchable.

YouTube says only about a couple of thousand people have seen the cheesy Jindalcare ad. As for how many people have been to MoveOn’s microsite, who knows? The point is that more people are going to end up seeing MoveOn’s ridicule of Jindal than will have seen his actual health-care plan.

That’s a tragic outcome for Jindal, and it was totally preventable.

You can’t have unforced errors like this. Not if you’re going to be a serious presidential contender. It’s not as serious as what Rick Santorum allowed to happen to him online, but it’s still pretty poor performance – and in the 21st century, and if you’re going to name your organization “America Next,” it’s the type of thing that will kill you.

Interested in more national news? We've got you covered! See More National News
Previous Article See How Far You Can Get Into This Before You Lose Your Ever-Lovin’
Next Article Here’s Some Evidence That Weed And Politics Don’t Mix