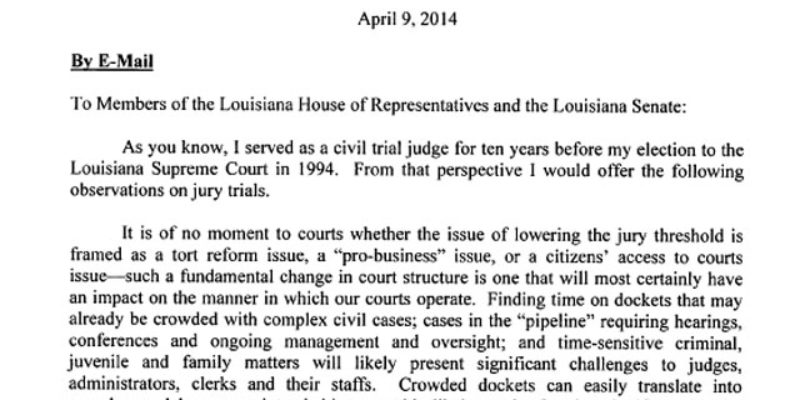 They just had a vote on the floor of the House of Representatives at that big phallus close by the Exxon refinery about how much cash has to be in the pot before they let you have a jury for the case where you get sued. That’s called a “jury trial threshold,” in case you wanna connect the dots, and it’s a big thing. The LABI people made it a big priority, as y’all who read this site mighta seen by all the banner ads here at the Hayride.

The way this works is that everybody else – or pretty close to everybody else, considerin’ we’re talkin’ about 36 other states – around the country thinks it’s a constitutional thing that if you get sued or accused of a crime you have the right to a jury trial. Bein’ judged by your peers, and all. Except that ain’t how we work it here in the Lawyer’s Paradise. Here, if you get sued an’ they’re not tryin’ to get more than fitty grand outta your hide you gotta go in front of a judge.

And the LABI people, plus most of the rest of the business groups who are screamin’ about how the bloodsuckin’ lawyers are killin’ ’em, had a bill on the floor of the House today that woulda wiped out that 50K number. It woulda made it so Louisiana was like most of the other states around the country without a figure where your right would kick in; you’d just automatically be able to say whether you want a jury or not. The fallback was that they’d have amendments that would at least lower the number from 50K, because nobody else in the country is close to that. In Maryland, who comes in second, the threshold is $15,000.

The bill was HB 917, and Rep. Ray Garofalo (R-Chalmette) was the guy carryin’ it. Garofalo was even here on the Hayride last week with an op-ed makin’ the case for why his bill was good stuff.

An’ part of his case is that we have this 50K figure because in 1993 the trial lawyers got it passed, and that ol’ crook governor we used to have who ended up in jail and is now runnin’ for Congress signed it. The 50K is there because the lawyers all wanted it.

Now, only one case outta 50 or so in this state goes to a jury. Everything else is in front of a judge. Which means either you get a good judge, or you settle your case for whatever the plaintiff lawyer says he’ll take to make the case go away – because if you draw a Janice Clark or Wilson Fields or some other Pez dispenser in a black robe you’re gonna get roasted on a spit if you go to trial.

And because we have so many Pez dispensers in black robes at courthouses all around the state, we also got lots of B. Joseph Schmuckeaux, Attorney At Law-type people hangin’ up a shingle, buyin’ the back page of the phone book an’ takin’ on lotsa lousy cases whereby Miz Gladiola done slipped-and-fall inside the Big Lots. And B. Joseph Schmuckeaux, Attorney At Law, will take Miz Gladiola’s case an’ hope he can draw one o’ them Pez dispenser judges, because if he does he knows that Big Lots’ insurance company will pay him easy settlement money to make him go away.

If there was a jury, Big Lots might just fight the case – because with a jury you never know, plus the jury might not like that video Big Lots’ insurance company can find of Miz Gladiola twerkin’ at the Miley Cyrus concert, bad back an’ all, an’ come back with a big ol’ goose egg for an award. B. Joseph Schmuckeaux can’t keep his shingle up with too many of those goose eggs, so what he does nowadays is he’ll price his damages at $49,999 rather than 50K so there’s no jury. An’ maybe he gets a nice, easy settlement from Big Lots.

Dumpin’ that jury trial threshold means a whole lotta B. Joseph Schmuckeauxs will have to go get real jobs. And when they do, what’s left of the attorneys might have to be a lil’ more judicious about takin’ Miz Gladiola’s case that regular people would say ain’t worth a whole lot an’ prolly shouldn’t be cloggin’ up the courts anyhow.

So we got a state fulla track stars in Hart, Schaffner & Marx suits runnin’ after ambulances, and when the LABI people wanna do somethin’ about it they whine. But it’s not really even the track stars who did most of the whinin’. Check out what Bernette Johnson, who’s the Chief Justice of the state Supreme Court, sent to the legislature last week… 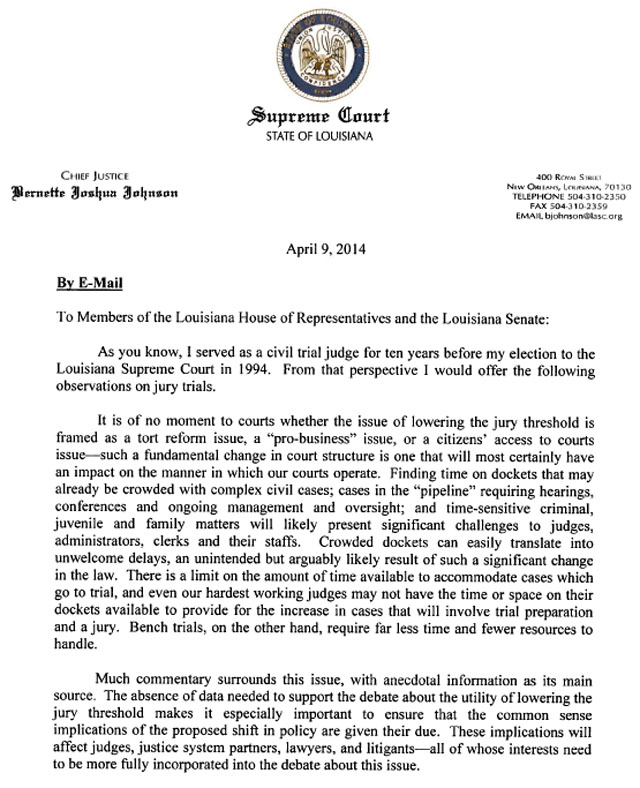 So it’s the judges whinin’ about the caseload they’d have to carry if this thing passed.

Here’s the deal. You can go look at the numbers compared with all the other states and what you’re gonna find is that Louisiana has way more judges per capita than other places do, that those judges handle a lot fewer cases on average than they do in other states and that they get paid big coin for what they’re asked to do.

My aunt Clothilde works at one o’ them courthouses an’ she can tell you the judges are the resident experts on daytime TV. She can also tell you they know all the best places to go for Happy Hour aroun’ town, an’ when they show up at the country club at 3:30 instead of 3:00, all the hospitals have already been called an’ even a few morgues.

And prolly some of those track stars in suits.

Which is what you can expect is gonna continue, because even the LABI people makin’ a priority of that bill couldn’t make a difference. They didn’t have the votes on the House floor to carry Garofalo’s bill, so the fallback was that they were gonna drop the threshold down to 10 grand over a period of a few years. But while they were tryin’ to round up the votes to do that, Robert Johnson, who’s a Democrat track star in a suit outta Avoyelles Parish somewhere (he ran for Congress last year and got beat, and he wants to run again), ran up to the mike and made a motion to table the bill and got the votes.

The Chasers Of Ambulances just beat the LABI people, in a Republican-majority legislature.

An’ the Pez Dispensers in black robes just raised their Old Fashioneds in salute.

You can remember that next year when your car insurance is more than your grocery bill.