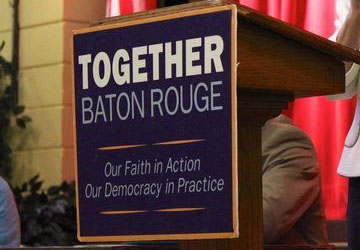 Earlier today we passed along an e-mail from Mary Kay Henry, the president of the Service Employees International Union, which hit the e-mail box of a contact of ours who is acting as something of a mole within Together Baton Rouge.

That organization’s grand poo-bah Brod Bagert called us liars for forwarding and publishing the fact that our contact is getting SEIU emails as a member of TBR’s mailing list.

Except our contact informs us that the e-mail address he gave to Together Baton Rouge was an address solely given to that organization, and that there would have been no other way for SEIU to have gotten hold of that e-mail address unless TBR gave it to them.

And just to prove that it wasn’t a fluke, he passed along another recent e-mail. This one’s a lot of fun…

We all do it, and we all have certain expectations about it. We expect to be paid. We expect to receive fair treatment. We expect that if we work hard, we’ll have access to greater opportunities and better jobs.

Today, May Day, is a day to honor workers. Thousands of people are coming together to assert that we don’t believe in a “subclass” of workers. We believe that hard working immigrants deserve protection from unscrupulous employers and should not be paid less than minimum wage.

But if we’re not careful, conservative forces could succeed in creating a subclass of workers who are paid and treated differently than the rest of us. How? They want to strike down crucial citizenship provisions in the immigration reform bill that’s currently being debated.

Call Congress today and tell them that you support immigration reform. Tell them you support equal protection and reject second-class status for workers.

Immigration reform supporters are taking to the streets in over 70 events across the country today to remind the Senate that aspiring Americans deserve a path to citizenship. The bill that has been introduced is an encouraging first step, but it is important that the pathway isn’t too long, the fines aren’t too high, and barriers aren’t too steep.

As the Senate debates the content of the bill, it is vital that we let them know we stand behind workers and their families. A pathway to citizenship is a guarantee that everyone will be afforded the same protections and that unscrupulous employers will not be allowed to exploit loopholes to drive down wages.

Do your part and call Congress. Tell your Senator that you stand with your fellow workers and support a clear path to citizenship, with equal protection for all.

Interested in more news from Louisiana? We've got you covered! See More Louisiana News
Previous Article Common Core Will Not Be Repealed Across State
Next Article Now You Can Watch One Man’s Political Self-Immolation On Video