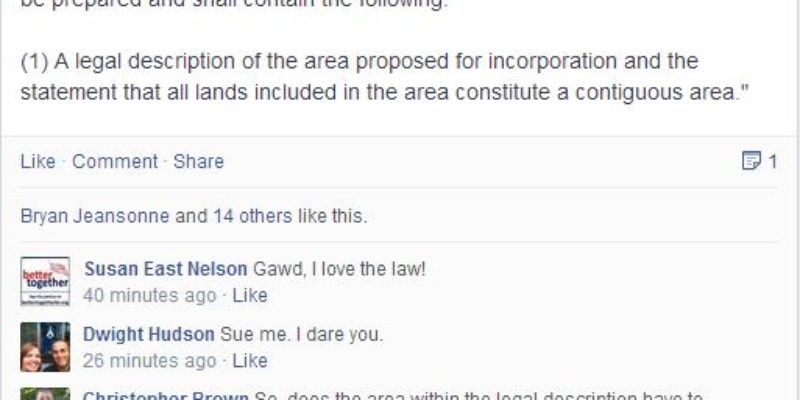 It’s interesting that three of them – Wilson, Boe’ and Welch – did so. At the Metro Council meeting, it was quite clear that this vote was not limited to the annexation.

Mayor-president Kip Holden’s chief of staff William Daniel mumbled something about not interfering with the St. George petition by annexing the mall, though it’s been widely discussed that there is a question whether changing the borders of an area in an incorporation petition while that petition has not been certified invalidates the petition.

Holden spoke in favor of the annexation without saying a word about it. He instead offered platitudes about how he’s a uniter, not a divider and how “all of Baton Rouge is booming,” due to his efforts in office. The speech was clearly not intended to say “Hey guys, nobody’s trying to invalidate the St. George petition here; the Mall wants to be annexed so we’re annexing the Mall and that’s all.”

He gave that speech, and the Council voted in favor of the annexation.

Welch, for his part, said he doesn’t think the annexation invalidates the St. George petition, which if it did would mean the St. George organizers would have to start over after having gotten some 15,000 or more signatures toward their goal of 17,000-18,000 to put the incorporation on the ballot. Taken at his word, however, he seems gullible to a fault – if he wasn’t in favor of killing the St. George incorporation, then he could have voted for Councilman Buddy Amoroso’s motion to defer the vote for 30 days to procure an Attorney General’s opinion on the invalidation question, which could come in any day, or for the St. George organizers to finish collecting signatures and turn in the petition for validation.

Welch supposedly wants to run for judge. A vote to place the larger question of St. George in a legal mess when the option existed to wait until a clearer legal picture emerged doesn’t exactly lend confidence in his independence or judicial savvy.

So now we’ll wait for the inevitable filing of a lawsuit to invalidate the petition, which will happen as soon as the St. George organizers turn one in. We got two specific indications of that – first, when several speakers in support of the annexation and one or two of the Metro Council members made the point that there isn’t currently a time limit on the St. George petition (despite the fact there’s a bill in the legislature they’re all aware of which would put just such a limit on them). And second, Delgado’s Facebook had this gem after the vote… 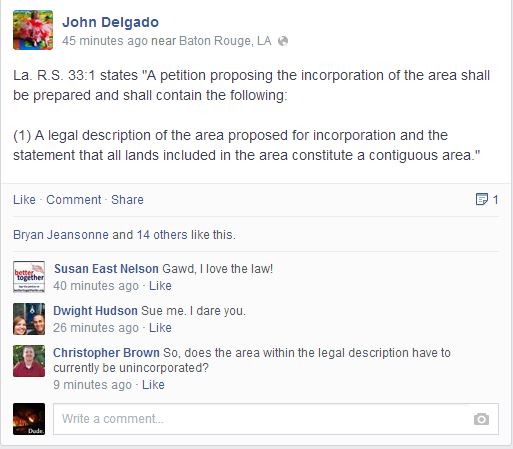 It seems obvious that Delgado is saying he’ll be the one suing to invalidate the petition. He’s repeatedly threatened to sue to stop St. George, when he wasn’t busy hurling slurs and epithets at the St. George organizers and supporters.

As for those organizers, this was their statement after the vote…

After numerous conversations with multiple attorneys over the last week, we DO NOT believe that tonight’s annexation vote will invalidate our petition. We are continuing to move forward and will gather the remaining signatures to bring this to a vote.

This annexation should take the argument that St. George will bankrupt the City of Baton Rouge off the table.

This will not negatively impact the St. George budget – we have anticipated this and will make adjustments for that loss in revenue.

We are concerned about the St. George Fire Protection District. If the City Parish Government doesn’t do the right thing by them, we will.

We hope that the City of Baton Rouge and opponents of this movement will stop trying to interfere with the democratic process. We WILL turn in the required amount of signatures and will gladly fight anyone in court who would choose to block our legal, democratic right to bring this issue to a vote.

Perhaps it’s true, and the fact that no actual voters are moving from St. George to Baton Rouge under the annexation of the territory at hand would mitigate in favor of the position that the incorporation petition should remain valid after today’s vote.

But Amoroso, who along with Ryan Heck and Chandler Loupe voted against the annexation, made that motion to defer the annexation for 30 days. Doing so would have made it much less likely that a legal case would have resulted over this issue. And the Metro Council had the ability to make room for the resolution of that issue.

That wasn’t done, and now all we’re left with are questions. Questions like…

1. Was it the specific intent of Holden and Delgado and their allies to invalidate the St. George petition through an underhanded, backdoor maneuver?

2. What was offered to Welch, Boe’ and Wilson for their acquiescence on the annexation vote? What threats were made?

3. Will the newly-annexed areas be liable to pay the CATS tax when they were not part of the artfully-drawn taxing district passed in 2012? This is an item of some controversy – Daniel stated they are, but what was on the ballot simply included the incorporated areas of Baton Rouge and no one seems to know for sure whether newly-annexed areas fall within that description.

4. If the answer to (3) is yes, were any special arrangements made away from the public eye to gain the agreement of the annexed landowners? If so, what arrangements were there?

5. What effect on the St. George Fire Department would the Mall annexation have? The administration said the effect is only $340,000 per year, but whether that’s a credible figure is hotly debated; St. George Fire says it’s going to be a far larger impact.

Perhaps time will assuage those concerns. Either way, the future of East Baton Rouge Parish has never been more up in the air than it is tonight.