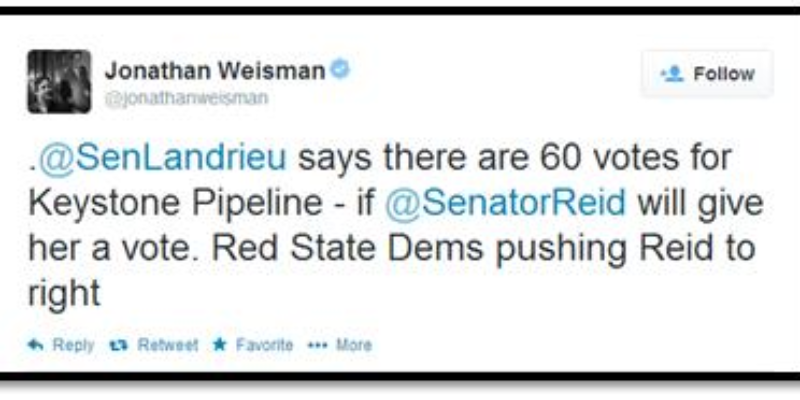 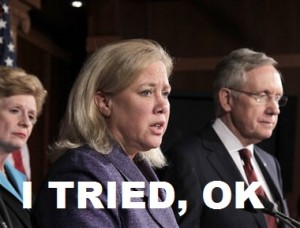 After Senate Majority Leader Harry Reid and Senate Democrats used a parliamentary move today to block a Republican amendment on the Keystone XL pipeline which would have eliminated President Obama’s approval of the pipeline, Sen. Mary Landrieu said that she tried to deliver, but ultimately could not.

But, “I said I would try” is not exactly what Landrieu originally said. Landrieu declared yesterday that she had successfully used her Senate Energy and Natural Resources Chairwomanship to whip enough Senate Democrats to vote for the Keystone Pipeline.

As Energy Chairwoman, Landrieu was somewhat expected to get enough Senate Democrat votes to back the energy initiative. But, as National Republican Senatorial Committee Press Secretary Brook Hougesen noted, Landrieu seems to have little influence over her fellow Senate Democrats.

“Mary Landrieu has been telling anyone who will listen how influential she is after being named Chairman of the Energy Committee, but it turns out that Landrieu isn’t influential at all,” said Hougesen. “The Keystone delay simply reinforces how ineffective, powerless and without influence Senators like Mark Begich, Mark Pryor, Mark Warner and Kay Hagan are.  Democrats like Mary Landrieu who stand loyally by Harry Reid’s side are responsible for this failed Keystone outcome that hurts middle-class families and workers throughout the country.”

As previously reported, the move by Reid was indirectly supported by Landrieu, however, as she voted for Reid when it came time to elect a majority leader and donated $10,000 to Reid back in 2010.