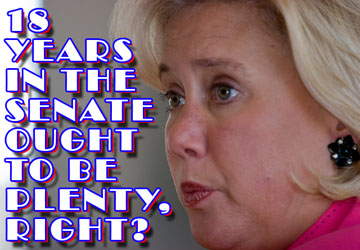 …and it’s the Keystone XL Pipeline which is the vehicle for that recognition.

And it’s all a fraud.

First of all, Energy isn’t the most important Senate committee to Louisiana; Environment and Public Works is. Energy is important, but nothing that Louisiana needs done in the oil and gas field will get done without the Environment and Public Works Committee having a say on it. EPW deals with offshore oil drilling as much as Energy does, and EPW also handles things like the Army Corps of Engineers and its work on levees and coastal protection.

And if the Republicans get control of the Senate, David Vitter will control EPW – at least until he’s elected Governor in November of 2015 (if he is). So it’s a wash.

And second of all, how indispensable is an Energy Committee chair who’s merely a figurehead and can’t actually accomplish anything?

Because that’s Mary Landrieu. She has opportunities galore to get something done as Energy chair, and from this quarter she’s striking out looking on each one of them.

There have already been a number of those – the Rhea Suh nomination being one of them – but the most glaringly obvious one of the bunch is Keystone XL.

Polls show that by as much as 66-23 the American people want that thing built. You really can’t find too many issues the public is this united on. Keystone XL is as easy a layup as there is.

And yet Mary Landrieu can’t move the ball on Keystone XL at all.

She signed on to legislation by Republican Sen. John Hoeven of North Dakota which would force the approval of the pipeline, and she says a vote will come this week on that legislation, but if there has ever been a Johnny-come-lately on Keystone XL legislation it’s Mary Landrieu. To wit…

In 2012, Landrieu Was Not A Co-Sponsor Of A Hoeven Bill To Approve The Keystone Pipeline Without Presidential Approval. (S. 3607, Introduced 9/20/12)

In 2012, Landrieu Was Not A Co-Sponsor Of Hoeven’s Domestic Energy And Jobs Act Which Included A Provision To Approve The Keystone Pipeline. (S. 3445, Introduced 7/26/12)

NOTE: In 2012, Landrieu Did Sign On As A Co-Sponsor To A Hoeven Bill, And A Hoeven Amendment To Approve The Keystone Pipeline – But She Was Not An Original Co-Sponsor Of Either.

But Landrieu sends out tweets on the pipeline, she sends out press releases, she’ll once in a while hold a press event or send a letter.

Where is the Senate hearing that investigates Obama’s failure to approve that pipeline? Where is the grilling of administration officials to find out who’s making the decision to slow-play the pipeline? Landrieu has the power to put on one of those dog-and-pony shows, and yet she’s done nothing to make them happen.

The mere threat of having a Democrat-controlled committee embarrassing the administration with a contentious Keystone XL hearing that exposes how in thrall to environmental loons this administration is would likely move the pipeline forward. And yet there is no hearing. Instead there is a piece of legislation which purportedly forces approval – but without 67 votes for it in the Senate it will just be vetoed.

Leadership – and integrity – would have been for Landrieu to have immediately conducted a Keystone XL hearing in order to force the issue to a head. She’s all talk, but she lacks that integrity. It’s obvious to anyone who pays attention to this issue. Were Landrieu an effective negotiator for getting Keystone XL built, she would have withheld support for Harry Reid as her party’s leader in the Senate (rather than blindly endorse him) until he allowed a vote on Keystone XL – that would have shown the kind of independence and toughness she claims to have.

That having been said, it’s also obvious Landrieu will milk this issue for everything she can get. You’ll get sound and fury from her for five months and then, as an October Surprise, you’ll see Keystone XL be forced on Obama at the last minute.

We know this because if you’re a petty politician it’s what you’d do, and we know this because the Left can’t keep their mouth shut. National Review’s Jim Geraghty found this nugget amid a ridiculous Rolling Stone piece about environment and energy issues…

Inside the beltway, there was speculation that the President could announce a decision on the pipeline early this summer. But late in the afternoon on Good Friday – the darkest depths of the news cycle – the State Department released a statement that a decision on the pipeline would be once again delayed: “Agencies need additional time based on the uncertainty created by the ongoing litigation in the Nebraska Supreme Court which could ultimately affect the pipeline route.” The White House denies the move was in any way political. “I know there’s a great urge and has always been to make this about politics,” White House press secretary Jay Carney said later. “The issue here has to do with a court decision in Nebraska and its impact on the ability for the State [Department] process to continue for agencies to be able to comment.”

Republican Senator Lisa Murkowski of Alaska, a pipeline supporter, called the delay “a stunning act of political cowardice.” But Jane Kleeb, founder of Bold Nebraska and one of the leaders of the anti-pipeline movement, described the move to me as “a pretty brilliant move” that will give red state Democrats like Mary Landrieu and Mark Begich an easy and highly theatrical way to distance themselves from the president in the mid-terms, as well a rallying point for oil and gas money to support them. “Obama just used oil and gas to get red state dems elected,” Kleeb wrote. “No way will gas and oil push against Landrieu and Begich.”

“Sometimes the art of politics is the art of delay,” says Kalee Kreider, a D.C. consultant who works on climate issues.

So we might as well start counting down to October, when we can imagine we’ll see a culmination of Landrieu’s “efforts” to get this pipeline built. Maximum effect, and so forth.