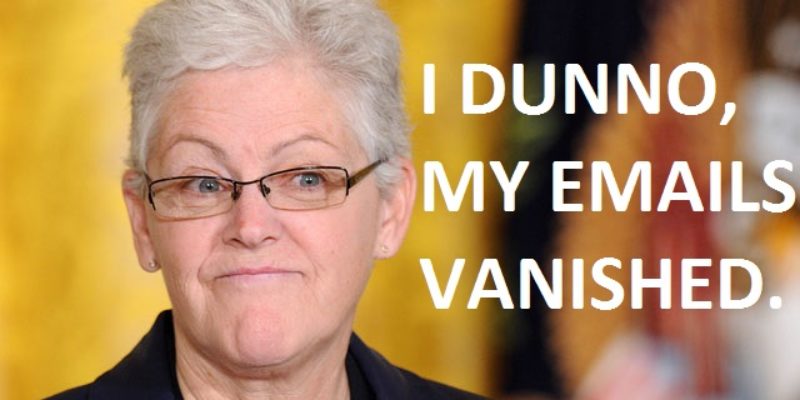 The Internal Revenue Service (IRS) is not the only federal agency that cannot find their emails, the Environmental Protection Agency (EPA) is now following in their footsteps, claiming that government computers crashed and essentially ate their emails.

As the Washington Examiner reported, EPA Administrator Gina McCarthy told the House Oversight and Government Reform Committee said the agency has not yet been able to get a hold of emails that a former employee of the EPA that was “involved in a controversial EPA evaluation of a proposed mine project in Alaska’s Bristol Bay.”

It was a dispute with Rep. Mark Meadows (R-NC) that McCarthy ultimately claims that the EPA cannot quite find the emails, conveniently enough.

Rep. Mark Meadows, R-N.C., asked McCarthy: “Were all of his emails preserved according to the Federal Records Act or was a law violated?”

McCarthy responded: “I think we have notified the appropriate authorities that we may have some emails that we cannot produce that we should have kept. I do not know yet whether we can recover all of these or not.” She added that later: “We are not sure where the failure came from and what it is attributed to.”

A congressional committee aide said that the “hard drive crash in 2010 is preventing the recovery” of the emails. Ironically, the hard drive crash happened at the very same time that the committee began to investigate the incident at the EPA.

The former EPA employee in question was Philip North, a fish biologist. North contributed to an agency study released in January that said a proposed mining project in the Bristol Bay area could hurt the salmon population. The agency has not been able to recovery any emails from him from 2002 through 2010.

The EPA’s Inspector General is probing some possible “collusion” between people inside the agency and environmental groups opposed to mining regarding the report’s recommendations. “I look forward to his report,” McCarthy said.

McCarthy said that the agency is having a hard time getting the emails because they have lost touch with North. However, with all federal agencies, the emails should have be backed up. Meadows is not buying the claim by McCarthy, citing that the IRS is trying to pull a fast one on congress too.

“Two different government agencies tried to convince Congress and the American people this week that emails disappear into thin air. We didn’t believe it when we heard it from the IRS and I’m not inclined to believe the EPA’s excuses. The Federal Records Act is very clear. This is either willful ignorance on the part of the EPA or gross incompetence. I hope the EPA will follow through and turn over the relevant information it promised to the Oversight Committee months ago.”