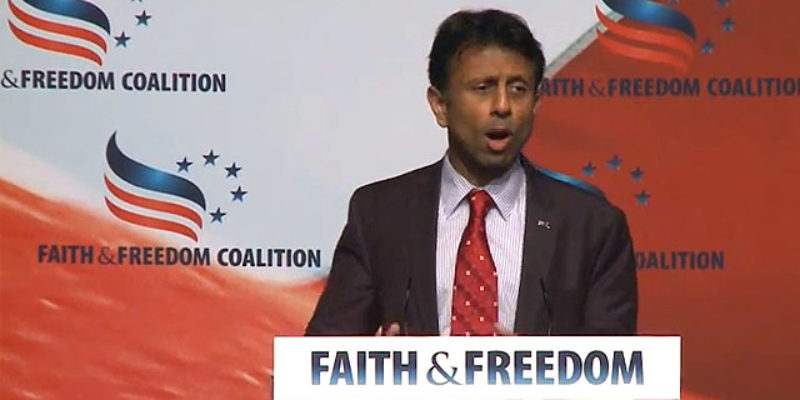 If you’ve been to any of the conservative confabs around the country lately you might have heard this speech Louisiana Gov. Bobby Jindal is giving – we saw him give it at the Heritage Foundation’s Resource Bank event in New Orleans back in late March, and he gave it at RLC in the Big Easy two months later.

And he gave it again at the Faith and Freedom Coalition’s event in Washington over the weekend.

If you haven’t seen the speech, you’ll probably like it. As stump speeches for 2016 (which is precisely what this is) go, it’s pretty entertaining stuff. It talks about Jindal’s parents coming to Louisiana as immigrants from India, and his father’s efforts to find a job and pay the hospital bill for his birth. He talks about how it was a simpler time then, and his father was able to pay for those hospital bills by writing a check each month until they were covered based on a handshake agreement with the doctor who delivered him. He jokes that he was a baby born on layaway.

There is policy in the speech, and a recitation of the travails he’s endured in trying to reform education and produce school choice in Louisiana despite the intrusion by Eric Holder and the Justice Department. He strikes a verbal blow against Common Core. But most of all he attacks the Obama administration for its incessant abuses and scandals, and he finishes with a prediction that the people of the country will ultimately rebel against Obama’s leftism.

Perhaps he’s right. It certainly appears the speech was well-received. In any event, see this for yourself if you’ve got 32 minutes to spare…

Interested in more national news? We've got you covered! See More National News
Previous Article VIDEO: Bill Says Hillary Not ‘Out Of Touch’ Because She Grocery Shops
Next Article Guess Which Other Federal Agency Can’t Find Their Emails