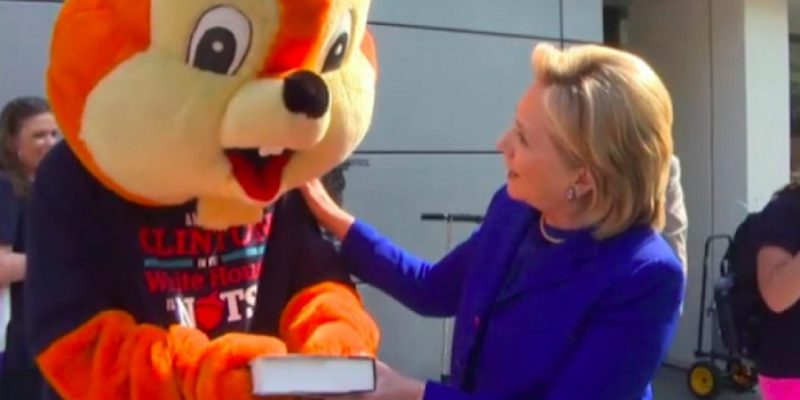 The Republican National Committee (RNC) squirrel that has been chasing around Hillary Clinton, warning people of her 2016 presidential run, on her book tour got a little gift from the former First Lady, her book titled “Hard Choices.” Here’s a snippet of the squirrel in case you missed it:

And by now you’ve probably seen the hilarious reviews on Clinton’s book. The squirrel, though, was confronted by Clinton and given a copy of the book, with Clinton saying “I hope you will make the hard choice and read my book.”

“The squirrel was surprised that Hillary would engage it, though I must say the squirrel was upset it couldn’t ask Hillary the tough questions Americans want answered. The fact that Hillary engaged just proves that team Hillary is nervous about the Republican opposition,” Williams said in email to National Journal. “The squirrel has already put the book in the fiction section of his library.”

Speaking for himself in the first person, the squirrel added that he opposes a likely Clinton presidential run because, “another Clinton in the White House is nuts!” President Obama’s two terms have “hurt all Americans (squirrels like me included),” the rodent continued, adding that a Clinton presidency would basically be a third Obama term.

Liberal pundits have been quick to mock the tactic by the RNC, but the squirrel said the mocking clearly “proves just how nervous they are that my efforts will get Hillary not to run.”