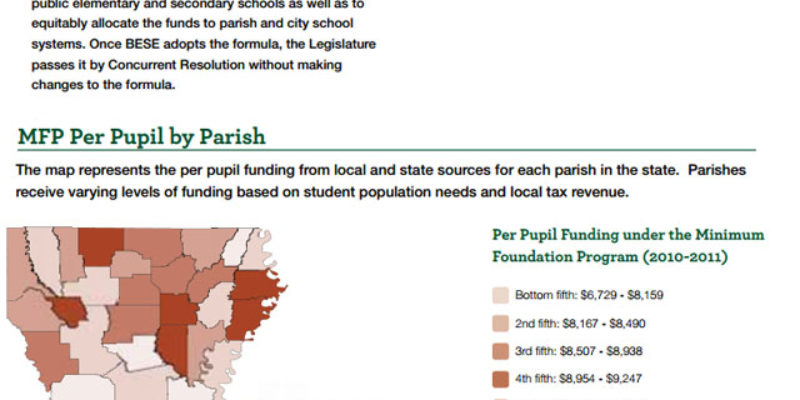 …but don’t do so in hopes that you’re going to get a great deal of quality analysis out of it.

The panel discussion on the issue, which focuses solely on the topic of schools, has the two women who did the PBS Frontline episode on St. George which airs tonight, Lionel Rainey representing the St. George organizers and someone named Jody Armour, who goes by the handle @NiggaTheory on Twitter. (Armour is a law professor at USC, and he is exactly who you might t expect him to be.)

More after the video…

The big point being discussed here has to do with how the horrible white people in St. George are going to steal away all the tax revenue that supports the East Baton Rouge schools when they incorporate their new city. But there’s a problem with that discussion, something that Rainey didn’t get much of a chance to address.

Namely, that making that accusation, as Armour does, shows a complete ignorance of how education funding works in Louisiana.

The Cowen Institute at Tulane did an excellent information piece on that issue a while back, and now would be a good time to show some of it… 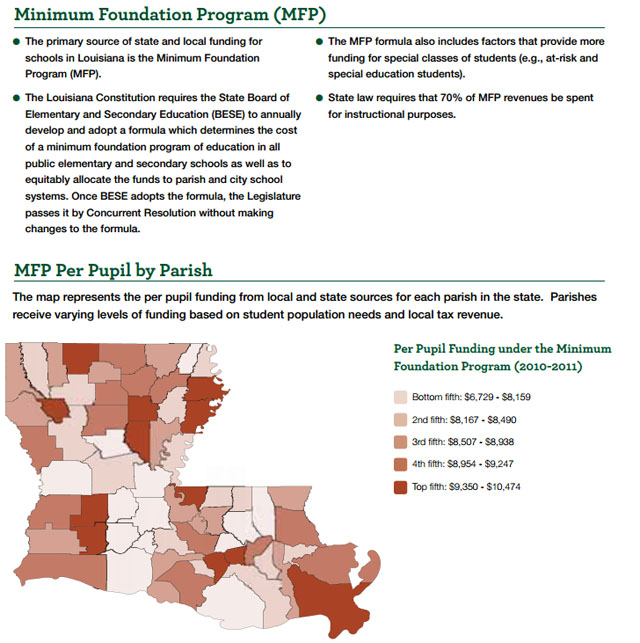 What this means is that via the MFP, funding flows inherently faster to school districts which have lower amounts of locally generated revenue.

And what it means is that if St. George would “steal” locally-generated revenue from the East Baton Rouge school system, then EBR would see that made up through the MFP. Remember that the incorporation of St. George and the creation of a new school system doesn’t just take money away from EBR; it also takes kids away that EBR no longer needs to provide services to.

And Woodlawn isn’t even at the average of funding for EBR. The district average per pupil in 2011-12, which is the last year of funding listed by the Louisiana Department of Education website, was $12,327.

So there will be plenty of funding for the kids in East Baton Rouge schools if St. George were to “break away.” There might not be quite as much gravy for the system to pass around in enriching consultants and bureaucrats and other hogs connected to the trough. But who cares about them? Maybe Armour does, and he’s more disingenuous than he is ignorant. You could look at the fact he’s an academic himself and the fact that he sends his kids to private schools rather than the horrible public schools in his part of Los Angeles, and go with disingenuous, or you could take the fact that he thinks there is virtue in his kids going to private schools since he still pays taxes to fund those horrible public schools and that makes him better than the St. George people, marry that with the truth about how K-12 education is funded in Louisiana and conclude it’s breathtaking ignorance at work.

The fact that he thinks we have counties in Louisiana instead of parishes would bolster that argument.

Rainey, meanwhile, put out a press statement in advance of the Frontline piece tonight…

PBS Frontline will air a “documentary” tonight at 9:00 cst titled “Separate and Unequal” centered around the ongoing effort to create a new city and school system in East Baton Rouge Parish. The Frontline episode portrays this movement as one “motivated by race and class,” and it continually focuses on the desegregation lawsuit that lasted for decades in this parish.

We feel it is unfortunate Frontline has chosen to do so, as its focus insures an inaccurate portrayal of the struggle taking place in southern East Baton Rouge Parish.

This movement has NOTHING to do with class or race. It has everything to do with parents (black and white, rich and poor) who are fed up with the current education, or lack thereof, in the public schools in East Baton Rouge Parish. Parents who will do whatever it takes to give their children a chance. In fact, the St. George School System would be the definition of diverse, as it will most likely be very close to 50% Caucasian and 50% African American.

It must be noted that the primary opposition of this movement comes from the current power structure in the City of Baton Rouge, who enjoys spending your tax dollars, and a small group of magnet-school parents. We do not disagree that EBR’s gifted-and-talented and magnet programs are outstanding. But what about every other student who doesn’t hit the lottery to get in one of these programs? Shouldn’t every child be educated equally? The opposition of this movement is the status quo and they are happy with things the way they are.

We agreed to participate in this documentary, which was sold as a film about education reform, to have our side of the story told. While we were given that ability, the entire narrative is spun in a way that inaccurately portrays this movement.

Making this movement about class and race is simply lazy. This line of argument fits into an easy narrative, which is convenient for writers, editors and producers–their audience has seen this movie already, it’s just a matter of plugging in the characters and plot points. We hope that most people will see through the rhetoric and see this effort for what it is… parents wanting better for their children and an unincorporated area of the parish that wants local control and representation.

We look forward to the day when people stop focusing on the color of someone’s skin or how much money they make and focus on the character of the individual. But then again, that probably wouldn’t be nearly as entertaining, wouldn’t sell nearly as many papers or generate nearly as many viewers.

Our story has never changed. All we have ever asked for is that the people of this area be given the chance to vote on their future. Pass or fail, they deserve that right.