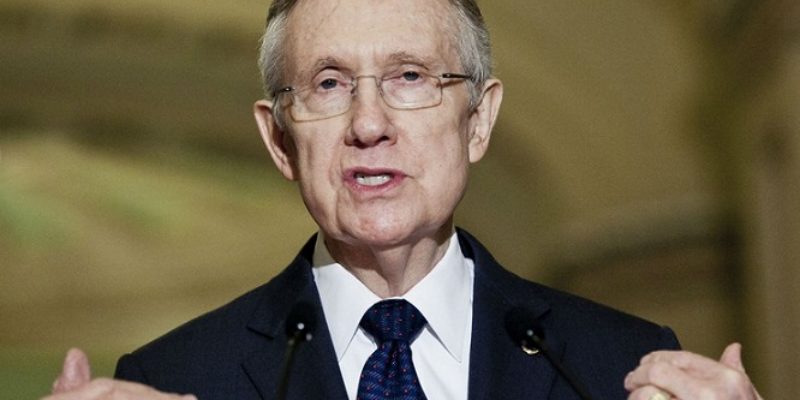 Senate Majority Leader Harry Reid (D-NV) said today that the southern border is 100 percent secure already, even though there has been a massive influx of illegal immigrants from Central America making their way into the country.

At a weekly policy lunch of Senate Democrats, Reid told the press “The border is secure. Sen. Martin Heinrich (D-NM) talked to the caucus today. He’s a border state senator. He said he can say without any equivocation the border is secure.”

Reid said that congress needs to stop worrying about the security of the southern border and focus more on $3.7 billion in aid that President Obama has requested in order to take care of the illegal immigrants at the border.

Downplaying the need for congress to speed up deportations of illegal immigrants who are minors at the southern border, Reid said there is no need for new legislation to deal with the problem.

“My personal belief there is the law that has created some of the controversy now, there’s enough … leeway there [that] the executive branch of government doesn’t need new legislation,” he said referring to the William Wilberforce Trafficking Victims Protection Reauthorization Act of 2008.

Some critics have blamed that law for the surge of minors because it grants an advocate and court date to children from non-neighboring countries who arrive in the United States illegally.

Reid also said that he does not support a bill by Sen. Whip John Cornyn (R-TX) and Rep. Henry Cuellar (D-TX) that would “expedite deportations as ‘too broad.'”

The Cornyn-Cuellar bill would amend the Wilberforce trafficking law by treating unaccompanied migrant children from Central America the same as those from Mexico. Under current law, Mexican children do not receive the same due process rights as minors from Central America and are deported on a much shorter timeframe.

Cornyn-Cuellar would allow unaccompanied minors to make a claim for asylum in the United States before an immigration judge within seven days of receiving a screening from the Department of Health and Human Services.

Actually, none of this southern border crisis would have ever occurred had the comprehensive immigration reform bill that Sen. Marco Rubio (R-FL) took major flack for had passed through the Senate and House.

The ‘Gang of Eight’ immigration reform bill, which Sen. John McCain (R-AZ) also helped craft, would not however secure the border “first,” as news pundits and politicians have said. It would only set up “triggers” to secure the border, while legalizing the millions of illegal immigrants who are already living in the country.