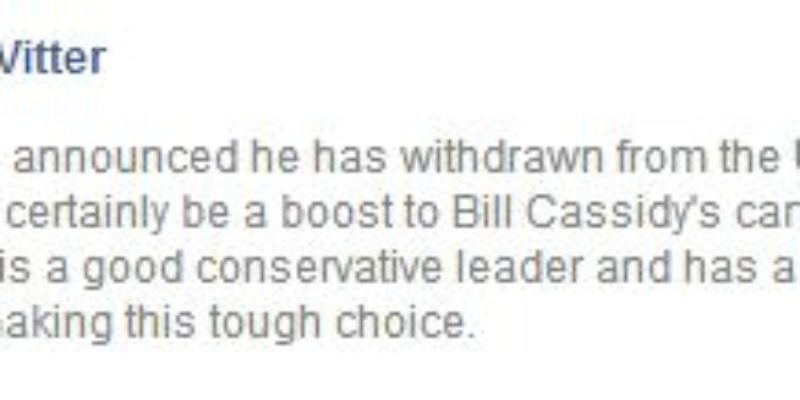 UPDATE #2: Roger Villere, the chairman of the Louisiana GOP…

“As a businessman and elected official, Paul Hollis’ conservative leadership has been an asset to Louisiana. Running for elected office is a trying, tiring process, but Paul did so with a great attitude – meeting and working with party activists around the state to spread his message and vision. Paul ran a positive campaign, talking about his ideas and plans for the future without resorting to attacking his fellow Republicans. He knows our ultimate goal – defeating Mary Landrieu and retiring Harry Reid as Majority Leader – can only be achieved with a united Republican Party.

“We look forward to working with Paul in the future to win elections and advance conservative solutions to the issues facing our state.”

Conservative businessman and Republican lawmaker Rep. Paul Hollis (R-104) is dropping out of the United States Senate race in Louisiana.

“After prayer and thoughtful consideration, I have decided to withdraw from the U.S. Senate race in Louisiana,” said Rep. Hollis.  “I am thankful for the outpouring of support from voters throughout the state and truly appreciate the tireless efforts of our campaign’s staff and volunteers.

“While my run for the U.S. Senate has come to an end, my desire to advance the conservative agenda is stronger than ever.  In the weeks and months ahead, I will continue to fight for candidates and causes that will move Louisiana and America forward.  Together, we can end Mary Landrieu’s liberal reign in Washington and ensure a brighter future for generations to come.”

Hollis wasn’t showing any better than five percent in any poll, and a lot of people were speculating that what he was really doing was trying to build name recognition for a future run. That speculation held that Hollis would stick around long enough so he could broker a deal to get some considerations from Cassidy in return for an endorsement.

But he looks like his tank might be a little too empty to be able to pull that off.

Still, Hollis did himself some good during this campaign. Speeches he gave over the last couple of weeks to the Greater New Orleans Republicans and the Republican State Central Committee about the race generated some positive response, and the general sense has been that Hollis being in the race wasn’t destructive to anybody’s chances of knocking Mary Landrieu out of the race.

Who benefits from Hollis being out? It’s hard to say.

The majority of Hollis’ support will likely go to Cassidy. Based on how Hollis carried himself in the race – he repeatedly pledged that he wouldn’t attack any other Republicans, which Cassidy also pledged to do but Rob Maness would not – and based on an easy reading of his political interests, he’s likely to endorse Cassidy.

But Maness can benefit to some extent from Hollis being out of the race as well. Maness is now the only unconventional option left, and he won’t have to share that mantle with the state representative. And while Hollis’ support may go mostly to Cassidy, if you’re Maness and you can pick up one or two percent from Hollis’ departure – which might get you into double figures in a poll or two – it could be enough to turn you from a minor candidate into something more significant.

But if Hollis getting out can begin to show Cassidy at or above the numbers Landrieu is getting in some of these multiple-candidate polls, it could reverse what is perceived to be a slide of sorts in his fortunes.

It’s possible everybody gains from Hollis’ departure from the race, and the voters have what appears to be a final field to choose from.

Interested in more national news? We've got you covered! See More National News
Previous Article SADOW: The Dems Are Licking Their Chops About Maness Saving Landrieu
Next Article Garret Graves Will Drop A Massive Number For The Second Quarter