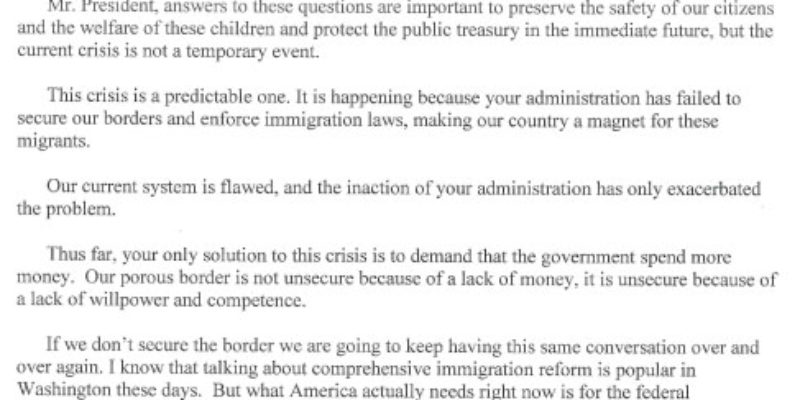 From a press release by Sen. David Vitter, who has been quite vocal about the participation of the federal government in bringing illegal aliens to Louisiana, comes some research and an actual figure…

U.S. Senator David Vitter (R-La.) said today that the Obama administration is hiding numbers about how many unaccompanied alien children (UAC) are in Louisiana. On July 10, 2014 Vitter requested specific information about how many immigrant minors are being relocated to Louisiana. While the U.S. Department of Homeland Security has not responded, Vitter has uncovered that there are a total of 3215 cases in Louisiana.

“I’ve been warning the administration for months that this would happen. Our borders go unsecured and our president does everything in his power to hinder Border Patrol, so an influx of illegal immigrants should come as no surprise,” Vitter said. “The administration is trying to hide the truth, but we know that there are at least 3215 cases in Louisiana. This is already a national crisis – it certainly shouldn’t become a Louisiana crisis too.”

Vitter has had to confirm through an anonymous Immigrations and Customs Agency official that there have been 1,259 new cases opened for juveniles in Louisiana since the crisis began. There were already 1,956 juvenile cases, putting the total at 3,215.

On the Senate floor last week Vitter highlighted several facilities, including military bases, in Louisiana that have been contacted by the Obama Administration to house unaccompanied alien children (UACs).

Below are the details of who has been contacted…

Barksdale was asked via Air Force Global Strike Command by the Department of Defense on behalf of the Department of Homeland Security on three separate occasions about capacity (most recently on 30 June) to see what was feasible.

Hirsch Coliseum in Shreveport, LA was contacted by International Association of Fairs and Expositions (IAFE) to see if they could house illegal immigrants at the fairgrounds. Hirsch has been used for housing people displaced by hurricanes.

Vitter also highlighted that the Customs and Border Protection (CBP) has confirmed that of the 381,458 apprehensions in the Rio Grande Valley sector of the Southwestern Border since October 1, 2013, only 57,567 or (15 percent) were children 17 or younger; 268,493 were adults without children.

In a letter on January 15, 2014, Vitter called out the administration for its practices of assisting foreign children being smuggled into the country illegally without penalizing their parents. Vitter asked DHS how many times this practice has occurred but didn’t get an answer.

So over 3,200 cases of UAC’s – unaccompanied alien minors – in Louisiana to date. There is no report as yet of them being housed in a particular facility, which we take to mean that they’re brought here, given a court date for a deportation hearing, and let go. Do they ever show up for the court date? Of course not.

With word of this latest batch of UAC’s, the Jindal administration finally appears interested in the issue. Several members of the state legislature, we’re told, have been pressing the governor to get involved in trying to keep the feds from laying off the illegal-immigrant surge inside Louisiana’s borders, but Jindal has been quiet…until today. 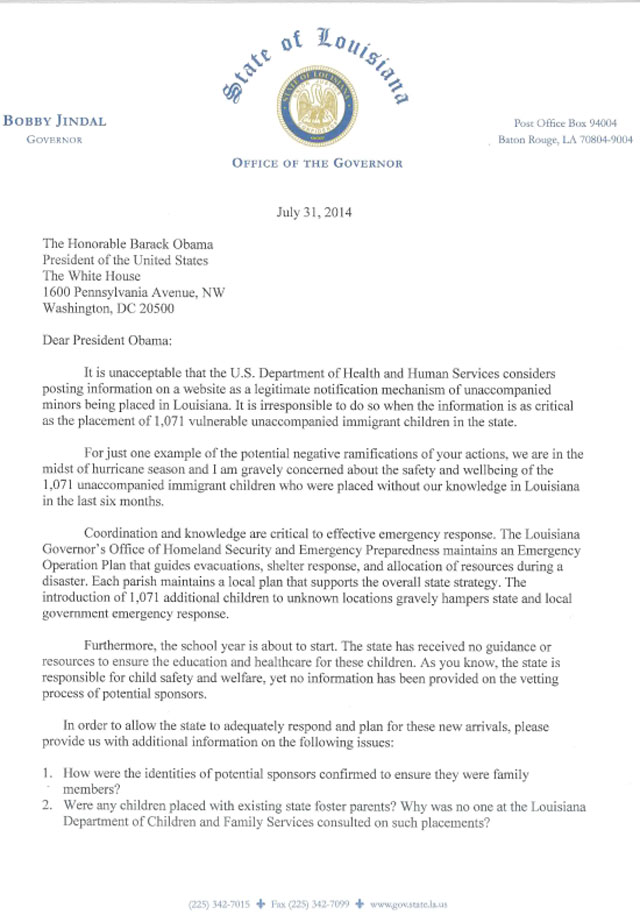 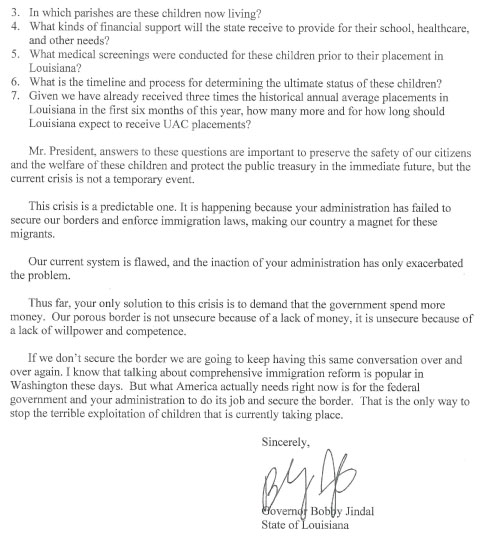 That’s a pretty blistering letter, and it does a pretty good job of putting the feds on notice that they’re imposing a fairly serious burden on the Louisiana state government without giving them any communication as to what that burden might ultimately be.

And you can bet this isn’t over. The 3,215 Vitter uncovered, which we’re only assuming includes the 1,071 Jindal discusses in his letter, are only the cases the Senator and Governor are aware of.

There could be a lot more, and more could be (in fact almost assuredly are) coming all the time. And it’s quite clear that the Obama administration is not going to inform Vitter, Jindal or anyone else through official channels – at least not in a timely fashion – as they arrive.