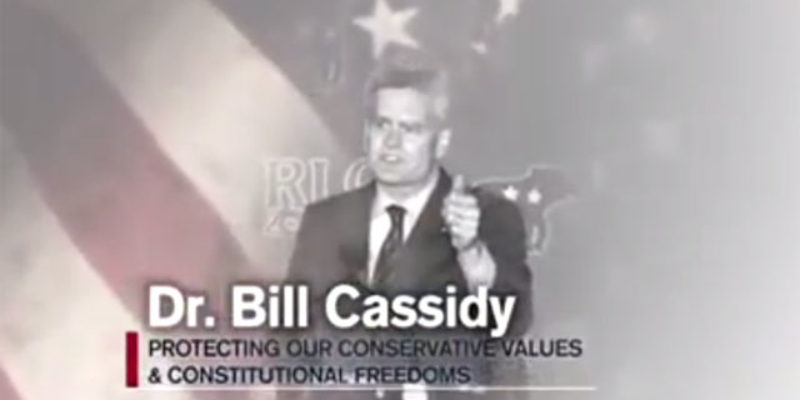 If you’ve had your TV on cable news in the last day or so, you may have seen this ad…

It’s not a campaign ad from Bill Cassidy. It’s an ad from his Super PAC, Citizens for Conservative Leadership.

Of course, you’re not supposed to say they’re Cassidy’s Super PAC. He doesn’t actually have any connection to it, because legally he can’t.

So who is Citizens for Conservative Leadership? Well, it’s run by Josh Robinson, longtime political consultant and Cassidy’s former Chief of Staff. And the statewide operations are going to be run by Jason Hebert and Scott Hobbs of The Political Firm, who we discussed recently surrounding subject matter of a different kind.

And there’s a microsite, at SenateMatch.com, which is a little different.

Where did the money come from? The donor list from OpenSecrets is interesting…

Some of these folks are fairly standard Republican donors in and out of Louisiana, but one of them in particular is absolutely delicious. Our long-time readers might see Greg Hamer’s name and it may ring a faint bell; it did with us. So we searched our archives and came up with this. It’s a story about the aftermath of Mary Landrieu’s Obamacare vote, when a delegation from the Louisiana Restaurant Association trudged up to DC to explain to her how awful the effects of that bill would be on their businesses. Greg Hamer, who owns a number of KFC and Taco Bell franchise locations, was one of the delegation and as it turns out he sent out an e-mail to associates letting them know Landrieu’s response to their complaints…

It matters not if you are liberal or conservative…We all had better start to pay attention to this lesson…..

I was in Washington DC yesterday. With 20 other restaurateurs we visited with the Louisiana congressional delegation. We had an enlightening talk with United States Senator Mary Landrieu, if you’re interested in what a member of the Democratic leadership of the Senate had to say to her constituents, then read on.

Talking directly to me because of a question I asked her, concerning the fact that we will be forced to shrink our workforce and lay off several hundred employees if Obamacare takes effect she put me in my place. She said the following:

As God be my witness that is what she told us…of course I am not quoting her, we were all in too much shock to remember her exact words. But this is from a Senator with 5 more years in office, and the arrogance was unbelievable.

Everyone is for Health Reform, but if the cost is putting hundreds of thousands of Americans out of work, surely we can find a better way.

Everyone is for helping our environment, but if the cost is putting hundreds of thousands of Americans out of work, surely we can find a better way.

If you believe the cost being forced on businesses by our current regime in power is not going to be passed on to the consumers—and that is you and I— then you need to stop and take another look.

When government action causes the things I buy to go up, they may not call it increasing taxes…but the effect is just the same.

I hope you will find the item below informative…because you had better believe that is where the Democratic Party is trying to take us. And if you believe as I believe that what they are doing is going against what America stands for, then you have one final chance to stop this madness and it comes in November. Go out and vote for a Conservative so they can first STOP the madness and then begin to curb it.

And when Hamer’s email went out, Landrieu immediately pushed out a letter to the LRA basically calling him a liar – while at the same time validating most of what he said.

That was back in 2010. Four years later, Hamer is ba-aaack. And he’s got $30,000 in to the Super PAC dedicated to shipping Mary out of the Senate. It’s always fun to see cause and effect in politics.