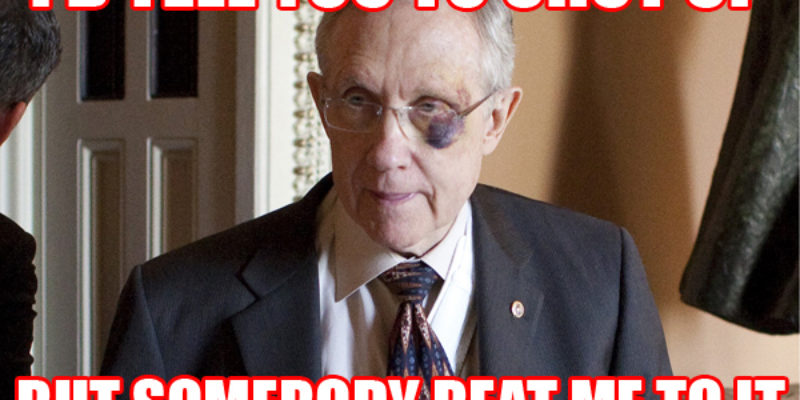 …not before he managed to put his membership on the record with a vote. And we now know who thinks it’s a good idea to change the Constitution to put Congress in charge of who gets to practice political speech and in what amounts.

You may have heard about this. The Democrats in the Senate have been pushing a constitutional amendment that would wipe out the Citizens United case and also McCutcheon v. FEC, two recent Supreme Court cases which established the fact that campaign contributions constitute political speech protected by the First Amendment. The measure in question, which would have needed a two-thirds majority in the Senate that was never – never – going to materialize, would have explicitly given Congress and state governments the power to regulate and limit political fundraising and contributions and it would also have barred the Supreme Court from hearing cases on that subject matter ever again.

It was a joke, and Republican Senate minority leader Mitch McConnell rightfully tore it to shreds…

“Given the urgency of this situation, I have to say it’s a little disconcerting to see the Democrat-led Senate focusing on things like reducing free speech protections for the American people. At a time when the rest of the country is worried about the threat of ISIL. At a time when millions wonder how they’re ever going to find a job in this awful economy. At a time when we find out that crushing federal regulations have gotten so out of control that they now cost our economy more than $2 trillion a year. This is what they chose to make their top legislative priority this week. Taking an eraser to the First Amendment. And now they plan to devote almost all the remaining time between now and November to what Democrats like to call ‘messaging bills.’ These are bills designed intentionally to fail so that Democrats can make campaign ads about them failing.”

The Senate has little time left before the fall recess kicks in and the members return home for midterm election campaigning, which means it’s urgent that they prioritize the federal budget and actually get that done. Instead, Reid wasted almost a whole week on a throwaway bill representing some sort of leftist wet dream that somehow there’s an American consensus for allowing Chuck Schumer and Thad Cochran to decide what amounts you can give to candidates and causes and how many you’re allowed to give to.

Yesterday, Reid’s throwaway bill came to a key vote. Republicans were fighting cloture on the bill and Reid needed 60 votes – that he wasn’t going to get. But he forced the vote anyway as a minstrel show for the moneyed Left and the mouth-breathers at the Daily Kos, and this was the result…

So how did Mary Landrieu vote? How do you think?

Landrieu, whose campaign is being propped up by shady money from Reid’s Senate Majority PAC and something called Patriot Majority PAC, a union-funded outfit which is running attack ads against Bill Cassidy beating him up from the right, voted to put herself and the rest of the political class in charge as arbiters of who gets to fund American politics and in what amounts.

Mark this down as one more story of cooperation by Landrieu as a house slave on Reid’s plantation. Except this time there wasn’t much of a harvest.

Interested in more national news? We've got you covered! See More National News
Previous Article Susan Rice Still Has A Job
Next Article HERE WE GO: There Are More Examples Of Mary’s Billing The Taxpayer For Fundraising Trips