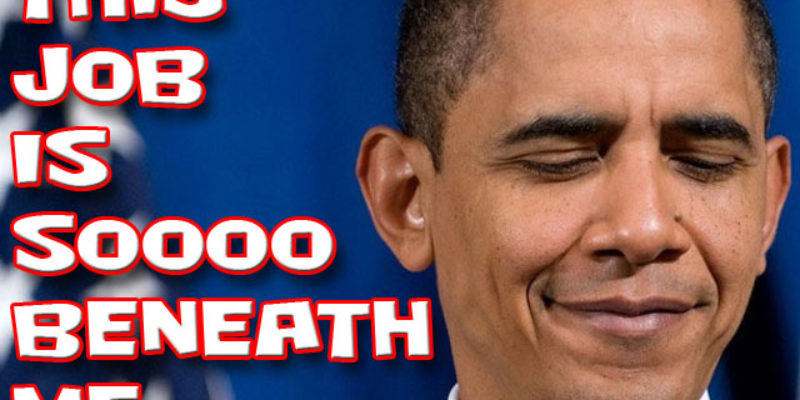 Most of the time, he takes a written report in lieu of an actual briefing. And uses it as a coaster. What a shock, then, that he’s busy blaming the intelligence agencies for missing the boat on ISIS when they howl that they’ve known about ISIS’ growth practically in real time and have said so.

A new Government Accountability Institute (GAI) report reveals that President Barack Obama has attended only 42.1% of his daily intelligence briefings (known officially as the Presidential Daily Brief, or PDB) in the 2,079 days of his presidency through September 29, 2014.

The GAI report also included a breakdown of Obama’s PDB attendance record between terms; he attended 42.4% of his PDBs in his first term and 41.3% in his second.

The GAI’s alarming findings come on the heels of Obama’s 60 Minutes comments on Sunday, wherein the president laid the blame for the Islamic State’s (ISIS) rapid rise squarely at the feet of his Director of National Intelligence James Clapper.

“I think our head of the intelligence community, Jim Clapper, has acknowledged that I think they underestimated what had been taking place in Syria,” said Obama.

According to Daily Beast reporter Eli Lake, members of the Defense establishment were “flabbergasted” by Obama’s attempt to shift blame.

“Either the president doesn’t read the intelligence he’s getting or he’s bullshitting,” a former senior Pentagon official “who worked closely on the threat posed by Sunni jihadists in Syria and Iraq” told the Daily Beast.

On Monday, others in the intelligence community similarly blasted Obama and said he’s shown longstanding disinterest in receiving live, in-person PDBs that allow the Commander-in-Chief the chance for critical followup, feedback, questions, and the challenging of flawed intelligence assumptions.

“It’s pretty well-known that the president hasn’t taken in-person intelligence briefings with any regularity since the early days of 2009,” an Obama national security staffer told theDaily Mail on Monday. “He gets them in writing.”

The Obama security staffer said the president’s PDBs have contained detailed threat warnings about the Islamic State dating back to before the 2012 presidential election.

The man in the White House has never run anything in his life. He has less executive experience than the night-shift cashiers at convenience stores.

Barack Obama is the president of the United States, but he’s the guy hired at your office either through family connections or affirmative action who never, ever does his job. Instead, he hangs out at the water cooler and harangues his co-workers with novel ideas about how the company ought to be run – and when his supervisor accosts him in an effort to make him go back to work he makes accusations of racism.

When you put that guy in the White House, you get dereliction of duty. You get a president who doesn’t do his job.