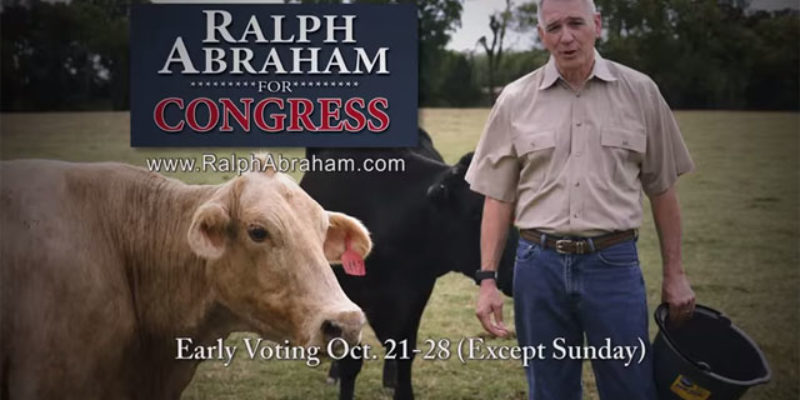 With about two weeks left in the 5th District race, there are basically three Republican candidates with a shot at making the runoff against Democrat Monroe mayor Jamie Mayo – and an outside chance that two of the three Republicans might climb over Mayo into a runoff.

There is no particularly reliable independent polling on the race at this point, and therefore it’s difficult to assess what the chances Vance McAllister, Zach Dasher and Ralph Abraham have for grabbing positions in the runoff.

What we can do, though, is to assess the TV ads being run in the Monroe and Alexandria media markets to look at the messaging each of them have.

Abraham’s message is fairly simple, and fairly conventional. It’s what you’d expect from someone who’s both a doctor and veterinarian…

Dasher, in the other hand, is pushing a more aggressive cultural-conservative theme. The basic message isn’t dissimilar to Abraham’s, but he’s infusing it with a lot of the Robertson/Duck Dynasty clan’s unapologetic Christian conservatism. You can see that in the punch line to this ad…

Meanwhile, McAllister’s message sounds a lot like Abraham’s and Dasher’s…

…but he’s also got another ad which addresses his sex scandals. Sort of.

One thing noticeable about McAllister in his ads is how he’s porked up nicely since his arrival in Washington. A POLITICO piece by Burgess Everett out today doesn’t miss his weight gain…

The smooch hasn’t just hurt McAllister personally and politically; it’s also been tough on him physically.

Rep. Markwayne Mullin, a chiseled Oklahoma Republican who drove eight hours to hit the trail with McAllister on this Saturday, incessantly chides his good buddy for putting on weight, telling constituents that of the hundreds of House members, “not all of them look this ugly.”

Later, at McAllister’s house, a porch swing cracks underneath them. Mullin blames McAllister.

As he gobbles banana cream pudding, McAllister admits he’s gained about 40 pounds. Before McAllister left for midterm recess, he says, House Speaker John Boehner buttonholed him: “You’re getting a little thick.” McAllister attributes the gain to Washington’s “filet mignon.” Boehner’s reply: “You ever thought about getting the fish?”

At the end of the day, the Democrats are praying it’s McAllister who hangs on to the runoff spot opposite Mayo, and they further hope the overwhelmingly Republican district chooses to throw him out in the runoff in Mayo’s favor. That’s highly unlikely, but Republicans generally hope that either Dasher or Abraham manage to vault past him into a head-to-head battle with Mayo. The presence of other candidates like Clyde Holloway, Ed Tarpley and Harris Brown would seem to make the task more difficult – and the friction between the Dasher and Abraham camps doesn’t help either.

But that’s inevitable in a crowded field.

Interested in more national news? We've got you covered! See More National News
Previous Article Try Not To Be Shocked, But The Times-Picayune Just Endorsed Mary Landrieu
Next Article Mary Landrieu Is Gettin’ A Visit From Bill Clinton