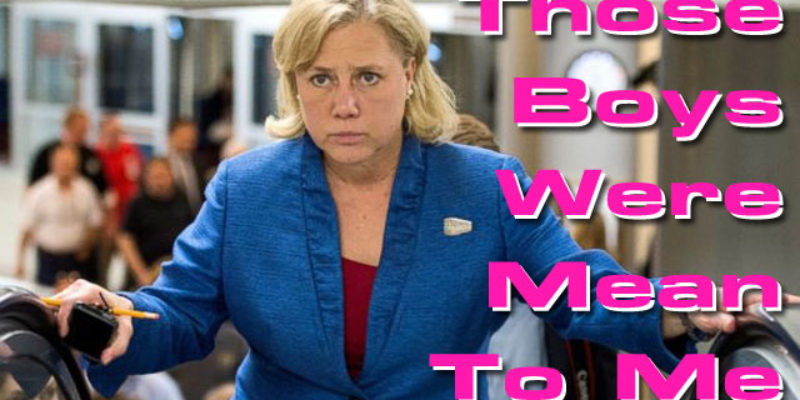 The ad was cut by the Ending Spending Action Fund, which has spent some $16 million on this year’s election cycle and reportedly is dropping over $1 million on this spot in statewide buys. Ending Spending is the brainchild of Joe Ricketts, the founder and former chairman/CEO of TD Ameritrade, and it has emerged as one of the bigger players in the 3rd party/Super PAC game.

It notes that Mary Landrieu has changed over the 8 years she’s been in the Senate and now doesn’t represent Louisiana anymore, touching on Chartergate and the residency stuff. But the fact that the ad does a little age progression by way of showing that Landrieu isn’t as fresh and appealing as she was when she was first elected is just too much for her campaign to handle, so they’re screaming.

“It is appalling that Congressman Cassidy and his allies would illustrate the Senator’s age progression with a leading phrase that Washington has ‘changed’ her,” spokesman Fabien Levy said in a statement.

“This ad is as classless, as it is sexist, and Congressman Cassidy and his allies should remove [it] from television immediately,” he continued. “This is simply another example of our opponents’ desperation and their efforts to detract from the real issues facing Louisiana voters, like raising the minimum wage, safeguarding Social Security, lowering student loan debt, and protecting women in abusive relationships.”

Since it’s a 3rd party ad, it’s of course juvenile to whine to Cassidy about the ad. Cassidy has no control over ads that Super PAC’s run, just like Mary Landrieu had no control over the noxious Patriot Majority ads the unions ran against Cassidy in the primary.

And…sexism? What, that Landrieu hasn’t aged gracefully is somehow out of bounds to point out in a political attack ad?

She’s not in a bikini, for crying out loud.

Landrieu howling sexism, after already playing that card to her detriment in the primary (which prompted several pundits on TV and elsewhere to note that she’s been getting elected by the sexists in Louisiana since 1979), is evidence of what looks like desperation.

The Ending Spending folks loved it.

“The fact that the Landrieu campaign doesn’t even bother to dispute the central claim in the ad — that the Senator violated federal law by billing taxpayers for charter flights so she could attend campaign fundraisers — is further proof of how much Washington, D.C., has changed Mary Landrieu,” he said.

Perhaps Landrieu can play the sexism card to its full conclusion. She perhaps ought to weigh in on #GamerGate, or Dr. Matt Taylor’s shirt, or the Lena Dunham book controversy.

It doesn’t matter what she does now; she’s finished. And if she doesn’t care to maintain any dignity on her way out the door, by all means let’s hear her get her feminist freak on.