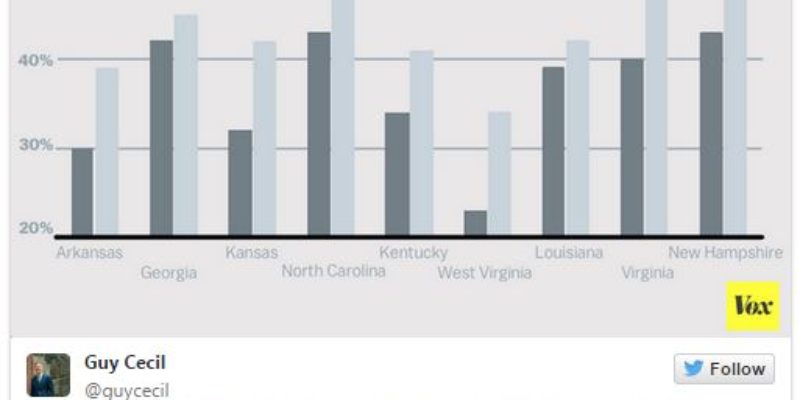 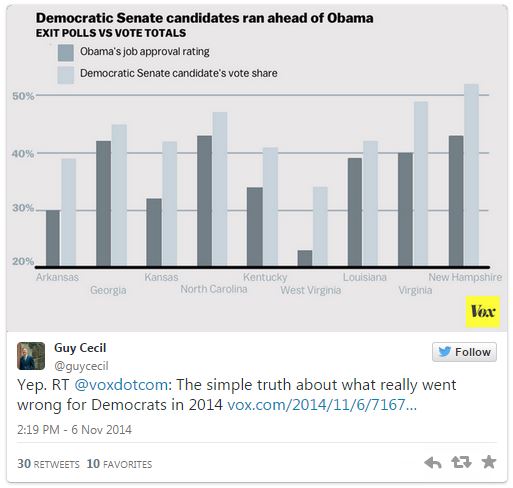 Guy Cecil is the head of the Democrat Senatorial Campaign Committee.

When the head of the Democrat Senatorial Campaign Committee is retweeting a graph showing that President Obama is a millstone around the necks of his Senate candidates – which isn’t a particularly controversial statement; it’s a fact, but an inconvenient and uncomfortable fact if you’re part of Obama’s team – it’s a relatively sizable break from the herd.

That Guy Cecil, who to be sure is probably feeling the heat after not only losing the Senate Tuesday but losing it in numbers enough to suggest the Democrats might not get it back for a fairly long time, would throw Obama under the bus in such a fashion is a good indication that the Democrats no longer find preservation of Obama to be a primary objective.

We are officially in Obama’s Lame Duck period, and for the Democrats it’s now Every Man For Himself.

Get ready for the all-out fight between the Obama faction of the party and the Clinton faction. Interestingly, as Rand Paul so snarkily pointed out earlier this week, Hillary Clinton generated virtually no positive effect for the candidates she stumped for – meaning that there is no particular data which says that the Democrats would fare any better by throwing Obama overboard and re-embracing the Clinton faux-centrist brand by lining up behind a Hillary candidacy.

What you see is the Democrats appearing very much similar to the GOP after its 2006 losses – directionless, leaderless, and in the wilderness with a lame duck president leaving it in shambles.

But while 2006 was a terrible year for the Republicans, at least the party was left with a reserve of talent at the state level. There were still GOP governors and state legislatures from which leadership could develop.

Do the Democrats have that? Perhaps they do, but not at levels they can be comfortable with.

Where are the Democrats who could have broad appeal as presidential candidates or standard bearers? Where is the young talent able to build a governing majority coalition?

Democrats were crushed in gubernatorial races on Tuesday. They managed to take out Tom Corbett in Pennsylvania, who was a dead duck to begin with, but otherwise they were pounded. Martin O’Malley, the outgoing governor of Maryland regarded as a 2016 presidential contender, saw his right-hand man Anthony Brown beaten by a Republican from out of nowhere in one of the bluest states in the country. Democrats lost the governor’s races in Florida, Wisconsin, Ohio and Massachusetts. They barely hung on in Connecticut and Colorado. Democrats suffered catastrophic losses in state legislatures.

Entire swaths of the country are devoid of a Democrat bench from which future elections might be won. The Republicans have lamented the poor shape of their party’s brand; consider what Obama has done to his own party’s brand.

What it means is that since Democrats no longer have a leader to rally around, for the time being their common purpose is likely to be finding someone to blame for their predicament.

That’s going to be Obama.

The question of who can emerge to attempt to rebuild that party might be resolved in favor of the Democrat who can most loudly and completely denounce him. But given how crucial the black community, which still remains unfailing in its loyalty to the president, is to Democrat hopes that seems a tricky proposition indeed.