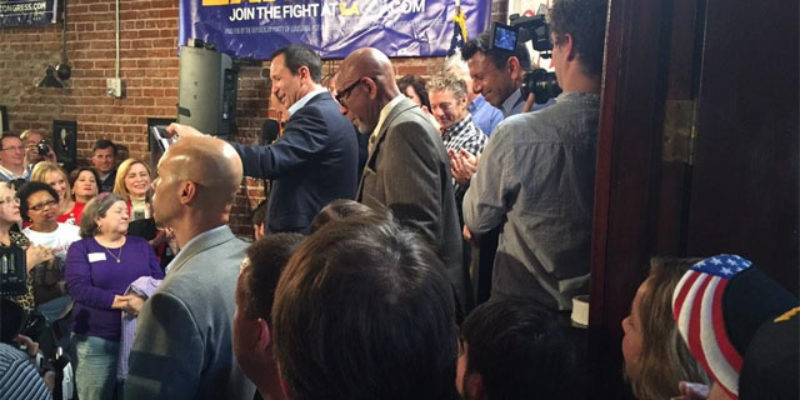 Editor’s Note: A press release from the Louisiana GOP hit some of the highlights from the Bill Cassidy event in downtown Baton Rouge today…

See below for selected quotes as prepared for delivery from today’s rally.

“I’m overwhelmed and grateful for the outpouring of support for our campaign today. People across the state are coming together because they realize that Mary Landrieu no longer represents Louisiana, she represents Barack Obama and his failed polices. Nearly 60 percent of the voters of Louisiana voted for change last Tuesday. I ask everyone to vote one more time on December 6th so we can stand up to both of them for good.”

“It is my honor today to endorse Bill Cassidy for the US Senate! I know Bill will help us to restrain the President’s unlawful agenda. I know Bill will put the Constitution first and I know Bill truly cares about every citizen of Louisiana. His career shows a man who is truly concerned with the general welfare of all and I hope Louisiana will see fit to send him to the US Senate.”

“Let me be clear here and now – Dr. Bill Cassidy has my full support and more importantly my vote on December 6th. After 85,000 miles we got my truck the tune up it needed, and we will hit the road hard for Dr. Cassidy these next 26 days to make sure we finally bring Mary Landrieu home.

“I want to take a minute to speak directly to the more than 200,000 Louisianans who honored me with your vote. Thank you. I am humbled by gift of your most sacred right: your votes. Bill Cassidy has assured me he is going to work hard to earn your votes. I encourage you to meet him, listen to him, study the stark policy differences between Dr. Cassidy and Sen. Landrieu. In the end, I’m confident you will see as I do that he is a man of faith, who loves our country and loves Louisiana. Anything other than a vote for Dr. Bill Cassidy is a victory for Barack Obama and that my friends is not an option. “

“It’s more important now than ever that we elect strong conservatives to the Senate and put an end to the Landrieu/Obama agenda. Obama still has two years left in the White House and we need a strong conservative majority in the Senate to stand up to his dangerous policies. We must elect Bill Cassidy because he’ll represent Louisiana’s best interests, not Barack Obama’s interests.”

“Republicans are united and excited behind Dr. Cassidy and it’s clear we have the momentum on our side during these critical final weeks of the campaign.”