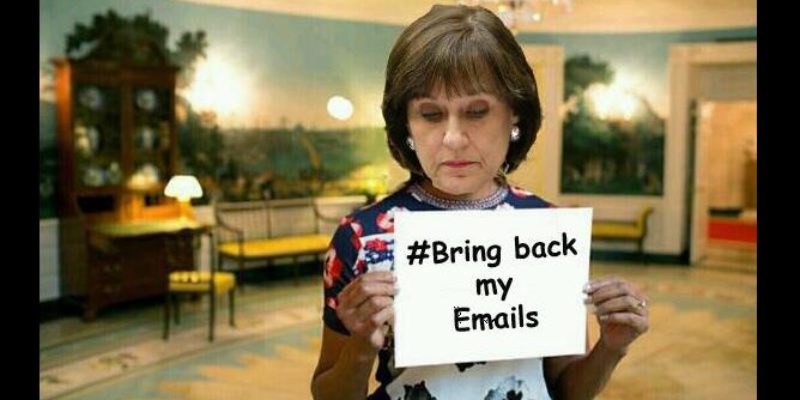 Just when you though things could not get any worse for former Exempt Organizations Unit of the U.S. Internal Revenue Service (IRS) Director Lois Lerner, they do.

Today, Judicial Watch, who has been exposing Lerner’s “lost emails” since the controversy first broke back in January of 2013, released new emails from Lerner, in which she tells IRS Deputy Director Joseph Grant not to visit the IRS’s Cincinnati Office because the agency was in the middle of congress questioning whether or not conservative groups were being targeted.

We just gor an very extensive information request from Imraan [Imraan Khakoo, TE/GE official] –sure looks like op review material. I’m especially concerned that information about pipeline is being asked about … Add to that the fact tha cincinnati is smack dab in the middle of the c4 Congressional inqueries and is about to get a request from TIGTA on all of that, this is NOT a good time to be asking them for anything or to be talking to them about issue in their work. Everyone is stressed to the max and at their wits end, so can we put this off please? [Typos in originals]

It is a visit, not an OP review … I am also interested in the questions Imraan sent to them. Some answers should be readily at hand. Others certainly won’t be … The questions just serve as a framework for a broader conversation about how things are going and what is on our respective minds.

I get that–but timing would be bad if we have to go to Cincy now. So, I will assume we can go
over this here as I get the information I’ve already asked for? Thanks.

I think we are in agreement, but just to be sure. I am planning to go to Cincy at the end of the month. I am travelling with Nan Marks and Imraan.

Fine with me–just trying to keep the stress level manageable in Cincinnati–they are pretty freaked. Please don’t ask them about closures, pipelines, wait time for full development cases, or the c4 application letters. I know Imraan is really interested in that stuff in general—I promise to give him info—that just wouldn’t be the best place to ask. Thanks

The IRS is being investigated for allegations that they targeted conservative and Tea Party groups leading up to the 2012 elections, in order to stifle Republicans getting elected.

Also, Lerner and President Obama claimed that the suggested IRS targeting of conservatives came from “low-level” IRS offices who were managing applications for organizations.

Paz’s allegation about an “uptick in applications from advocacy organizations early in 2010” is contradicted by the May 14, 2013, TIGTA report on the matter, which details that such applications actually declined in 2010 from the prior year.

On the same exact day, Lerner seems to have known that the requests for information from conservative and Tea Party groups was burdensome.

Have we given Cincy new guidance on how they might reduce the burden in the information requests and make it clearer that recipients can ask for extensions? I don’t want any more letters going out on advocacy cases until the letters have been adjusted. Also, I have been telling folks that not all the letters are the same because it depends on the facts. What I’ve seen so far though is identical letters–can you clarify for me please. Thanks

Andy and Justin are working on revising the letter. That should be done soon. In the meantime, Cindy [Cindy Thomas, Director of OE Cincinnati Office] and I discussed having specialists print the relevant parts of since that seemed to be the most burdensome request. We can hold off on sending anymore development letters until we have the revised version.

Still, more “missing emails” from Lerner have yet to be found. It is still not clear what the IRS did with the emails, though Judicial Watch seems to be obtaining them more and more over time.