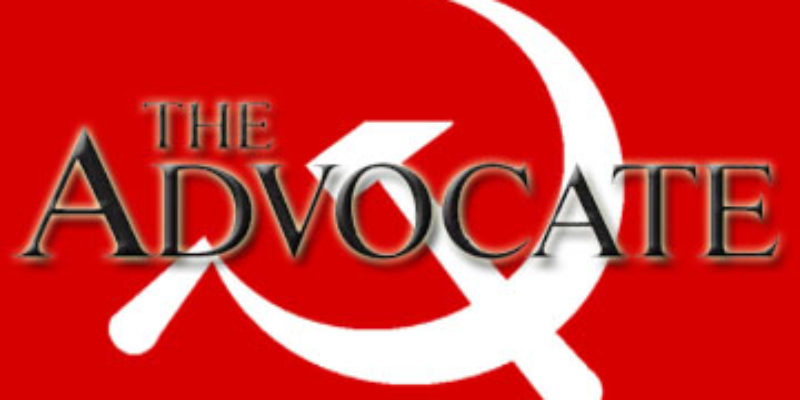 If you didn’t see Jeff Adelson’s story purporting to “debunk” Kenny Knight’s account of Steve Scalise speaking to a civic association rather than a David Duke conference (a story which we admit has long whiskers on it by now) in the Baton Rouge Advocate today, it’s a textbook case of advocacy disguised as journalism.

The story’s lede is that Knight has to be lying about his contention – corroborated by his ex-girlfriend, who as we noted would have personally benefited and earned her 15 minutes of fame had she not done so – that Scalise spoke to the Jefferson Heights Civic Association rather than some David Duke white supremacist conference.

And the contention Adelson’s story makes is a similar one to that put forth by Lamar White that the civic association in question doesn’t exist. White said that was the case because he couldn’t find it in the Secretary of State’s records. Adelson says it didn’t exist because Kenny Lassalle said he’s never heard of it.

While Scalise has never attempted to deny speaking to a meeting of the European-American Unity and Rights Organization — considered a hate group by the Southern Poverty Law Center — many of his supporters have seized on Knight’s statements to make the case that Scalise had been unfairly smeared.

The area that includes Jefferson Heights Avenue, and that encompasses all of what would be its neighborhood association, has always been a part of the Suburban Terrace Civic Association, said Kenny Lassalle, who has been president of the organization since 1999.

“To my knowledge, it’s never existed,” Lassalle said of the neighborhood group Knight claimed to head.

Multiple people familiar with Jefferson Parish’s myriad civic associations, including past presidents of the Civic League of East Jefferson, also have said over the past week that they had never heard of such a group. And the organization does not appear on the parish’s list of neighborhood groups, an informal but lengthy resource on the parish’s website.

As the dustup over Scalise’s appearance became a national story, many commentators argued that Knight’s comments showed there was no truth to White’s initial post.

At the time of the EURO conference, the Suburban Terrace association covered the area near the Mississippi River from Jefferson Playground past Jefferson Heights Avenue. Both Scalise and Knight lived in the area at the time.

Lassalle, the head of the association, had been friendly with Scalise, but the two had a falling-out after Lassalle became a member of the parish’s Democratic Executive Committee, Lassalle said. Though the two are no longer friends, Lassalle said Tuesday that he finds it hard to believe Scalise would knowingly talk to a hate group.

Wait, what was that again?

“but the two had a falling-out after Lassalle became a member of the parish’s Democratic Executive Committee, Lassalle said.”

Right. So we’re now going to take the word of a Democrat political operative who admits to have had a “falling out” with Scalise.

Know who else is on the Democrat PEC in Jefferson?

Gilda Reed, who’s been shopping the story for seven years and finally found somebody who’d run with it in Lamar White.

But there’s more. Lassalle says he’s had interactions with Knight as well, and didn’t like him either…

When one African-American family moved in across the street, Knight used a racial epithet and tried to build support for pressuring the family to leave the neighborhood, Lassalle said.

The point here isn’t that Kenny Knight isn’t a jerk. Of course he’s a jerk. He was David Duke’s campaign manager. Cool people don’t do jobs like that. Nor is it difficult to believe that Lassalle had trouble with Knight in that civic association. He probably did. In fact, it makes Knight’s story of a separate outfit he would have thrown together all the more plausible – the bet here is Knight probably had some spinoff organization made up of a bunch of his friends who lived in the general area that he was trying to make himself the Grand Poo-Bah of, and naturally he wouldn’t have gone through the trouble of formalizing it. And they probably had a few meetings, one of which could have been the one Scalise addressed that day in March 2002, before everybody lost interest – and in all likelihood they’d have lost interest in Knight as the leader most of all.

Twelve years after the fact, nobody is going to have a reliable recollection of any of this. As we said earlier this week, though, you pretty much have to be a partisan Democrat to believe  the story of Scalise speaking to some local civic group, however formal, represents some cover story for Scalise who is actually a big pal of the David Duke crowd on the downlow – and that bias looks pretty clear in reading Adelson’s Advocate piece.

Wouldn’t you think that if your source for “Jefferson Heights Civic Association doesn’t exist” was a guy on the Democrat PEC in Jefferson you’d disclose that fact in the lede?

While Scalise has never attempted to deny speaking to a meeting of the European-American Unity and Rights Organization — considered a hate group by the Southern Poverty Law Center — many of his supporters have seized on Knight’s statements to make the case that Scalise had been unfairly smeared.

The area that includes Jefferson Heights Avenue, and that encompasses all of what would be its neighborhood association, has always been a part of the Suburban Terrace Civic Association, said Kenny Lassalle, that organization’s president since 1999 and a Democrat Parish Executive Committee member representing the area.

But it’s amazing how doggedly we get the Democrat narrative. Knight is to be taken as a liar and a hack, despite the fact his story was corroborated by Barbara Noble, but the elected local Democrat pol is put forth as a pristine source even when he admits he and Scalise are on bad terms.

Our friend Ellen Carmichael did a terrific job at the Daily Caller outlining what a smear this whole story is against Scalise, something that has risen to such a level that the White House press secretary and ignominious crapweasel Josh Earnest participated in it earlier this week by essentially calling Scalise David Duke without the hood, and lamenting how slanted journalism like this goes completely unpunished…

In what was apparently a good faith effort to be transparent, Scalise’s congressional office immediately (and erroneously) acknowledged he appeared at the conference but insisted that the then-state representative did not know he was speaking to white nationalists. David Duke, who granted an interview to the Washington Post, conceded that he did not know if Scalise was even aware that he was affiliated with the event. Knight went a step further, emphatically guaranteeing that not only was Scalise unaware of the EURO Conference taking place later in the day (this seems to be substantiated by EURO’s press releasefor the conference), but also that he had never had any conversations with Scalise about matters of race or any of EURO’s other interests.

This jives with pretty much everything that was known about Scalise prior to the discovery of that 2002 town hall. Longtime friends and colleagues quickly and publicly defended him as a man of character, and all were dumbfounded that anyone could possibly assume that the grandson of Sicilian immigrants and a fervent Catholic would ever consider aligning himself with individuals who so deeply loathe everything he is.

But for many in the media, this did not seem to matter. They had made up their minds about Scalise, about Louisiana and about the membership of the Republican Party. They did not listen to those who understood the state, who tried time and time again to explain that David Duke was persona non grata in Louisiana and that Scalise would have no reason to kiss his ring. They continued to write absurd headlines, like “Republicans Try to Fix Damage Scalise’s 2002 Speech Could Do in 2016,” “Louisiana’s Long History of Racism: Why Steve Scalise Spoke to a White Nationalist Hate Group” and “Steve Scalise’s David Duke Scandal Says More About Republicans Than the Party Will Ever Admit.”

Yes, there are many fine journalists who seek to understand context, represent quotes from sources accurately and who would rather get the story right than get it first. But, conservatives are still right to complain of media bias. It is real, and it sadly shapes the public’s opinion of our candidates and our positions. It is the same practice that signals to the American people not to pay any mind to the failings of the Left’s heroes – from President Bill Clinton’s perjury to the Rev. Al Sharpton’s tax dodging to the late Sen. Robert Byrd’s tenure as an actual klansman. They shrug it off as conservative paranoia, instead content to mock the concerns of well-meaning people who seek answers on Jonathan Gruber, Benghazi (their favorite plaything) or the IRS targeting of center-right organizations.

But, perhaps it lurks where we don’t often look– in the confirmation biases of those who fail to even try to understand the very people for whom they mean to write. Or perhaps they don’t mean to write for them, anyway. Why bother when they could just write for those who already agree with what they’re going to say?

We found this at the Jefferson Democrat PEC’s Facebook page, by the way…

Who’s that? Gilda Reed and Lamar White, of course. Cozy as can be.

Adelson never bothered to address the fact that the EURO website had an article previewing the conference in question which didn’t contain Scalise’s name. The article said this…

EURO Holds Workshop to Train Future Civil Rights ActivistsNew Orleans, Louisiana, May 16, 2002 … The European-American Unity and Rights Organization (EURO) will hold a workshop on May 17-18 in Metairie, Louisiana, to train future civil rights activists. The event titled the “2002 EURO Workshop on Civil Rights” will teach effective methods of activism to our local, state and regional leaders and coordinators. EURO National President David Duke will speak via teleconference from the International Conference on Human Rights in Moscow, Russia, to both groups. Also scheduled to speak will be EURO Louisiana State Representative Kenny Knight, EURO National Director Vincent Breeding and EURO California State President Stan Hess.For more information please contact EURO National Director Vincent Breeding at 985-626-7714 or at [email protected]whitecivilrights.com.The European-American Unity and Rights Organization (EURO) is America’s leading organization fighting against discrimination and for the rights and heritage of European Americans.”

A question: wouldn’t you think a crappy, downtrodden outfit like EURO would want to make a big deal about getting an elected official to speak at their conference? Even a state representative would seem to be a big deal, no? One would think that would be something they’d shout from the rooftops.

And here’s something else. Adelson mentioned the Southern Poverty Law Center and how they identify EURO as a hate group. So happens SPLC has a page on EURO. On that page is a lengthy history of its operations going back to 2000, and there is no mention whatsoever of EURO getting any elected officials to speak at its conferences.

Wouldn’t you think SPLC would have made a big deal about shaming Steve Scalise at the time for speaking at the EURO conference if he was going to do so? Were they slipping back in 2002?

This is a narrative that only adds up if you’re on the same team as Gilda Reed and Lamar White. Seems as though they’ve got Jeff Adelson and the Advocate on their team.