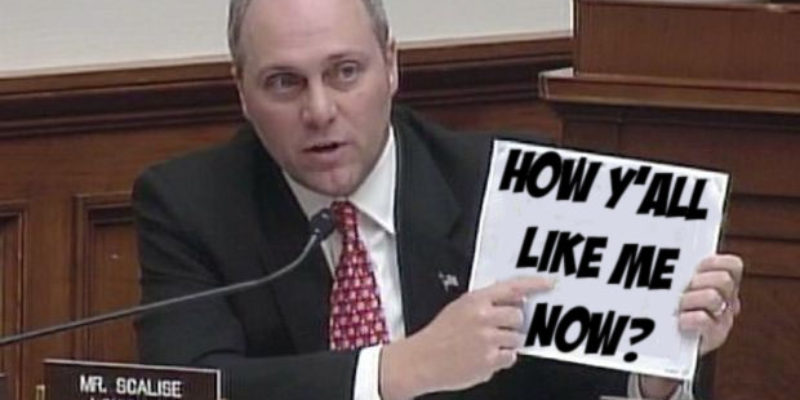 While the mainstream media hasn’t exactly pulled hamstrings running away from the story, by now it’s fairly obvious that the “scandal” surrounding “revelations” that House Majority Whip Steve Scalise “spoke” to a “white supremacist group” 12 years ago has more or less run its course and been found inaccurate.

As we said it was. Scalise gave a speech to the Jefferson Heights Civic Association the morning before a conference of some David Duke-affiliated white power group was to use the same venue. Scalise, 12 years on, had no idea what his accusers were talking about and therefore took a safe approach and offered a pre-emptive apology for any wrongdoing he may have unwittingly committed, and meanwhile actual journalists uncovered the fact that the president of the Jefferson Heights Civic Association, who was a one-time functionary for Duke and had secured the venue for both Scalise’s speech and the white power group, denied Scalise had addressed the Klanbake.

Thus making liars and fools out of those who pushed the scandal. Rather than a “Wow, we got this wrong and we’re sorry,” you’ll just see this thing melt away other than the occasional reference to Scalise’s “ties to white supremacists” which don’t actually exist.

Not that the de-bunking of his “scoop” particularly discredited our friend Lamar White with the local media. Yesterday, the Baton Rouge Advocate published a sycophantic, hagiographic puff piece for the ages about him, his physical condition and tragic family history and his political brilliance. Three sources were used for the story – one is a family friend and two others work at the Lafayette Independent, which publishes his work from time to time.

“He has a sort of selfless bravery, I guess you would say, in that he really isn’t worried about anybody,” said Walter Pierce, editor of the Lafayette alternative news site The Ind.com, which publishes a monthly newspaper.

No critical voices were used in the piece, there was no mention of White’s political activism and connections with the Louisiana Democrat Party, whose chair published a piece at White’s website blaming “right-wing echo chambers” for the electoral demise of that party last month, and there was no mention of the fact that White’s post about Scalise addressing the white power group has been proven false.

This, a full two days after the initial reporting de-bunking White’s accusations, and a day after the Advocate’s editors and columnist Quin Hillyer had both defended Scalise in the paper’s pages. It was a shockingly poor performance and an abdication of the Advocate’s responsibility to inform its readers.

Not that the Times-Picayune is any better. Yesterday afternoon saw an article posted to NOLA.com screaming that Kenny Knight, the event organizer in question, had ties “closer than he disclosed” to David Duke. As if that’s something which matters; Kenny Knight had already admitted he was the person who booked the venue for Duke’s white-power conference. What more do you need to know about whether he was a Duke affiliate? It was a patent attempt at keeping the story alive without any new information of any substantial value.

And of course, it’s justified because Scalise has “already apologized” for “speaking to the white nationalist group.” The apology is, of course, a non-sequitur; an apology is what you could expect from a decent and prudent man who had no recollection of such a speech and was mortified at the possibility of having done so in error. But since he’s offered an apology, that is being taken as proof the “scandal” has basis in reality when it is clear there is none.

That White’s fabulist Scalise-as-Klan-sympathizer story would turn out in similar fashion to the Rolling Stone UVA rape case story isn’t a surprise; we already know that the Left deals fairly exclusively in lies and calumnies these days – from Hands Up, Don’t Shoot to the Gruberization of Obamacare to runaway campus rape and on down the line, all these people seem to have is a string of false narratives. That goes double for the Democrats in Louisiana, who have nothing whatsoever to offer where policy is concerned and have been rejected outright by a large majority of voters in the state.

Nationally, it appears the Left isn’t as interested in using the Scalise “scandal” as some on the Right have been – which is a real problem for Scalise going forward as the Majority Whip. Scalise getting elected to his current leadership position in the House was supposed to be an indication of rising conservative power within the body, but no sooner did he land in that job than he was being criticized for carrying water for Speaker John Boehner. Scalise whipping votes for the Cromnibus bill, for example, is “red-letter proof” that he’s one of the bad guys, and because of that the “scandal” is now a crucible for Republican presidential candidates like Jeb Bush.

The opportunism is as predictable as everything else about this story, but it’s plentiful.

Of course there is Duke himself, who earlier this week publicly threatened the GOP leadership that if they didn’t back Scalise he’d start naming names of other Republican politicians with whom he’s done business. This is, of course, a bluff – and an easily recognizable bluff at that, since Duke waited until after Boehner and House Majority Leader Kevin McCarthy had both issued statements supporting Scalise. Thus there was no danger that anyone would take Duke up on his threat and force him to show his hand, and since the leadership did back Scalise Duke can now claim that it was his threat backed by the “goods” he has on them that forced them to do so.

And Duke has also now attached himself to Scalise by “protecting” him in such a manner, which could well set off a fresh flurry of hostile media investigations into the ties Scalise has to Duke – complete with, we’re certain, a forthcoming list of all the people who have donated both to Scalise’s campaigns over the years and to Duke’s. If you fit that profile, your 15 minutes of fame is coming and you won’t enjoy it.

Don’t think that Boehner won’t seize on this as an opportunity as well. Scalise’s “scandal” has cost him some bad publicity, earned or not, and as a result Boehner will now extract from Scalise a program of unbending loyalty. That puts Scalise in a difficult position, because as Whip his selling point was supposed to be that he would be able to influence the leadership to become more combative with the White House and push a stronger conservative agenda. It’s going to be harder to exercise independence against the Chamber of Commerce/Moderate/Squish agenda when he’s “damaged” by this “scandal;” Boehner can and probably will approach Scalise on the basis of “I own you now.”

Scalise’s response could be to publicly distance himself from Boehner and oppose the Speaker on an issue of importance to conservatives, but to do so would likely lead to his ouster as Whip. And that ouster would be reported as a result of Scalise’s “ties to white supremacists,” which could even further damage the conservative cause.

It remains to be seen how this will play out, but the facts that have emerged highlight how silly the whole controversy is. Politicians address all kinds of organizations; their staffers–at the time, Scalise had a single aide–line up engagements for them. It is conceivable that Scalise could have been scheduled to give a talk on a local tax proposal to a group that turned out to be unsavory, but so what? That is akin to President Obama having his photograph taken with a convicted child molester. It makes for a fun “gotcha,” but doesn’t tell us anything about Scalise or Obama. No one claims that Scalise was a member of EURO or has ever expressed any “white supremacist” views; in fact, any such claim would be as absurd as the assertion that Obama approves of child molestation.

It is no surprise that Democrats in Congress and the media, reeling from November’s election, tried to make a major story out of Scalise’s 2002 speech. It is more concerning, in my view, that some conservatives have seized on the story to attack John Boehner. The next two years are shaping up as a critical time for conservatives, and the last thing we need is a circular firing squad.

One does have to give White and the two clowns who fed him the bogus story about Scalise’s EURO speech some credit; they certainly managed to parlay a lie into a mess for their enemies. Of course, what goes around comes around.

Interested in more news from Louisiana? We've got you covered! See More Louisiana News
Previous Article Karen Carter Peterson, Dems Had A Dismal Year And Don’t Seem To Be Getting Better Anytime Soon
Next Article SADOW: If You Want To Eliminate Those Tax Breaks, Consider Relief On Tax Rates