There are 4 candidates in the race to fill Rep. Hunter Greene seat who was elected Family Court judge. Three Republicans are in the race, Councilman Buddy Amoroso, attorney Rick Bond, former Metro Councilman Darrell Ourso, along with Independent candidate, Susan Nelson, an attorney and political consultant who was formerly the communications director for the Louisiana Democrat Party. The special election is scheduled for this Saturday (Feb. 21), with a runoff in March if necessary.

According to Nola.com “with less than a week to go before Amoroso and three other contenders face off in a special election for the Louisiana House of Representatives’ District 66 seat in Baton Rouge, Amoroso has the lead in financial contributions.” “Amoroso and Bond have shared multiple endorsements, including from the Louisiana Association of Business and Industry’s political action committee EASTPAC, as well as oil and gas and building industry endorsements. Amoroso also picked up the endorsement of the Republican Party of East Baton Rouge Parish.”

Ourso states on his website that “The critical needs of District 66 will be my immediate priority in the Legislature.  Economic development and sustainable growth will continue to be a focus in South and Southeast Baton Rouge. With that, transportation and infrastructure needs must be met in order to provide adequate support for continued business growth!”

“Nelson is the sole Independent in the race. Because of that, she’s been left out of some forums and campaign events that catered only to Republicans.

She said she’s taken that as an opportunity to focus on knocking on doors. Making personal connections is crucial to getting voters out to the polls on Saturday, she said, particularly since it’s expected to be a very low turnout election.

“If we have 15 percent come out that’s going to be amazing,” Nelson said. “We’re looking at 3,000 or 4,000 voters coming out. So I’ve focused knocking on doors and reaching out to folks directly and asking them to vote.”

Early voting numbers give an indication of just how low the turnout will be. According to the Louisiana Secretary of State’s office, only 704 people voted in early voting for the race, out of 30,744 who were eligible.” nola.com

If you are interested in hearing from the candidates – or, at least, the thre Republicans, in the Special Election for State Rep District 66 then be sure to attend The “Ole Fashioned Stump” event held by the Capital City Republican Women Wednesday Feb, 18th. It is always a great event. 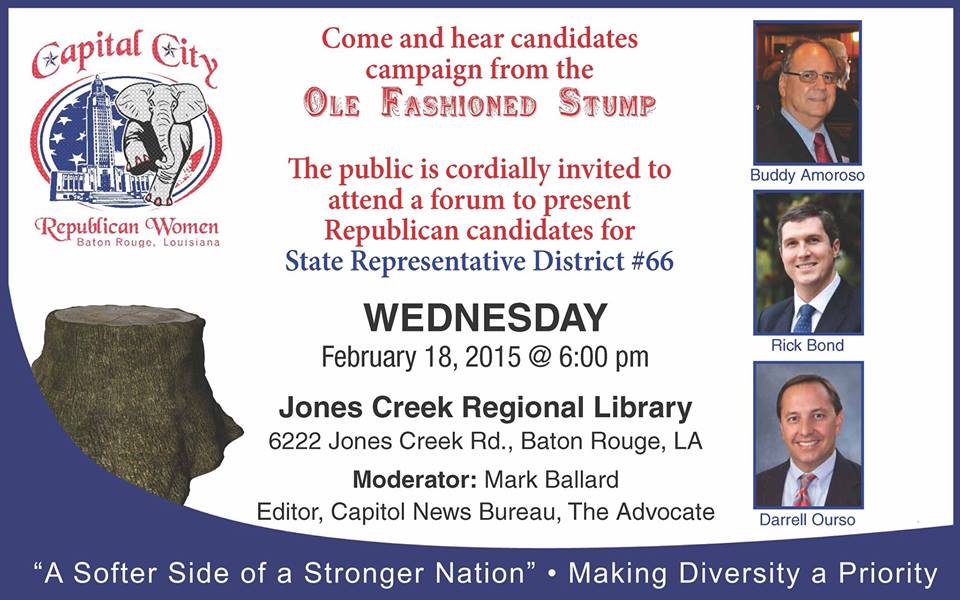