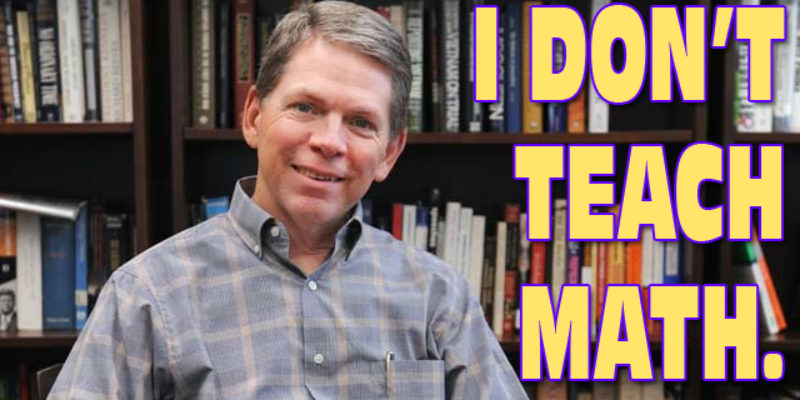 At NOLA.com just this afternoon is one of the more dishonest and ridiculous abuses of a newspaper’s editorial space you’ll ever see.

It’s a follow-up to a piece that long-time state Democrat shill and current LSU professor Bob Mann wrote last week demanding that the entire appointed LSU Board of Supervisors resign because the cuts LSU has endured and is about to endure will destroy the university and the Board members aren’t doing anything about it.

Today, Mann goes after a particular member of that board – Baton Rouge Business Report publisher Rolfe McCollister. He does so because McCollister has been not only a political ally of the current governor Bobby Jindal, and Mann accuses McCollister of choosing that loyalty over LSU’s best interests without much evidentiary basis, but also because McCollister was on the Board of Supervisors 23 years ago when Edwin Edwards was engaged in slashing LSU’s budget to the bone.

At the time, McCollister demanded Edwards be arrested for de-prioritizing higher education and accused the governor of lying when he said state law forced budget cuts to higher education. Mann says McCollister has changed his tune, because McCollister’s editorial at the Business Report earlier this month said the following…

Too many of the voices we have heard recently—especially from the news media—sound like Chicken Little. Let me predict here and now, the world will not end for Louisiana or higher education during the upcoming session of the Legislature. Solutions will be found. The fact is, as you see below in the list of recent good economic news, much of the world here does not revolve around or depend on the Legislature. Business is strong in Louisiana and getting even better (the energy industry being an exception due to the current low price of oil). I hear from many company CEOs who had a record year and look to grow and expand in 2015

Many of these companies weathered the recession and did more with less, so they are not sympathetic to government or higher education having to do the same thing. And they are not interested in paying more taxes to bail out anyone.

Mann omitted quoting the italicized portion, apparently because it didn’t suit his narrative. As a Chicken Little running around screaming for resignations of Jindal and all his Board of Supervisors appointees, it won’t do to have someone point out that business isn’t interested in paying more taxes to grow government – something McCollister is considerably more qualified to opine on than Mann is. And clearly the editorial staff at the Times-Picayune doesn’t provide a whole lot of adult supervision to its columnists.

What else doesn’t suit Mann’s narrative? We’ll focus on the fact that 1993 and 2015 could hardly be different years where LSU’s fortunes are concerned.

I was in school at LSU in 1993, and I remember very well what Edwin Edwards did to the university. Not only did LSU get hit with massive budget cuts, the politicians at the Capitol were loath to allow the university to raise its prices to offset them. LSU’s tuition went from $2,173 for in-state students in 1993 to $2,625 in 1994; that was it. In other words, LSU was starved by the Edwards administration and not allowed to escape the budget pain through its own efforts at market participation. At that time, LSU was greatly dependent on cash from the general fund for its survival – far more so than today.

You’ve heard over and over again that LSU’s funding has dropped off the table since 2008, right? That was, of course, the year Louisiana’s state budget was some $30 billion thanks to the massive Katrina recovery bubble, crude oil prices well over $100 a barrel and a strong national economy that would shortly fall into recession. Well, LSU’s 2008-09 budget that year was $425 million.

All you’ve heard for the last six years is that LSU has been gutted by the Jindal administration and the governor and his appointees on the BOS ought to hang themselves from the rafters at the Pete Maravich Assembly Center for all the damage they’ve done. And yet LSU has $30 million more coming in this year than it had in the fat years.

Now, the state general fund revenue to the school has dropped from $235 million to $108 million, but LSU’s self-generated revenues have gone from $190 million to $347 million.

That’s a success story. That’s LSU moving away from the bad old days, when the university was dependent on the whims and “competence” of the legislative and executive branches for political money, and toward a time when it is truly independent of politics.

Now, there’s a good deal more accountability involved in running your university on self-generated funds. You have to treat your students as consumers and you have to provide them with a good educational product. You also have to price your product to maximize revenue and enrollment, and you have to attract students who will graduate – you want them paying tuition for the full time in school and not just for a year or two before they flunk out. And you also need to manage your costs and run a tight ship. Paying people like Bob Mann $128,000 per year to teach two courses per semester, for example, isn’t the kind of management that will sell well to parents who pay a full ride for their kid’s college education at LSU – even if that ride is subsidized by the TOPS program. If the parents get disgusted with how LSU spends its money they can send their kids to Louisiana Tech or UL-Lafayette or Southern or UNO or wherever else, so you’ve got to watch out for people getting the idea you’re abusing your funding.

When you depend on political money, it’s easier – unless the price of oil goes down, that is. Nobody particularly cares whether you keep your costs down, because the people doing the budgeting aren’t spending their own money. And you don’t have to provide a good product people want, you just have to be a bully to the politicians. When you’re going for political money, Bob Mann isn’t a liability for only teaching two courses a semester for that $128,000, he’s an asset for writing a column every week pressuring politicians and others with influence to siphon general fund money to the university.

Mann calls that “journalism,” and when we filed a public records request last week seeking to get information about his job description and how much political activity he’s engaged in on the taxpayers’ dime he put out a message on social media snarking that we were going after him for “committing journalism” at LSU’s Journalism School.

The point is, this isn’t journalism by any recognizable standard. It’s propaganda and political activism, and it’s being practiced with dollars coerced out of the pockets of taxpayers.

Which is the entire project Mann and his uber-boss F. King Alexander are engaged in. They want the political money rather than what the market will provide, and they’re willing to break the bones of Jindal and his political allies to get it. What they’re missing, though, is that the university they work for is on the road to complete budget independence and immunity from the vagaries of the governor and the state legislature. If they were less wedded to politics as a means of making LSU great – and getting the politics out of LSU’s pursuit for greatness is legitimately possible now in ways that it wasn’t in 1993 – there would be a lot less bitching and histrionics and a lot more productive discussion.

It almost makes you think that maybe the problem at LSU isn’t the dead presidents, or scarcity thereof, but rather the live leaders and the attitudes they display.