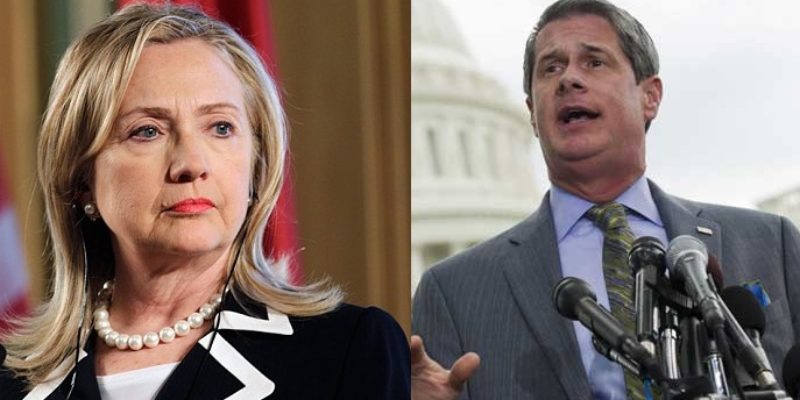 Vitter is pushing the U.S. State Department to turn over Clinton’s records from her private email domain related to the State Department’s decision against designating Boko Haram as a Foreign Terrorist Organization (FTO).

“Hillary Clinton has flat out admitted to deleting thousands of emails from her personal domain – records that could very well be tied to her role as Secretary of State,” Vitter said in a statement. “She  has misled Congress in official reports before, and we need to make sure she isn’t hiding any of these records now.”

Previously, Vitter has questioned Clinton’s ties to foreign donors including a major Nigerian land developer, Gilbert Chagoury and whether he had any influence over the decision against designating Boko Haram an FTO.

The decision against designating Boko Haram was made between 2011 and 2013, while Clinton was in office.

Vitter has long been concerned about conflicts of interest between Clinton, the Clinton Foundation and her position as Secretary of State.

Vitter has advocated against foreign donations to the Clinton Foundation since 2009 and voted against Clinton’s nomination to serve as Secretary of State, largely in part because of the conflict of interest with the Foundation and the donations it accepts.

Most recently, evidence emerged that Clinton Foundation employees working for the State Department were directly involved in the non-designation for the two years the Department refused to make the designation, despite evidence by U.S. intelligence clearly stating Boko Haram was engaged in terrorist activity against Western and U.S. nationals.

Here is the full letter Vitter sent to Kerry:

Like many Americans, I am incredibly concerned about the recent revelations that former Secretary of State Hillary Clinton has kept official federal records hidden from the public, both through an external email domain and in deciding to delete thousands of these records. While the State Department is in the process of reviewing the documents Secretary Clinton has provided, I am requesting that the Department provide all additional files specifically relating to the designation of Boko Haram as a terrorist organization during former Secretary Clinton’s term and seek out any related files which may not have already been turned over by Secretary Clinton.

As I have in the past, I commend your November 2013 decision to designate Boko Haram as a Foreign Terrorist Organization. However, given the drastic foothold Boko Haram was allowed to gain prior to being designated an FTO, thenexus between the Department’s decision against designating Boko Haram as an FTO and connections to outside groups should be brought forward. Associated records should have been preserved as evidence of the agency’s activities, decisions and procedures. These should be presented to the relevant committees and to the American public to be evaluated for corresponding misconduct.

Last year, I presented the Department with evidence that multiple State Department Country Reports on Terrorism, presented to Congress under Secretary Clinton’s direction, failed to include valuable information related to Boko Haram. Inaccuracies within official documents make it clear that the State Department misled Congress and the American people. Additional evidence demonstrates that multiple Department employees who were directly involved in the decision against designating Boko Haram as an FTO, including the Office Coordinator for Counterterrorism, have been Clinton Foundation employees. Disturbingly, while the Department was refusing to make the FTO designation, former President Bill Clinton, also the head of the Clinton Foundation and account owner of the Clinton email domain, participated in events with a long-time donor and major Nigerian land developer, Gilbert Chagoury, who previously agreed to a $66 million plea deal during international investigation into corruption charges against him. We need to know if Mr. Chagoury had any influence in the decision not to designate Boko Haram an FTO, or had any other influence with Sec. Clinton’s foreign policy decisions.

Between this history of involvement and the recent revelations regarding Secretary Clinton’s record keeping, I strongly believe it is essential to re-establish trust in the Department to provide the related materials to the public. If funds from the Clinton Foundation were used to pay for the email server, it would constitute a financial benefit from the Clinton Foundation and donations from foreign businessmen who directly stood to gain from Clinton’s decision, which is questionable at best.

I have long opposed the foreign donations to the Clinton Foundation as a conflict of interest for Secretary Clinton due to the nature of the job. Moreover, as you are aware, the Code of Federal Regulations requires federal agencies to make and preserve records that duly document agency activity. Former Secretary Clinton’s actions in conjunction to information I have previously presented to the Department where she circumvented and misled Congress should be closely examined.

The purpose of the law is to ensure that agency activities are available to be reviewed when needed — such as for FOIA requests or congressional inquiries. Each federal agency is responsible for maintaining its records in accordance with regulations. Due to the highly unusual nature of the current circumstance, I am asking you to demonstrate the Department’s commitment to transparency and to provide all files related to their decision not to designate Boko Haram an FTO, and all communication with Mr. Chagoury or his affiliated businesses.

These actions, if true, run contrary to the trust placed in the Department, as a representative of the United States and constitutional government. It is imperative to fully disclose relevant information to the American public.