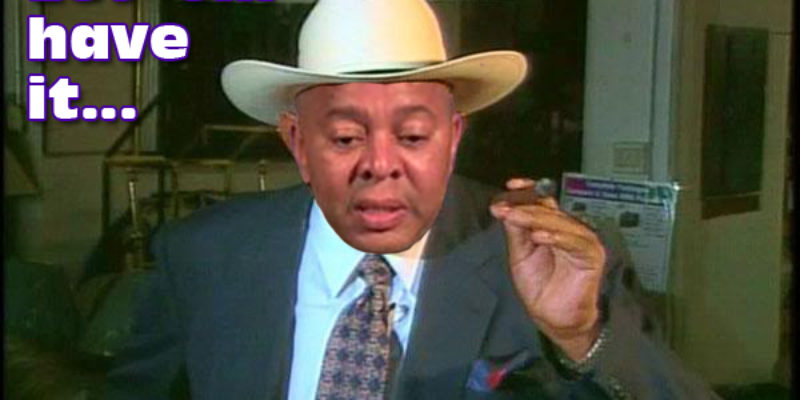 …because our fearless leader around here has gone ballistic over that choke-job in Pittsburgh last night.

Y’all might remember that MacAoidh was not a fan of Johnny Jones gettin’ hired. Before it happened he said there was no way Joe Alleva would let Collis Temple and the BBQ bunch left over from Dale Brown’s days coachin’ hoops make him hire an 18-14 coach from North Texas State, because to make a hire like that would put Alleva in a position to catch hell from whoever the new school president was gonna be.

And when that hire was made he gave Jones congratulations but beat up on the good ol’ boy BBQ bunch for an unprofessional hire that looks more like Cow Town U. than some school with a hunnert-million dollar athletic program.

Plus, after Jones’ first year when everybody was all hopped up about how LSU didn’t completely suck MacAoidh said he wasn’t too impressed.

Somethin’ interesting he said after that first year…

But Jones’ game management wasn’t great this year, either. We noticed, as did lots of other people, that Jones simply won’t call time out to put a stop to an opponent’s momentum during a game; he tries to wait for the TV timeouts. And that played a role in a few games this year; LSU would begin clicking offensively and cause havoc with its pressure defense and build a bit of a lead, but then opposing coaches would counter with a time out and blunt LSU’s momentum. And once LSU petered out and the opponent’s run began, there was very little coming from the sideline to stop it.

The results were painful to watch. Ole Miss went on a 30-9 run to key a blowout in Baton Rouge in the season finale which proved devastating to the team’s postseason hopes. Georgia cut a 20-point halftime lead down to two points before Stringer hit a key 3-pointer to ice a first-round SEC Tournament win. And so on.

LSU had moments where it was clear the team’s athleticism and style of play was going to cause trouble for its opponents. But they were only moments. Sustaining quality play was never something this team showed itself capable of doing. Maybe that’s a function of talent level; maybe not. But the game management and the time out management in particular definitely looked like a factor.

Jones had a 16-point lead goin’ in the second half of last night’s game and watched NC State eat it up at the end. And he never really did call a time out to change the momentum.

In fact, at the end LSU still had three time outs left. Not one, not two, but three. They give you five to use at the beginning of the game. NC State called all of theirs.

And the choke-job came from missin’ a dozen straight shots from the floor and six at the foul line. Some excerpts from the play-by-play report at the end of the game…

What you ought to notice from that are a number of things. First, only one time out from LSU. That came with 5:32, after NC State had cut the lead from 62-48 to 62-55, and none from that point to the end of the game.

An’ like I said, they had three time outs left when the buzzer went off. Jones just sat there.

You’ll also notice the guys missin’ those shots. Between missed baskets and free throws, Mickey missed seven of ’em, Martin missed three (though he did sink four free throws in that time), Quarterman missed three (he did hit a free throw) and Hornsby missed two. Patterson missed a three-pointer and Gray missed a pair of layups amidst the trees.

What’s significant about that? Well, Martin played 40 minutes last night and Quarterman played 39. Mickey played 38, and earlier in the week they let it out that his play has been fallin’ off because he gets tired easy on account of he’s got an iron deficiency. And Hornsby played 36 minutes.

So the guys who missed 15 of the 18 missed shots in the last nine minutes and change of that game were guys who basically never left the floor in the middle of a high-intensity, physical game anybody would be dead tired from playing in.

In fact, Jones had his starters play 185 of the 200 minutes in the game. He let Darcy Malone play two whole minutes off the bench, and Gray played 13. Brian Bridgewater, the other cat who gets to play in most games, didn’t get off the bench.

You ain’t gonna find a team in the NCAA tournament this year, or pretty much any other year, what plays its starters 92.5 percent of the minutes in the game. NC State played its backups 42 minutes last night. Georgia State, who upset Baylor and blew my bracket all to hell, got 41 minutes out of its backups (Baylor got 42 minutes off its bench). UAB knocked off Iowa State with 67 minutes from the bench (Iowa State had the subs in for 47 minutes). Even little Northeastern, who played Notre Dame within four points of knockin’ ’em off an’ completely destroyin’ everybody’s bracket, got 31 minutes – twice as much as LSU – off its bench (Notre Dame only got 18, so that’s at least close to LSU, and guess what? They were up 10 with 4:55 left and almost fell apart late with a bunch of tired starters).

Point is, you gotta keep your starters fresh.

Even if your subs are scrubs, you can get ’em on the floor for a couple of minutes at a time in small doses and play 4-on-5 so a Mickey or Martin or Quarterman or Hornsby can get a break. It’s doable. Three or four minutes of Bridgewater or Malone bein’ out there when you’re up 16 points doesn’t kill you, and you reap the benefits at the end of the game when Mickey gets fouled an’ he doesn’t have dead legs he’s trying to shoot with.

I ain’t a big basketball guru. I mean, look at me. But this is common-sense stuff. In the Barataria Nutria League we have coaches if for no other reason than to figure out how to organize how the playin’ time breaks down and when to call a time out so’s the guys can rest.

LSU’s payin’ two mil a year for a coach who don’t know how to do that?

Here’s what I’m worried about. When I first started carin’ about LSU basketball was when Shaq got recruited, an’ at the time he came on the roster LSU also had Chris Jackson, who now goes by some Al Qaeda name that I don’t wanna talk about, and Stanley Roberts. Plus Vernel Singleton, Wayne Sims, Maurice Williamson, Harold Boudreaux and Randy Devall, who, as role players go, were sick-good. That was a national championship team, fa sho. They had talent like you wouldn’t believe.

Except they got put out of the Dance in the second round by Georgia Tech. Who had a bunch of NBA dudes in their own right – Kenny Anderson, Dennis Scott and Brian Oliver ALL averaged over 20 a game for that team. It wasn’t an upset they lost to Georgia Tech. The problem was that with all that talent LSU was only a 5-seed in the tournament, because they crapped away a buncha games they never shoulda lost.

Jones next year is gonna have a team kinda like that Shaq-Stanley-CJ team. He’s got Ben Simmons comin’ in, who’s the top recruit in the country. Antonio Blakeney, who’s like the #14 player in the country, is committed. And Malik Newman, who is #3, is supposedly leaning to LSU right now. Plus he’s got Craig Victor, who comes eligible next year after transferrin’ from Arizona, is a former Top 50 recruit, and he’s bringin’ back Gray, Patterson, Hornsby, Quarterman and – at this point you gotta think – Mickey, who can’t possibly go pro after bein’ The Goat Of All Goats last night.

That team’s loaded. But after watchin’ Jones coach I gotta think they’ll find a way to lose a good half a dozen games they got no business losin’, plus you’re gonna get beat playin’ Kentucky and there’s always gonna be some other team who’s just a little better.

You’re a 5-seed. And by the time you’re in the Round Of 32, you’re an underdog. Meaning, it’s no surprise if you get bounced out of the tournament.

The thing about the Shaq-Stanley-CJ team was that after that year was over Stanley and CJ went pro, and LSU never had the supportin’ cast around Shaq again. They faded for three years, makin’ the tournament but not doin’ much when in it, and then Brown went down the tubes. And the thing about next year’s team is that it’s pretty likely it’ll be completely disbanded after that one year. Simmons is off to the NBA fa sho, Blakeney and Newman are considered one-and-dones as well, if you can keep Mickey to next year you won’t keep him beyond it, and Gray and Hornsby are seniors, plus there are people sayin’ that with one more year Quarterman is an NBA guy. So that means you go from havin’ a scary-good team to havin’ Patterson, Victor, those guys on this year’s team’s bench Jones is terrified to play and whatever else he can scare up next year in recruitin’.

An’ he’s a good recruiter, but when the word’s out he can’t coach a lick who’s gonna wanna play for him?

After last night, that’s a problem. Hell, right now Jones looks like the Special Man from the Frankie and Johnny’s commercials.

You know the Special Man, right? The one AD plays on TV now?

He lets ’em have it. With NOOOOOOOO problems.

Jones better not run out there with some schizoid team next year that loses to Missouri and Mississippi State. And he better not make a practice of leavin’ three time outs on the board in close games. An’ he better not specialize in blowin’ big leads or lettin’ other teams go off on big runs without doin’ somethin’ about it.

Because if next year’s team underachieves, there will be no stoppin’ people sayin’ this guy’s a bad coach. MacAoidh’s gonna be rollin’ around sayin’ I Tole You So to everybody who’ll listen, an’ he’s gonna have company.

An’ we’ll be right back where we were with LSU hoops after that. In the gutter, an’ nobody cares.

Sure wish there was an AD we could have faith in to fix it. Instead we got a guy who doesn’t wanna build the dinin’ hall he’s got private money for because LSU’s budget might get cut.