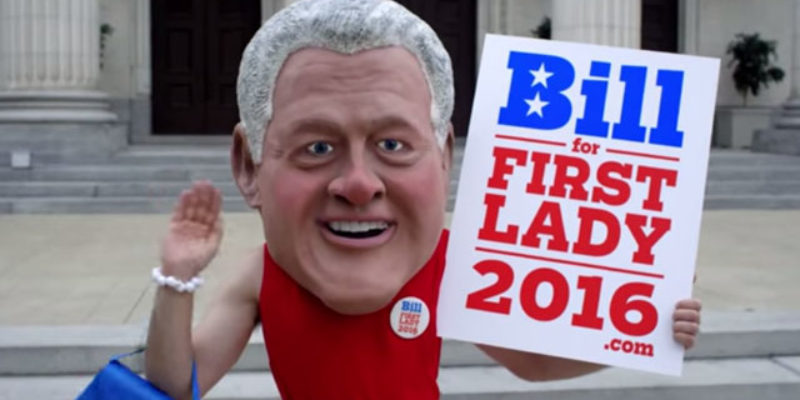 Somebody on the Left actually thought this was a good idea and spent money producing it. This isn’t a Republican spoof; it’s an actual Democrat PAC who put this web ad together.

How’s this going over? Well…

This is the brainchild of someone named Luke Montgomery. You’ve never heard of him, but you probably do know some of his work. He’s the idiot who inflicted the “Potty-Mouthed Princesses” web ad on the public last year. And he’s a capo in the gay rights mafia of long standing.

Montgomery’s Bill For First Lady stupidity actually dates back to 2005. It didn’t take off then, so he’s trotting it back out 10 years later.

The lesson? They have nothing. They have recycled crap from people without talent. Even the dopey script on the web ad is the same crap messaging about pay inequality, etc., the Democrats have been spouting since 2012. They just punched it up by mixing kids and cross-dressing – which if you think is in poor taste and as trashy as it is stupid just makes you a bigot.

If there was a candidate who had some novelty about him or her, and could be a cultural figure more than a political figure so as to make moronic messaging like this appealing to low-information and low-engagement voters, maybe it might be somewhat effective. There were things the Democrats did in support of Obama which were infantile in nature that were effective in making their candidate cool, but their candidate could make a credible case that he was cool.

Interested in more national news? We've got you covered! See More National News
Previous Article UNO Students Stand Up For Israel And Go After The Palestinian Authority
Next Article Get Ready To Be Lectured On Racism At Your Baton Rouge & New Orleans Starbucks