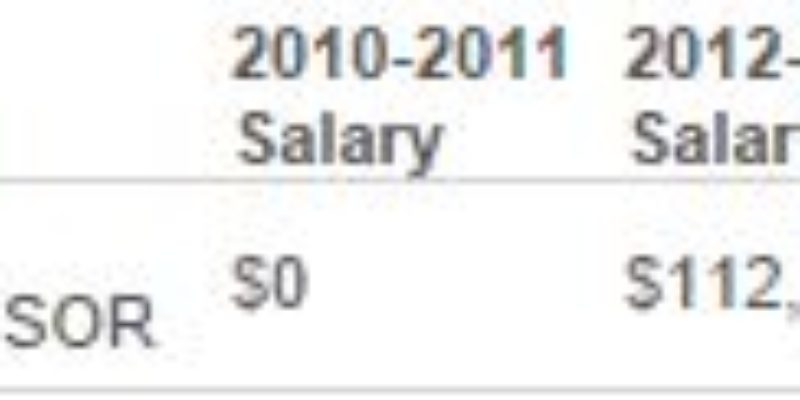 UPDATE #2: We’re told that Mann’s workload is the result of his wife’s illness, a quick recovery from which we offer our deepest hopes.

However, the same link from just below shows that he only taught one class, plus a lab for that class, in the fall.

UPDATE: At this link, you can search LSU’s course offerings for the spring semester. And if you look at the offerings from the School of Mass Communication, you’ll see that Bob Mann is teaching one class this semester.

ORIGINAL: You might have seen LABI President Stephen Waguespack’s column this afternoon here at the Hayride. Wags’ subject was the proposal by Gov. Jindal to make Louisiana’s inventory tax credit non-refundable, which on Friday we noted amounts to a $377 million tax increase for businesses carrying inventory and other movable property on their Louisiana premises.

Waguespack was, unsurprisingly, not a fan of the idea.

For decades, Louisiana has maintained an ad valorem tax on inventory held by manufacturers, distributors, and retailers that is assessed and collected by local government. Louisiana’s local inventory tax is assessed on tangible personal property used in a business, including goods awaiting sale, commodities that are in the course of production, and raw materials and supplies.

In 1991, the Louisiana Legislature passed legislation to implement a state tax credit for the local inventory tax paid by such businesses, which was a major step to make the state more competitive for business investment and jobs. Everyone understood the uncompetitive nature of this tax and wanted its negative impact on our economy eliminated. To accomplish this objective, this complicated approach was enacted rather than an outright repeal of the tax.

The state inventory tax credit had an immediate positive economic impact and was credited for bringing a number of new warehousing facilities into the state, along with the jobs they created. Today, employers across Louisiana receive a tax credit against their state corporate income and franchise tax liability for the inventory tax amount they pay to local government. Any amount beyond their state tax liability is refunded to employers up to the amount they actually paid to local government. This rebate is equivalent to the amount of inventory taxes actually paid.

More than 10,000 businesses – from large, multinational corporations to small manufacturers to neighborhood grocery stores – pay inventory taxes to local government and claim the refund, generating about 11 percent of all local property tax collected in Louisiana.

The vast majority of states do not have inventory taxes. In fact, the Tax Foundation estimates only 13 states levy an inventory tax, and that states are reducing or eliminating taxes on tangible personal property as a trend more generally due to their many disadvantages.

By definition, inventory taxes disincentivize investment, expansion, capital accumulation and growth. That can put neighboring states without the tax at an advantage particularly in attracting distribution centers.

Researchers estimate that a tax increase on personal property, such as the inventory tax, of one percentage point reduces annual employment growth by 2.44 percentage points.

The tax applies to mobile property that can quickly respond to a change in tax laws and regulations, which according to the Tax Foundation creates “strong incentives for companies to locate inventory in states where they can avoid these harmful taxes.”

The negative effect of property taxes, such as the inventory tax, is particularly severe, primarily because these taxes are paid annually, regardless of any profits or losses earned by employers. Inventory taxes are a substantial business expense that will likely be passed on to consumers, raising costs for everyone, not just employers.

This convoluted and uncompetitive scheme has been tolerated in Louisiana for years and the negative effects it should have on our economy has been masked by the credit since 1991.

Local governments should also oppose any elimination in the current state inventory tax credit, as they would see an erosion of their revenues when companies losing the credit choose to shift inventories to locations where such a tax does not exist. Companies will be incentivized by the credit’s repeal to warehouse their inventory in states that do not have an inventory tax. They can later ship that inventory in when it is required, putting our small to mid-size retailers and manufacturers at a huge disadvantage.

If you read Waguespack’s entire column, what he proposes is not to keep the tax credit and let that $377 million shortfall hit higher education right in the shorts. Instead, he proposes killing the inventory tax altogether and therefore the tax credit that goes with it, which would save $462 million in the state budget that could be plowed into higher ed to stave off cuts. Local governments would get caught without taxing movable property as a revenue source, meaning that the state’s budget problems would fall on them to some degree and many would need a raft of reforms in an effort to soften the blow to them.

But since higher education is funded through state dollars, there is no reason why those advocating for higher ed should be openly opposed to Waguespack’s plan.

Enter our pal Bob Mann, the former chair of LSU’s journalism school who makes a six-figure salary to teach a few classes here and there while he’s not regurgitating Democrat talking points at his blog and in the pages of the Times-Picayune.

LA legislative session shaping up as a battle between higher ed leaders and LABI. In that fight, I’m afraid I’d put my money on LABI.

There was more, including an exhortation for higher education leaders to “fight,” and an upbraiding of the members of the Board of Regents for their rather idle consideration of the idea of privatizing some of the state’s overbuilt public colleges as an alternative to merging or shutting them down as opposed to the yelling and screaming and insults he would have them direct at the state’s political leaders.

Mann didn’t mention the unseemliness of his accusations of avarice on the part of LABI while he’s busy soliciting for higher ed funding to pay his 128K salary. That notwithstanding, it’s even more unseemly for him to disregard what Waguespack is saying, appropriate his own characterization of LABI’s motives based on his years as a Democrat media flack and simply bash as a political enemy an organization which has advocated for higher education as a means toward a qualified workforce for decades.

It’s an astonishingly stupid bit of immaturity on Mann’s part, but not really a surprise. The more interesting question is, when are those higher ed leaders he would have man the barricades going to upbraid him for his sloppy, loudmouthed and nakedly hypocritical efforts to create LABI as an enemy?

At some point, people might start thinking the cuts to LSU become truly significant only when they hit Bob Mann’s wallet. What a Twitter show we’ll see then!