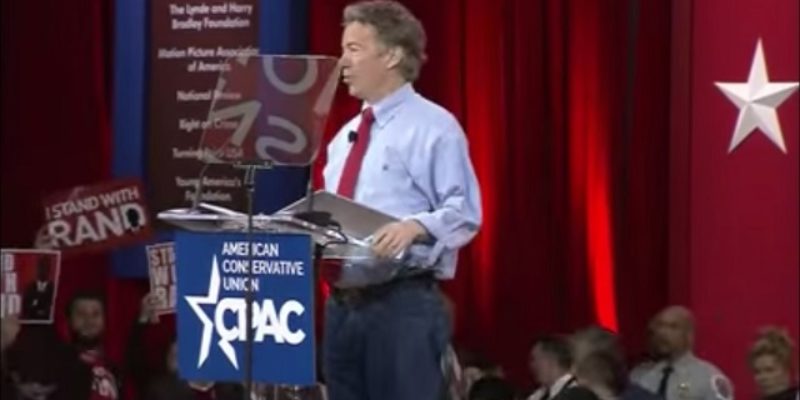 The first major “non contest” contest of the GOP presidential campaign is the American Conservative Union’s CPAC Conference straw poll the year before the presidential election.

Almost all of the probable Republican contenders for the White House attend. In the case of the 2016 race, only one notable likely candidate skipped (ex-Arkansas governor Mike Huckabee).

The conference is where presidential hopefuls introduce themselves to conservative activists and frame their future candidacies.

Another reason why the CPAC event is significant is due to the large contingent of national media and journalists from the home newspapers of the aspirants.

The event typically commands not just the presence of the contenders but in some instances a substantial investment of resources, as those who place a premium on the results of the straw poll purchase event credentials, subsidize trips of attendees by footing hotel room bills and transportation, and distribute quasi-campaign materials, “quasi” because as of the moment no one has thrown their hat in the ring.

And of all of the straw polls, only the August Ames Straw Poll in Iowa receives as much media attention.

Unsurprisingly, Kentucky US Senator Rand Paul finished in first place, as he had in the previous two CPAC straw polls and as his father then-US Representative Ron Paul of Texas had in 2009 and 2010.

Beyond the libertarian mindset of many of the predominantly young CPAC crowd, Paul and aligned entities have been spending a great deal of money trying to win the straw poll.  Red and black “Stand with Rand” t-shirts, buttons and signs featuring the curly headed silhouette of Paul the Younger have been given away at the last three conferences.

In fact, CPAC has served as a type of an annual “drill” for the national Paulistas, complete with organizational meetings held in nearby hotel ballrooms.

Both groups spent heavily at CPAC 2015 as did Jeb Bush and Ted Cruz’s people.

The ex-Florida governor’s Right to Rise PAC held a rally not far from the straw poll voting stations shortly after the conclusion of Bush’s appearance on the main stage while Cruz hosted a “meet and greet”.

Wisconsin Governor Scott Walker’s big expense seemed to be some hastily printed t-shirts and signs made promoting his Our American Revival PAC and former Pennsylvania Rick Santorum supplemented his speech with a town hall event.

Though Paul has won three CPACs in a row, he does not seem to have been able to break out beyond the core of support he has enjoyed at the previous events.

Contrasting Paul in commitment of resources but trailing him by a mere 4.3% was Walker at 21.4%.  Paul’s numbers fell from the 31% from 2014 while Walker’s surged from the 7% the year before, the big difference being that the Wisconsin governor was focused on a tough re-election and was not so much hinting about preparations for a White House run.

The 2014 Walker numbers represent a genuine “draft”; his 2015 showing, an impressive movement.

Six other candidates listed on the CPAC ballot received less than 1%.

Cruz received 11% in 2014 and did not gain from the drop in Paul’s share of the CPAC vote while Carson moved up marginally from last year, where he got 9%.  The two have demonstrated agreeability amongst conservatives though apparently not viability.

Bush needed to make a splash of some sort to show that his brand is not totally anathema to the party base.  The Jebrillos will boast that 5th place after not even being on the straw poll radar (by his own request) at previous conferences shows that he has conservative appeal.  The ContraBushes will see the glass half empty, pointing out that his ceiling amongst the right is very very low.

An objective view would concede the significance of his top five finish after making an effort (i.e., busing supporters in) but Bush has more work to do to bring in the party’s conservative base.

The two other noteworthy showings were Trump and Fiorina.  The former verbally pushed for straw poll support in an appearance at a Citizens United event while the latter made the most of introducing herself to conservative activists and reconstructing her political identity after her unsuccessful bid for US Senate in California.

Behind Walker, one could argue that Fiorina was the second biggest winner from the straw poll.

Christie’s numbers were meaningless aside from being a source of anguish for conservative candidates who fell below the New Jersey governor.

The bad news for Santorum is that despite having been runner up in the 2012 Republican presidential fight, his support has dwindled, though there is an upshot: he fared better than other candidates who have appeal with evangelicals.

After finishing a strong second in the 2013 straw poll, where Rubio garnered 23% to Paul’s 25%, the junior senator from Florida does not seem to have been fully forgiven by activists for his once “squishy” posture on immigration.

While demographically and ideologically the participants of the CPAC Straw Poll are not reflective of the Republican presidential primary/caucus electorate, the non-scientific survey does provide a peak into the minds of conservative activists.

The big story from CPAC 2015 is that a lot of conservative activists who paid their own way to National Harbor are lining up behind Walker’s nascent presidential candidacy.