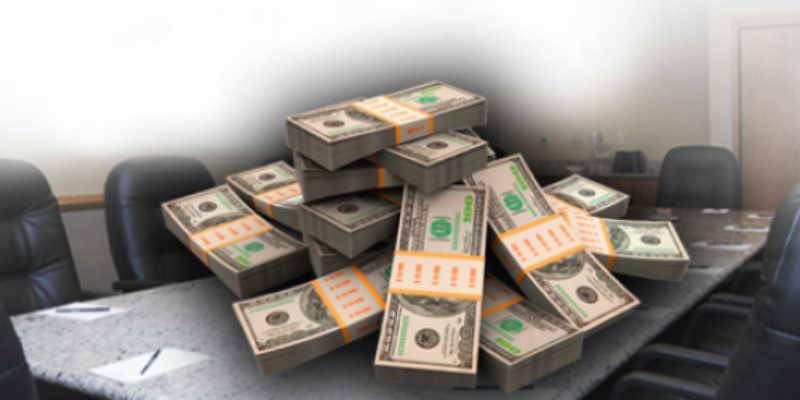 IBM yesterday released a letter announcing their opposition to State Rep. Mike Johnson’s “Marriage and Conscience Act.” The letter, which was addressed to House Speaker Chuck Checkley, whoever that is, and Governor Jindal and Senate President John Alario. 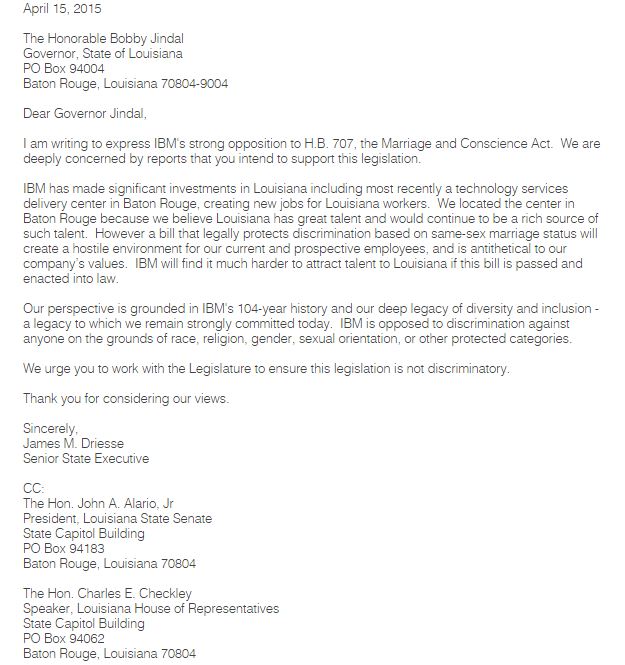 First of all, it’s House Speaker Charles Kleckley. If you’re going to send a letter to the Speaker of the House, you really should get his name right. A simple Google search would’ve been great here.

Governor Jindal has released a letter  telling IBM to go pound sand. State Rep. Johnson had this quote for The Hayride:

“It seems clear the company executive who wrote the letter opposing HB 707 has either not read the legislation or not understood it. There is nothing in our bill that does what the executive suggests, and it seems he is confusing this with recent, unrelated legislation in other states. Every company that enjoys the freedom and prosperity of our country should also work to support those ideals. The idea that government should be prohibited from discriminating against people simply because of their faith has been a foundational principle of our republic since its founding. It is alarming that any corporate executive would want to oppose that principle today.”

How dare IBM try to extort the State of Louisiana after the state gave them $14.8 million to come here? That’s besides incentives from East Baton Rouge Parish totaling at least $70 million, including a brand new IBM building that will be owned by the Baton Rouge Area Foundation. This is extortion.

IBM was a supporter of East Baton Rouge Parish’s idiotic “Fairness Ordinance” which would allow trial lawyers to sue if there’s alleged discrimination against homosexuals. IBM apparently thinks we are a bunch of homophobes and bigots here in Louisiana.

While I would hate to have IBM leave, maybe they should leave the state if their conscience is so offended by this state’s attempts to protect religious liberty. They should pay back all the corporate welfare they have received and leave. While it’s good IBM is bringing 750+ jobs to Baton Rouge, these are $45k jobs. Many Louisianians can already make a lot more going offshore, working in the petrochemical industry, and doing blue collar work.

I would bet any money though on IBM leaving the state if HB 707 becomes law. Let’s look at some of the other countries IBM works in.

One country IBM is active in is Saudi Arabia. The company signed a contract with the Saudi Ministry of Education to boost cybersecurity. Saudi Arabia doesn’t have an LGBT anti-discrimination law, it executes homosexuals.

IBM also has operations in Pakistan. Don’t worry, Pakistan is more tolerant than Iran and Saudi Arabia when it comes to gay rights. They merely throw homosexuals in prison for life.

IBM has collected over $1.2 billion in state, local, and Federal corporate welfare over the past two decades. They go into communities all across America and shakedown local and state governments. They promise all these “high-paying” jobs if we just give them money and they get governments across the country to do their bidding, like we see here.

There is a line from FDR’s speech where he accepted the Democrat Party’s nomination for President in 1932 that pertains exactly to this situation.

One word more: Out of every crisis, every tribulation, every disaster, mankind rises with some share of greater knowledge, of higher decency, of purer purpose. Today we shall have come through a period of loose thinking, descending morals, an era of selfishness, among individual men and women and among Nations. Blame not Governments alone for this. Blame ourselves in equal share. Let us be frank in acknowledgment of the truth that many amongst us have made obeisance to Mammon, that the profits of speculation, the easy road without toil, have lured us from the old barricades. To return to higher standards we must abandon the false prophets and seek new leaders of our own choosing.

Will the Louisiana Legislature choose liberty or Mammon? Now is a time for choosing and we will be watching. Legislators need to choose wisely.