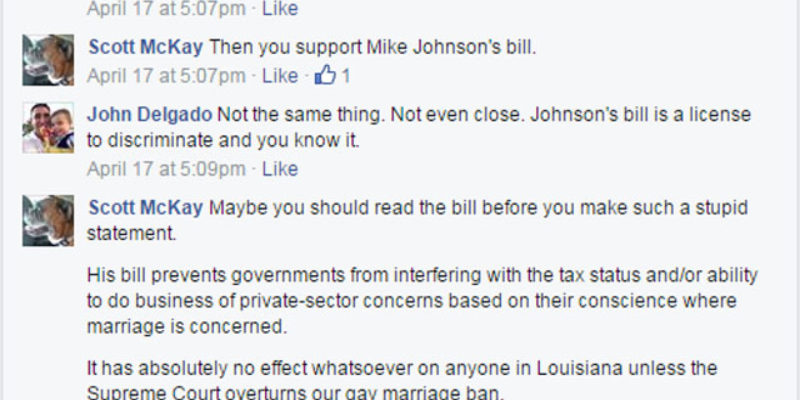 On Friday, the already-toxic debate over the Louisiana Marriage and Conscience Act got worse thanks to an intervention by the worst politician in Louisiana.

That would be Baton Rouge Metro Councilman John Delgado, whose boorish assaults on people he disagrees with have deservedly made him a clownish figure. But Delgado’s most recent splutterings go a bit beyond his previous characterization of political opponents as the Taliban or promoters of “Christian Sharia law.”

Delgado called HB 707’s sponsor, Rep. Mike Johnson, a “despicable bigot of the highest order” Friday for the sin of bringing a bill that would forbid the state or local governments in Louisiana from attacking business licenses or tax status of private-sector entities who refuse to participate in gay weddings according to their religious beliefs.

“It’s not surprising that IBM would reject a bill that is aimed at openly encouraging discrimination,” said Delgado, a Republican. “Bigotry is bad for business, and it’s only common sense that they would recognize that and call this bill what it is. That Gov. Jindal thinks we’re too stupid to recognize it is also not surprising.”

I asked Delgado on Facebook if he had a clue what he was talking about, and it quickly became obvious he did not. 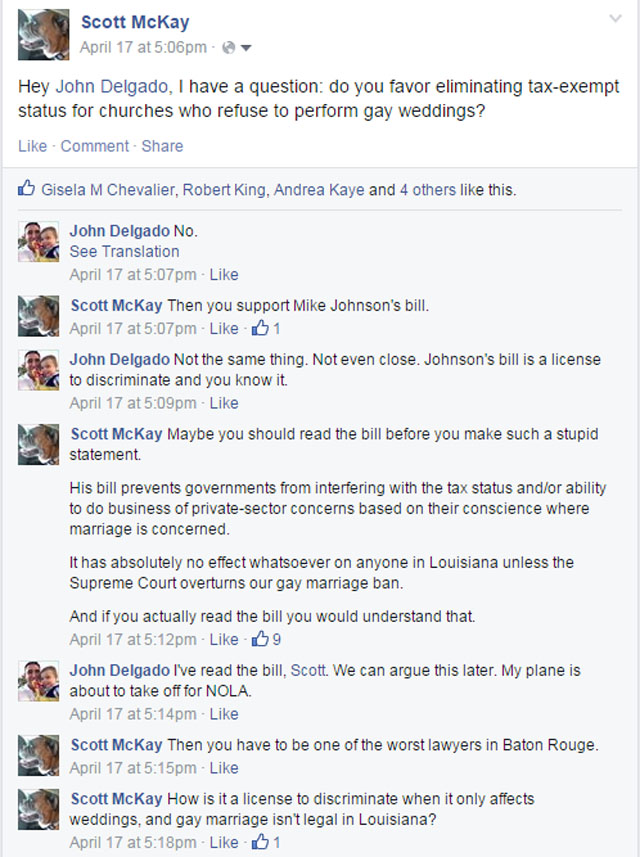 Again, in case this isn’t clear, gay marriage is not legal in Louisiana. As state law currently stands, Johnson’s bill would have no practical effect whatsoever – because it would prevent governments at the state or local level from negatively affecting the operational status of businesses refusing to participate in a ceremony which is NOT CURRENTLY LEGAL in Louisiana.

People who have the capacity for analytical thinking understand this.

Sen. Conrad Appel, who was a guest on the Red Bayou Show podcast last week and expressed reservations about Johnson’s bill, is such a person. Appel rightly noted that the bill has no practical effect in Louisiana based on current law and is thus not a particular fan of the legislation because the circumstances it seeks to address are not ripe yet (and he’s concerned about the effect the publicity around the bill will have on tourism). Appel’s concerns led to a very interesting discussion of the bill with Rep. Alan Seabaugh on the podcast, which you can hear here. The discussion of HB 707 is, conveniently, at the very beginning of the show.

Appel’s position is a reasonable one. He certainly didn’t impugn the motives or character of anyone opposed to his viewpoint, though he did jokingly take a poke at the state of tourism in Shreveport which led to a humorous exchange with Seabaugh on that subject.

Seabaugh’s answer to the ripeness question cuts to the heart and rationale of Johnson’s bill – which is that if the Supreme Court overturns all gay marriage bans in June and makes gay marriage legal in Louisiana, it will be open season on Christian and other business owners who wish to operate on the basis of religious conscience with respect to servicing gay weddings – be they florists or bakers or photographers or even churches. Yes, the gay lobby is beginning to threaten churches’ tax-exempt status if they “discriminate” against gay weddings. That might sound absurd, but five years ago the idea of a business owner being run out of commerce by government for declining to service a gay wedding would have been considered absurd

Delgado’s position is empty except for his slurs of believing Christians as bigots, and Johnson in particular.

After receiving pushback for his foolish and intemperate comments, Delgado consulted with his communications guru James Hartman and put out a press release which essentially polishes his language but doubles down on the accusations…

A bill pending in the Louisiana Legislature to protect businesses that refuse service on the basis of religious beliefs regarding marriage is nothing but grandstanding and veiled bigotry, Baton Rouge Councilman John Delgado said today.

House Bill 707, by freshman lawmaker Rep. Mike Johnson (R-Bossier City), would prohibit the state from taking any action against businesses that refuse service on the basis of belief regarding same-sex marriage. In an interview with NOLA.com earlier today, Delgado said Johnson is a “despicable bigot of the highest order.”

“This kind of legislation serves no purpose but to put the author’s own biased views on display,” Delgado said. “It’s a solution in search of a problem, and if the Supreme Court does what it should – and what we expect – in this term, this will only lead to more litigation in Louisiana as same-sex marriage will become the law of the land.”

Delgado, also an attorney, a Republican and a Catholic, said lawmakers at all levels need to back away from this issue and accept the evolution of public opinion – and the potential impact on commerce.

Already, major corporations are indicating this legislation taints Louisiana’s image and threatens our economic development and stability,” Delgado said. “It doesn’t matter if it results in actual discrimination or not; this bill, if it passes, sends a message to business interests, tourists and all people that Louisiana is not welcoming to all people – or the jobs and money they bring to our economy. It’s ridiculous.

“Rep. Johnson may say he’s not a bigot, but there’s no other reason for him to have filed this bill,” Delgado said. “Shame on him and shame on the Legislature if they pass it.”

Delgado also said the GOP does itself no favors with legislation like this.

“Younger voters don’t share these views and are turned off by them,” Delgado said. “It’s bad policy and it’s bad politics.”

The flawed reasoning here is striking, coming from someone who calls himself a lawyer and an elected official.

First, he says the bill serves no purpose – which has some truth to it as we’ve shown. Then he endorses the very event which gives the bill purpose, and further decries the “litigation” that arises when governments and left-wing attack the First Amendment rights of Louisiana residents according to the gay agenda. Better, according to attorney Delgado, to deny people their day in court than to have any further debate over religious freedom in this state.

Then there is an admission that the bill doesn’t guarantee anyone is discriminated against, a poorly-defended assertion that Louisiana’s economy will suffer if the bill passes and a redoubling of his accusation that Johnson is a bigot because Delgado can’t see a reason for him to file the bill. And finally, a demand that the GOP kowtow to the wishes of millennials and abandon the principle of individual freedom of conscience which built the party 150 years ago.

Consider the disrespect and intellectual poverty in that statement about Johnson. What Delgado is saying is that you cannot come to an understanding of homosexuality as sin through a reading of the Bible without being bigoted against homosexuals. That is plainly wrong – Biblical tradition, and that of almost all major religions, casts homosexuality as sin along with lots of other behaviors of a sexual nature, and a position that adherence to religion is borne solely of bigotry is patently absurd. Delgado would have people reject religious teaching on the subject of sin, or be considered as bigots subject to sanction or even persecution by the State.

I know Mike Johnson, and Mike Johnson is not a bigot. He’s one of the most temperate, mild-mannered and polite individuals residing in this state. And Johnson’s filing of this bill is not an attempt to get attention. He’s a constitutional lawyer who has argued cases on these issues for a considerable length of time, at the Louisiana Supreme Court and in federal courts. He has a deep understanding of religious liberty as it is represented in law and, like many others who have considered the implications of such a radical change as instituting gay marriage across the country, seeks to build a foundation of legal protection for “conscientious objectors” to gay marriage.

Mike Johnson has an intelligent position on his bill and he can defend it intellectually. John Delgado can’t defend his position on any basis other than screaming and demagoguery.

John Delgado is a poisonous influence on Louisiana politics. The sooner he is gone from the scene the better. There has to be a carnival somewhere in need of a barker; perhaps he can seek attention in that forum.