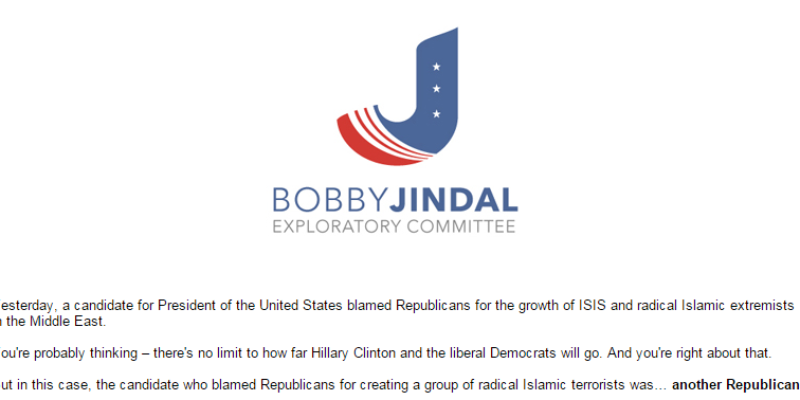 After violating state law this week, Gov. Bobby Jindal is still not giving up on his attack against Sen. Rand Paul (R-KY).

Jindal wrote earlier in the week on an official State of Louisiana stationary that Paul was wrong on his remarks regarding ISIS, in which Paul said GOP war hawks were partially to blame for the rise of the terrorist group.

We reported on the story, here, and explained how Jindal did in fact violate the Louisiana Constitution for issuing the attacks on Paul through an official Louisiana press release.

Since, there has been no apology from Jindal on his misuse of the governorship to attack Paul for ISIS remarks. Actually, Jindal is doing quite the opposite.

The Republican’s exploratory committee for the 2016 presidency released statements again against Paul’s views on ISIS and the GOP. Here’s that news release in full:

Yesterday, a candidate for President of the United States blamed Republicans for the growth of ISIS and radical Islamic extremists in the Middle East.

You’re probably thinking – there’s no limit to how far Hillary Clinton and the liberal Democrats will go. And you’re right about that.

But in this case, the candidate who blamed Republicans for creating a group of radical Islamic terrorists was… another Republican.

If you agree with Governor Jindal that the next President’s job is to have the discipline and strength to wipe ISIS off the face of the earth, then stand with him today.

Maybe Rand Paul wants to be the favorite Republican among the “blame America first” crowd. I can’t explain his illogical argument, and apparently neither can he. But I do know this: Governor Jindal was right when he said it is a perfect example of why Senator Paul is unsuited to be Commander-in-Chief.

Now Senator Paul has jumped out even to the left of President Obama and Hillary Clinton, taking the weakest, most liberal Democrat position possible.

If you’ve had enough, then stand up and say so.

If you’re ready for a President who isn’t afraid to call out evil in the world, then stand up and say so.

If you’re ready for a President who will fight ISIS and radical Islamic terrorists, then stand up and say so.

President Reagan had a strategy for defeating communism: we win, they lose. He didn’t blame Republicans or come up with theories about how it’s really our fault for provoking an evil empire into existence.

If you’re ready for a President who will show that kind of leadership again, then stand up and say so.

While Jindal may disagree with Paul on the GOP’s handling of foreign affairs, to assert that Paul is to the left of President Obama may be an overreach and huge stretch from the truth.

Paul is one of the few candidates in the race who holds right-leaning libertarian views, like getting rid of affirmative action and eliminating useless departments in the federal government, like the Department of Interior and the Department of Education.

Jindal has not yet announced his 2016-bid, but if he follows other GOP candidates who began with exploratory committees first, he could be announcing any day.