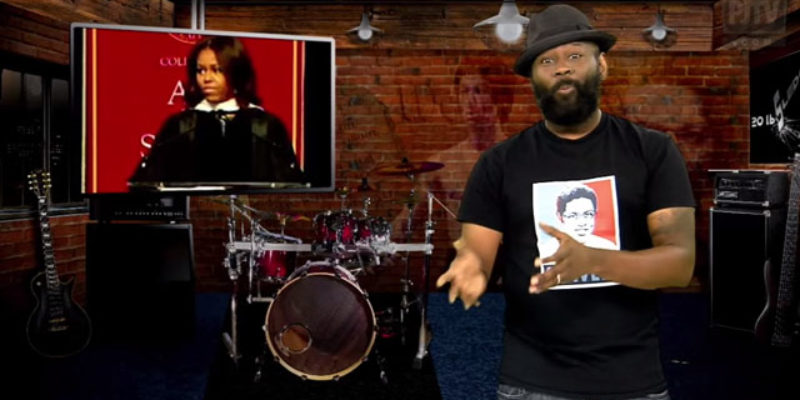 We really ought to share the ZoNation videos more often, because they’re really quite good.

But this one might have been the best. He’s taking on that commencement speech Michelle Obama gave at Tuskegee Institute, in which she rattled on interminably about how terrible life is for black people, how terrible her life has been and how mean white folks are, and he’s tearing it to shreds.

The best part? He points out that the attitude and mentality Michelle Obama shows off is precisely the opposite of that espoused by Tuskegee’s founder, Booker T. Washington. Washington had zero use for the race-baiters and “community organizers” plying their trade in the black community in the decades immediately after the civil war; his prescription for the advancement of black people was the acquisition of marketable skills and the embedding of black people deep into the economy – because when blacks held the skills the economy needed and applied those skills successfully in the workplace, there would be no question of greater social and civil acceptance of blacks.

That’s a model, as it happens, which has served every other ethnic group assimilating into American society. And had Washington been successful in gaining universal acceptance for that philosophy in the black community (unfortunately, in one of the more fateful developments in American history it was the socialist W.E.B. DuBois and the grievance crowd who ultimately carried the day) a century ago, we would have far fewer problems of race in this country.

But Washington founded Tuskegee on the principles he espoused, just like he built some 5,000 schools for black kids across the country. The original students at Tuskegee actually built the school – right down to the bricks they baked out of clay cut from the riverbank. And now his centerpiece institution was regaled by someone who spreads grievance and hopelessness.

What a shame. Thanks to Zo for countering it.

Interested in more national news? We've got you covered! See More National News
Previous Article I Did Two Pieces For The American Spectator This Week…
Next Article Low Popahirum, May 15, 2015