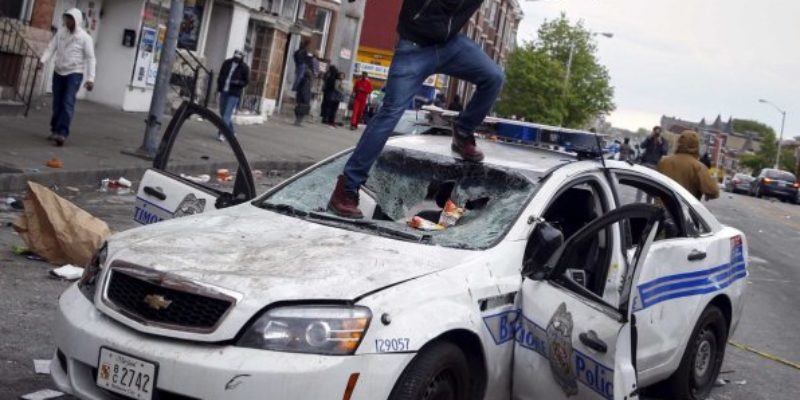 In a post-rioting Baltimore, social justice means the Baltimore Police Department (BPD) has become lackadaisical with policing thanks to Mayor Stephanie Rawlings-Blake and city Prosecutor Marilyn Mosby at the helm of city leadership.

There’s been an alleged “Blue Flu” going on within BPD, where more than 50 officers are attempting to oust Rawlings-Blake for her poor management of the Baltimore Riots, when criminals were allowed to dismantle, loot and burn the city.

With the Baltimore police fed up with Rawlings-Blake, there seems to be a shift in the police force where the police pander to social justice advocates like Al Sharpton and now simply allow the city to burn.

Just this Memorial Day weekend, there were nine people killed and 28 people wounded during shootings in the city. And then there is this video footage from a local broadcast station, in which a black male who has been arrested decided to put on a show for the TV cameras.

At about 1:15, the video footage shows the Baltimore police walking calmly with the black male suspect. Then, later on, once the black male sees the news media video cameras, he drops to the ground and pretends that he is hurt.

Notice, the police do not do anything to stop the man from making a spectacle. This black male is probably following some form of street code going around in these areas of Baltimore where kids are told that if you are arrested, you need to act as though the police have used excessive force on you and you too can become the next Michael Brown or Freddie Gray.

This comes in the wake of Rawlings-Blake and Mosby practically sticking up for the riot-ers and condemning police brutality before it has even been worked out in the state’s judicial system.

All in the name of social justice.

Interested in more national news? We've got you covered! See More National News
Previous Article Mitch Landrieu, Traffic-Ticket Predator
Next Article And The Award For The Most Meaningless Bill Of The Session Goes To…..