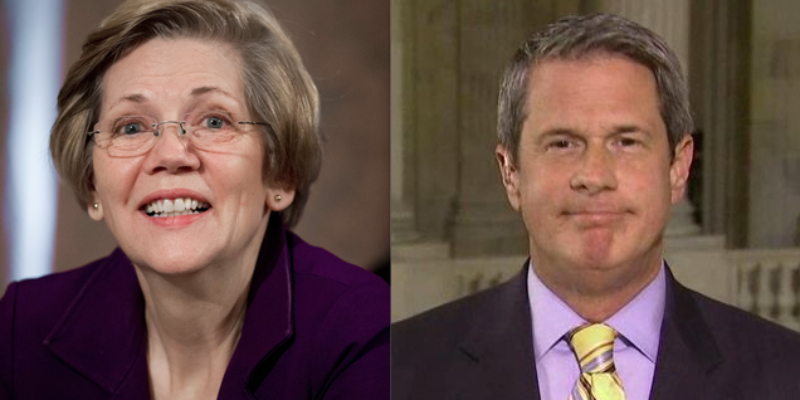 No one thought this day would ever come. The day that conservative Sen. David Vitter (R-LA) and liberal Sen. Elizabeth Warren (D-MA) agree on something in Washington.

Vitter and Warren have teamed up in an effort to make the Federal Reserve Bank more transparent with a slew of proposed complicated regulations that the average voter would have no clue what either one of these two are even talking about.

Here’s how the Wall Street Journal puts it:

Massachusetts liberal Elizabeth Warren and Louisiana conservative David Vitter introduced legislation to force the seven-member Federal Reserve Board to formally vote on all enforcement actions against banks that result in fines of $1 million or more.

The bill, introduced by the two senators Thursday, also would give each Fed governor his or her own staff. Currently, Fed board staff largely serve the Fed chairwoman or chairman.

The lawmakers said the changes would bring greater transparency to the central bank and help protect taxpayers from underwriting bailouts of big banks next time crisis strikes.

While all of these banking regulations may be confusing and not stick out, as banking issues are far from polarizing topics, as a major accomplishment in a gubernatorial race, the fact that Vitter is taking on the Federal Reserve with Warren will without a doubt stand out to every voter.

Vitter is seen as almost a rogue Republican in Washington DC. He does not act the way the GOP establishment likes and he does not really care, he says and does, sort of, what he truly believes.

And Vitter certainly is a fierce opponent to most of the Democratic Party in Washington, as he has been a staunch critic of former Secretary of State Hillary Clinton and new Attorney General Loretta Lynch.

With all of that non-support from the Washington establishment though, Vitter is still managing to work with a liberal like Warren, who many progressives want to run in the 2016 presidential race.

For Warren, working with a conservative does not really help her seem more presentable, because the fact is, the only voters voting for Warren in a presidential election are democrats anyway, as she is far-from-center.

But, for Vitter, working with Warren gives him an edge in the state’s gubernatorial race because it portrays him as a conservative who can be bipartisan when he needs to be. Many times, conservatives and liberals teaming up works, but sometimes they entirely fail.

Remember when Sen. Marco Rubio (R-FL) fell off the radar for a while in 2014? That was largely because Rubio worked with Sen. Chuck Schumer (D-NY), Sen. Dick Durbin (D-IL) and Sen. John McCain (R-AZ) on the infamous “Gang of Eight” immigration reform bill.

Rubio was seen as a Senator who caved to the establishment when he paraded around with Durbin and Schumer. Nonetheless, this was due to the fact that illegal immigration is a very, very polarizing and divisive issue.

But going after central banks? That is an issue every, liberal and conservative, can get behind. Which is why it is such a phenomenally interesting political move on Vitter’s part to attack the Federal Reserve with an uber-liberal like Warren.

Interested in more news from Louisiana? We've got you covered! See More Louisiana News
Previous Article Can You Guess Where Louisiana Ranks On A ‘Best For Business’ List?
Next Article SADOW: Little Political Benefit In Thursday’s Hodgepodge Of Tax Bills