See the update below and corrected the headline 4:54 PM

No, we’re not making it up. The Louisiana State House passed HCR 75, which essentially lays the groundwork to expand Medicaid. The bill was largely written by the Louisiana Hospital Association and was sold by Speaker Charles Kleckley (RINO-Lake Charles) as them footing the bill and not one penny coming out of the state general fund.

While selling his bill, Kleckley engaged in some doublespeak that made would’ve made George Orwell or Joseph Goebbels proud. He said that the bill doesn’t expand Medicaid, but merely gives the next governor a path to enact it. Well considering that all four candidates for governor haven’t ruled it out, what does Kleckley think will happen?

House votes 96-0 for @ChuckKleckley legislation to provide financing mechanism for Medicaid expansion if next gov wants to do it. #lalege

Here’s the roll call vote. Hint, your state rep voted for it or walked on the vote: 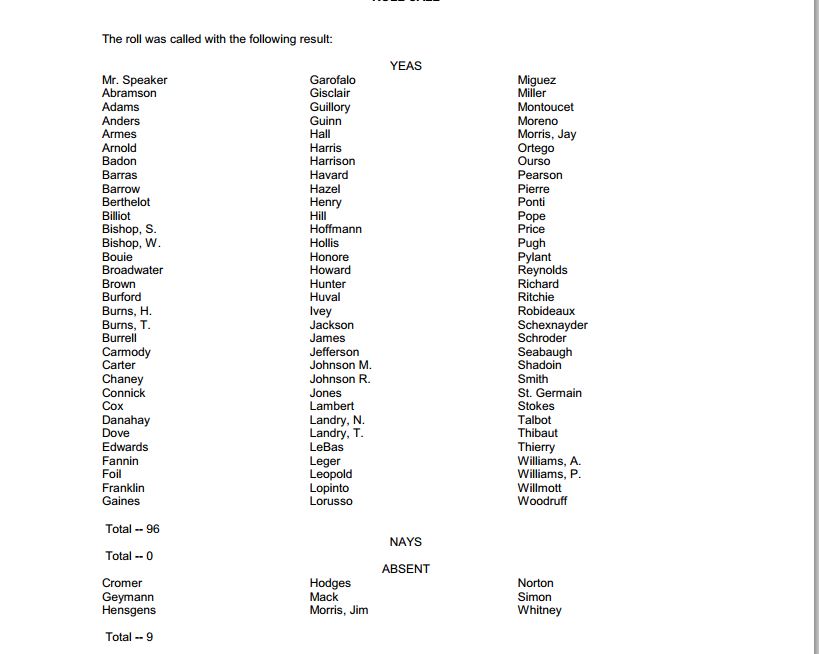 Not one member of the Louisiana House stood for the taxpayers of Louisiana. Instead, they believed in the talking points of “free Federal money” and the hospitals will pay for it. Here’s a question: what happens when Medicaid expansion costs Louisiana more than projected? Will the hospitals pony up more money or will the money come out of the state general fund?

Here are the RINOs who not only voted for Medicaid expansion, but also have gone on the bill as co-authors.

As I’ve said in other pieces, this legislative session is providing a service to voters of Louisiana. It is becoming very clear that very few Republicans in Louisiana are actually conservative. October is coming and it’s time for Louisiana conservatives to hold these people accountable for their votes for big government.

UPDATE: Some members of the legislature are yelling at Scott and I claiming this bill is not Medicaid expansion. They’re pointing out that HCR 75 does not authorize Medicaid expansion, and technically, they’re right.

But what this bill does is lay the groundwork for Medicaid to be expanded under the next governor of Louisiana. It provides a funding mechanism to pay for it. Here’s the catch, all four candidates for governor either support Medicaid expansion or won’t rule it out. The governor has to make a decision on this legislation by April 2016. Make no mistake, this vote today for this bill was a vote for Medicaid expansion.

This bill provides political cover for some “fiscal conservatives” that’s all.

Finally, here’s why the “bed tax” is just a scam.

A deal also ought to end the long-running “bed tax” scam in which states charge hospitals a fee to increase health-care spending and thus their federal matching rate. Then they launder some of the money back to the hospitals to offset the fee. This is real waste, fraud and abuse, not the talking-point version.

Interested in more news from Louisiana? We've got you covered! See More Louisiana News
Previous Article SADOW: Our Legislature Is Getting Dumber On Higher Education
Next Article After Much Debate, A Bill Creating Five-Year Brake Tags Passes The Louisiana House