The conventional wisdom doesn’t particularly prescribe a great result for HB 707, the Louisiana Marriage and Conscience Act, in advance of its appearance before the House Civil Law & Procedure Committee tomorrow. The committee has seven Republicans and six Democrats in it, and the six Republicans on it other than the bill’s author Rep. Mike Johnson don’t stand out as the six most likely to get on board with a “divisive” social issue bill. Some are likely to give it solid support, others…not so much.

But if a poll from WPA Research, performed for the Louisiana Family Forum and released today, is to be believed then the members of that committee had better get Johnson’s bill out onto the floor, and the House (and Senate, for that matter) had better pass it. Because the poll, which gathers opinion after actually reading the text of the bill to respondents, shows a large majority of Louisiana voters in favor – and that majority cuts across the lines of race, sex, age, geography and ideology.

From WPA’s release, here were the two operative questions asked in the poll…

Notwithstanding any other law to the contrary, this state shall not take an adverse action against a person, wholly or partially, on the basis that such person acts in accordance with a sincerely held religious belief or moral conviction that marriage is or should be recognized as the union of one man and one woman.

Based on what you’ve heard, would you support or oppose the Louisiana Marriage Conscience Act?

And, would you say you strongly (support/oppose) the Louisiana Marriage and Conscience Act or just somewhat?

Q4. And, if you knew that your legislator supports the Louisiana Marriage and Conscience Act, would you be more or less likely to vote to re-elect that legislator?

And, would you be much (more/less) likely to vote to re-elect that legislator, or just somewhat?

Those are the questions. Here are the results.

On the first question, the bill gets approval by a wide margin. 67 percent support it, against only 25 percent who oppose. 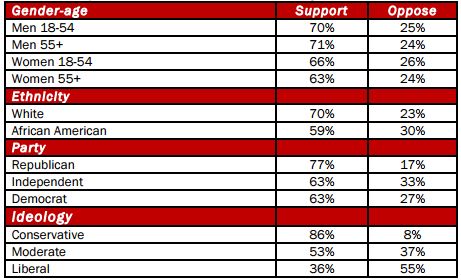 And here are the results broken out by geography…

As for the question about whether the respondents would reward or punish their state legislators for a positive or negative vote on HB 707, the numbers are pretty similar. Some 60 percent would be more likely to support their legislator for re-election this fall, against just 27 percent who’d be less likely. 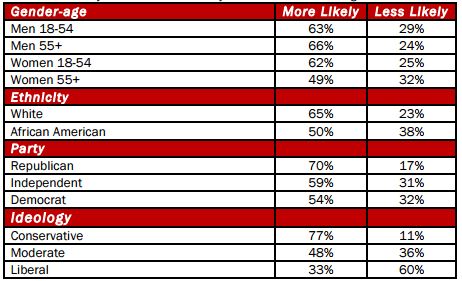 And again, this opinion is shared more or less all over the state, though the further north you get the more pronounced it is…

What to make of this? A few things…

1. While the media has played Johnson’s bill as “controversial,” the public isn’t buying it.

2. While the media narrative, fueled by the Equality Louisiana people and the cultural-Marxist Left – plus their running dogs like John Delgado – is that the bill is an open invitation to “discrimination,” that’s not how the public sees it. In fact, if this poll is to be believed the public is pretty well versed on what the bill does and it wants a space carved out for Christian businesses to live out their faith in their work.

3. This isn’t some Phil Robertson social-conservative thing. When you have two-to-one support for the bill and the leges who vote for it in the New Orleans area, and when it’s ahead 63-27 among Democrats, that’s a very broad-based amount of support for the bill – in fact, while the social conservatives might be for the bill on the basis that gay marriage is a sin and all the other “judgmental” reasons why support for it is bigotry, opponents are also running into a large amount of libertarian support for the bill on the basis that the state shouldn’t have any place in trying to dictate to people whether they have to participate in gay weddings. People are more interested in letting the market sort those things out than stupid politicians, is the message of this poll.

4. Just like Paycheck Protection, if you’re a Republican and you vote against this bill you’re a fool. On every level. You might not be excited about having to deal with the gay marriage issue and items incidental to it in a year with a budget deficit like this one, and that’s perfectly understandable. But voting against 77 percent of Republicans in Louisiana and 86 percent of conservatives, on a bill in which your vote would be tantamount to saying you look forward to the state or local governments providing negative tax or licensing treatment to business owners who live their faith, is a royally stupid thing to do. And if you’re a Republican in the legislature and you vote against that bill, you deserve everything your constituents do to you this fall.

5. Releasing the poll today is smart, but one wishes it would have come out a couple of weeks ago. It might be a challenge to make everybody in that committee understand the full implication of their vote where the electorate is concerned.

You can cook the results of a poll, though WPA Research is not the kind of firm you hire to get cooked results. They’re very reliable, and they’re not known for working cheap. They do polling for high-profile candidates and causes.

But even if WPA Research did cook this poll – that’s an awful lot of cooking to get to 67-25. It’s pretty clear the bill has majority support.

And either the conventional wisdom is wrong, or some members of the House Civil Law committee are about to commit political suicide tomorrow.