Earlier this month when the House Labor and Industrial Relations Committee debated Rep. Stuart Bishop’s HB 418, the Paycheck Protection bill which would put an end to the practice whereby the state deducts union dues directly out of the paychecks of public employees, members of the teachers’ unions, police and fire unions and others like SEIU packed the committee room and spent three hours or more ogling and threatening members of the committee who were voting for the bill. This amid testimony from their representatives to the effect of “either kill this bill or we’ll kill your political career on Election Day.”

We noted at the time that those were largely empty threats, since most of the Republican members of the Labor Committee represent districts which are heavily conservative and have limited, if not zero, fondness for protecting the interests of SEIU and the Louisiana Association of Educators, for example.

But politicians are nothing if not squeamish when it comes to being threatened by special interests, so it’s not a colossal surprise that union pressure is scaring even Republican legislators into lamentations over having to vote on Paycheck Protection.

The issue is coming to a head, moreover, because HB 418 goes to the House floor tomorrow for a vote. And the vote is close, with the battleground being Republicans – including some of the same people who cast some decidedly non-conservative votes on tax hikes last Thursday.

To say that hard feelings among conservative voters persist toward some of their tax-raising state legislators would be a grave understatement based on our conversations with many of the activists on the Right we’ve talked to. And now, with Paycheck Protection at the forefront, those hackles are likely to be raised even more should the bill not pass the House.

This is manifesting itself in some interesting ways. For example, Americans For Prosperity’s Louisiana chapter just blasted out an e-mail on the Paycheck Protection bill…

Last week, we emailed you about a key victory we had in the House Labor and Industrial Relations committee when the Paycheck Protection legislation was passed and sent to the House floor. Your phone calls and emails made that possible.

Now, Paycheck Protection, H.B. 418, is scheduled to get a vote in the full House — TOMORROW!

We’ve identified 7 key lawmakers who still need help being persuaded that state government should not be in the business of collecting union dues. Their names and numbers are below — can you help us get as many calls out to them as possible?

We need to tell these guys that pro- government union special interests should not take precedence over the taxpayer. But we feel that your tax dollars have no business subsidizing government union politics — on causes you may or may not like!

Thank you for carrying this legislation so far, let’s make one more push!

That’s a relatively nondescript statement from AFP. It’s declarative, and it means business, but it’s not overtly aggressive in a “tell these SOB’s we’re gonna wipe them out in the fall if they don’t vote for this bill” type of way.

On the other hand, there is this, which is apparently now circulating on the House floor. We’ve not seen anything like it in recent memory… 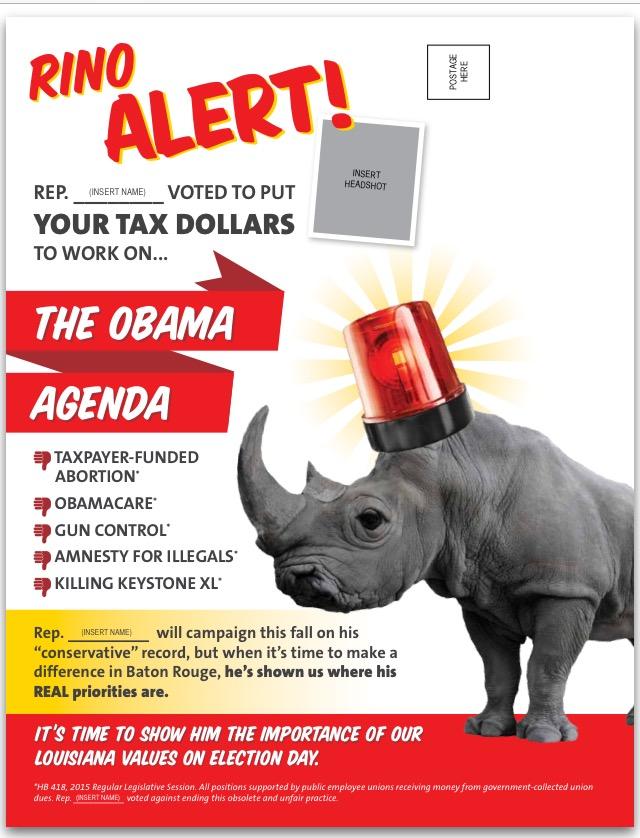 Now THAT is what’s known as hardball.

We don’t know who’s circulating that mailer (if that’s what it is; we just got hold of a PDF copy, so we can only assume it’s set up as a mail piece), but whoever is doing it is proving something we said last week – namely, that so many of these squishy Republicans who think voting for a bill like Paycheck Protection in an election year is a burden owing to how tough their political enemies will take a “yes” vote had better start paying attention to what happens when they decide to abandon their friends.

Because in this session, where the supposedly-Republican House of Representatives has rushed off to raise the better part of a billion dollars in new taxes on business without even having a bill to close a SUNO reach the House floor, the people who are going to be motivated to take down Republican incumbents aren’t going to be the unions, who are waning in influence in Louisiana anyway. After Thursday’s tax orgy, the aggrieved parties are the people who just potentially had their taxes increased by hundreds of millions of dollars. Pile a bad vote on Paycheck Protection on top of the tax vote, and that RINO Alert flyer will look like a Swedish massage.